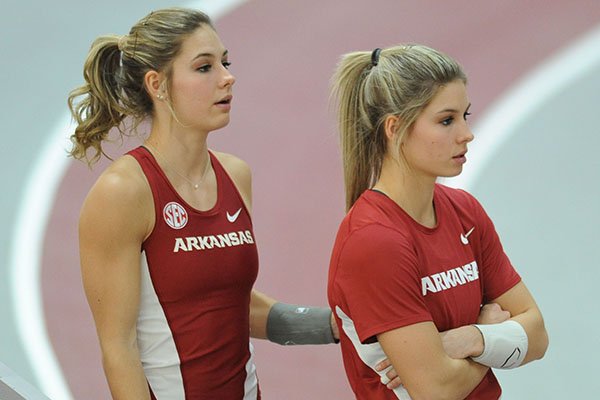 Lexi Weeks (left) and Tori Weeks of Arkansas speak Friday, Jan. 27, 2017, during the pole vault competition in the Razorback Invitational in the Randal Tyson Track Center in Fayetteville.

FAYETTEVILLE — It’s going to be a busy summer for Lexi and Tori Weeks.

Not only are the sophomore twin sisters and All-American pole vaulters from Cabot competing for the Arkansas Razorbacks at the NCAA Outdoor Track Field Championships this week and at the U.S. Championships in August, but they’re also getting married.

“We’ve done everything together since we’ve been born,” Lexi Weeks said. “We didn’t necessarily know we were going to be planning weddings at the same time, but it’s fun just to be sharing life’s moments together.”

The Weeks sisters will be each other’s maid of honor.

“It’s crazy,” Tori Weeks said. “We’re trying to wedding plan and do track, but also trying to keep them separate so they’re not conflicting.

“Right now the focus is track with the national meet coming up. It’s very stressful, but also really exciting.”

Lexi Weeks, who competed for the United States in the Summer Olympics in Rio de Janeiro, is looking to win her third NCAA pole vault title after sweeping indoor and outdoors as a freshman.

At this year’s NCAA indoors, Lexi Weeks finished seventh with a best clearance of 13 feet, 9½ inches after winning at 15-2½ to win last year.

“Coming off the Olympics, there were these expectations that I had for myself and my coaches and teammates had, so that was kind of hard to deal with going into the indoor season,” Lexi Weeks said. “I was an All-American and that’s something to be super excited and proud of, but I definitely didn’t finish like I wanted to jumping 13-9.

“It wasn’t satisfying, but I think it gives me motivation outdoors that I don’t want that to happen again. I want to jump some big bars and defend my title.”

Lance Harter, coach of the University of Arkansas, Fayetteville women’s track, said it’s understandable Lexi Weeks would have a challenging indoor season after competing from January through August last year.

“Lexi had such a long, long year, capped by the Olympics,” Harter said. “After that, there’s a huge letdown.

“A lot of people talk about the post-Olympics blahs. I think it affects everyone that’s on that team, but she’s really starting to gain momentum now.”

Lexi Weeks edged her sister for the SEC outdoor title with both clearing 14-7¼, but Lexi winning based on fewer misses. Tori Weeks won the SEC indoor title — when both sisters cleared 15-1 — because of fewer misses.

“It’s kind of fun that we have it where she wins this meet, I win the next meet,” Lexi Weeks said. “But we’re just pushing each other every meet, every step of the way.”

Tori Weeks, who finished fifth at the NCAA indoors this year (14-1¼) after being sixth last year, has improved her personal-best marks this year to 15-1 indoors and 14-11 outdoors. Coming into this year, her best was 14-5½.

“I think I’ve gotten stronger and that’s helped, and maybe I’m a little bit faster and working on technical things,” Tori Weeks said. “My takeoff is definitely better this year.

“Maybe a little bit of confidence, as well.”

The Weeks twins will vault Thursday in Eugene, Ore., at Hayward Field, where last year Lexi Weeks won the NCAA title and finished third at the U.S. Olympic Trials.

“I’ve had some good meets in Eugene, even though it’s always rained,” Lexi Weeks said. “I’ve been happy with my performances, so hopefully I can do the same thing.”

Both twins said they hope to go 1-2 in Eugene.

“I think the most important thing is to remain calm,” Tori Weeks said. “Focus on your training and what you know how to do and just go out and execute and it all comes together.”