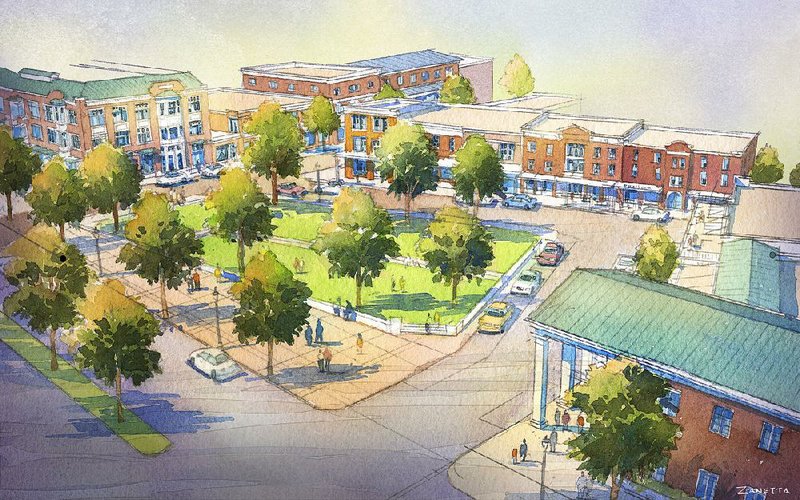 This artist rendering shows Johnson Square, a town square that is under construction in the Northwest Arkansas town.

JOHNSON -- Many of the larger cities along Interstate 49 in Northwest Arkansas are seeing renewed interest in development, both residential and commercial, centered on their growing and evolving downtown districts.

So how does a small city like Johnson, with about 4,000 residents, sandwiched between Fayetteville and Springdale, and without a downtown to speak of, capitalize on the trend? The answer is simple, says developer Ward Davis. Build a town square from scratch.

The Johnson Square development is along Johnson Mill Boulevard, just a quick jaunt from I-49. It covers more than 80 acres and will be developed with an eye toward "New Urbanism," an approach that mixes commercial and residential uses, often with a wide variety of housing options, all with walkable neighborhoods.

Davis said one of the aspects that makes Northwest Arkansas unique is how the larger cities of Fayetteville, Springdale, Rogers and Bentonville have grown into a singular metro area with a mix of communities, each with something different to offer and its own distinct identity. Johnson hasn't been part of that evolution, Davis said, but his Johnson Square project aims to correct that.

"This plan provides Johnson with an instant downtown," Davis said.

Davis and Morgan Hooker are founding partners of Springdale-based High Street Real Estate & Development. Earlier this year, Davis stepped down as chief executive officer of The Village at Hendrix in Conway, a mixed-use development in central Arkansas. Hooker has been a licensed general contractor in several states and most recently worked for Collier's International as a broker focusing on commercial real estate in Northwest Arkansas.

Work on the first phase of the project is under construction with the first commercial buildings going up in early August. It will entail several commercial buildings that will make up the square that could house restaurants, shops and offices. Phase 1 also includes some apartments, perhaps in the office or retail space, along with six townhouses, 14 cottages in the 1,000-square-foot range, and 20 houses from about 1,500 to 4,000 square feet.

"We don't have a lot of any one thing," Morgan said. "It makes the neighborhood more interesting."

Stephen D. Luoni, director and principal designer at the University of Arkansas Design Center, said the Johnson Square development should be a good fit for the town and Northwest Arkansas as a region and it could be a model for future development.

"This project shows what this area wants," he said.

Luoni said the density of the project makes it attractive as a location for express busing or even light rail should the region develop those transit options in the future.

"This project goes back to how older neighborhoods were developed," Luoni said.

Davis and Morgan said the mix of uses along with the various types and sizes of housing results in a community that's diverse and filled with people with different lifestyles, walks of life and ages. The development also will include waking and biking trails along with parks of various sizes that will encourage the neighbors to get outdoors and meet and mingle.

"This will be a place where you can walk your dog or go to one of the parks and sit and read," Morgan said. "It will be nice but not exclusive."

"It puts different flavors of folks together and that builds a strong community," he explained.

He added the shops, trails and parks won't just be for Johnson Square residents and will be a benefit for the town as a whole, adding there are plans to place an 80-acre city park near the development.

The development's trails will connect to nearby neighborhoods with the intent they'll eventually connect to the Razorback Regional Greenway, with its nearly 40 miles of trails that run from Bella Vista in the north to Fayetteville in the south.

Ward said Johnson's centralized location makes it easy to hop to the neighboring cities of Fayetteville or Springdale, either via the interstate or through secondary roads. And a run to Rogers or Bentonville is made easier by quick and convenient highway access. He said that connectivity is a big selling point for the development.

Keeney put it this way, "I always say Johnson is within five minutes of everything in Northwest Arkansas." 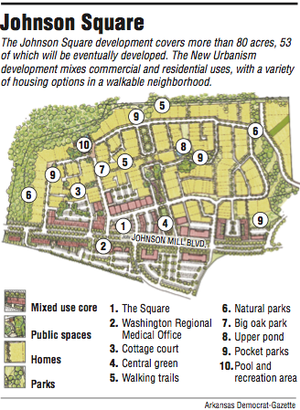 Photo by Arkansas Democrat-Gazette
Information about The Johnson Square development 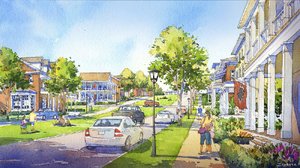 Photo by Special to the Democrat-Gazette
A ground-level view of Johnson Square, shown in this artist rendering, is under construction in the Northwest Arkansas town.