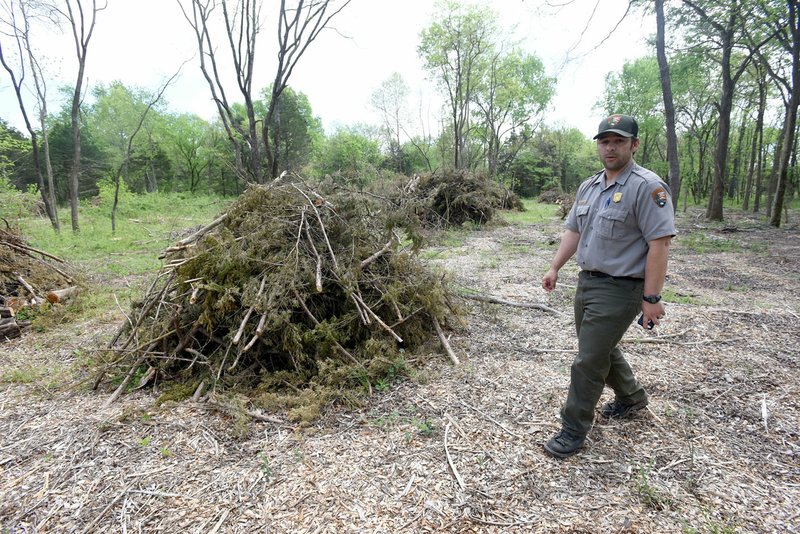 Nolan Moore, with Pea Ridge National Military Park, shows piles of cedar trees that were removed in March to restore a prairie at the park.

We sat in the sun on a slab of rock enjoying lunch next to magnificent Sweden Creek Falls, an 80-foot cascade deep in a Madison County hollow.

There was an ashe juniper tree to our left. An eastern red cedar had roots in the thin soil on our right. All around the box canyon here at Sweden Creek Natural Area were more plant types than you could shake a twig at.

Conversation naturally turned to trees and plants, native and non-native types. And what exactly is an invasive species? Darrell Bowman, director of the Arkansas Natural Heritage Commission, had the answers. The commission oversees Sweden Creek and the state's other natural areas.

Invasive species? Now that can get confusing.

Invasives can be native or non-native species, Bowman explained. Invasive species spread into areas where they're not usually found. They can take over the landscape, preventing growth of other plants that naturally occur there.

Eastern red cedars are a prime example of a native species that's invasive. They are native to the United States and can quickly take over a landscape.

Cedar trees have been in the spotlight this year with glade and prairie restoration projects going on at Pea Ridge National Military Park and Hobbs State Park-Conservation Area. Thousands of cedars have been removed at both parks to restore the land to what it was before being taken over by cedar trees.

That might give the impression that all cedars are bad. They are not.

Cedars likely didn't take over glades and prairies a century or two ago because wildfire regularly strafed the land, preventing invasive species like cedars from taking root. When man began snuffing out wildfires, invasives took over acres and acres. Instead of a tract rich in grasses and plants beneficial to wildlife, lots of open areas became cedar thickets.

Japanese honeysuckle is a common non-native invasive species. There's also a native honeysuckle that is not invasive.

But who doesn't enjoy strolling down a country lane early in the morning and savoring the sweet scent of Japanese honeysuckle? What's not to like about a cedar tree? No problem with either, until they choke out everything else.

Restoration projects sound like all-out war on eastern red cedars, but they're fine in their place. They're attractive and provide shade in yards. At deer season, I like to put tree stands in eastern red cedars. They stay green through winter and provide concealment long after hardwoods have dropped their leaves.

Back in the day, my buddy Hog Ears and I would go to a glade behind our backwoods bachelor cabin and cut a cedar for our Christmas tree. We didn't realize then we were doing a little glade restoration right there on our place.

That was decades ago. If we visited the glade today, I'll wager it's a cedar thicket.