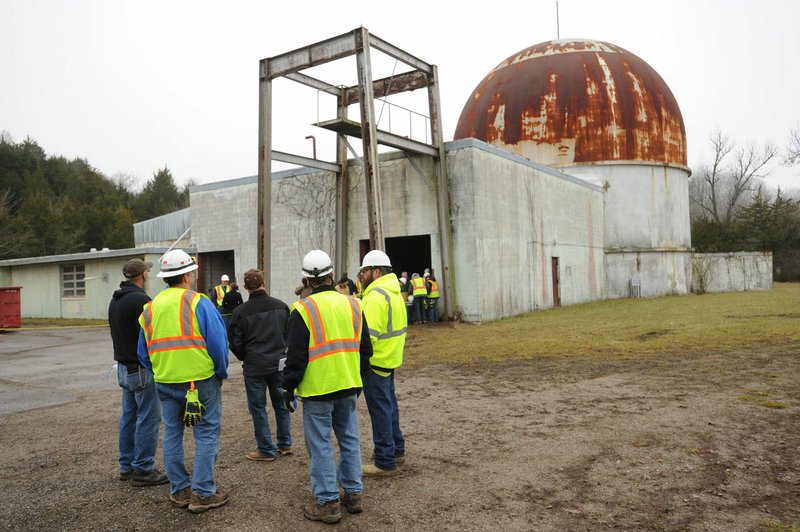 Visitors and officials from the University of Arkansas and Energy Solutions speak Jan. 19 during a tour of the shuttered SEFOR nuclear facility near Strickler in southern Washington County.

But even with some waste hauled away to a specialized disposal facility in Utah, the cleanup project still needs another $10.1 million to remove the radioactive heart of the 1960s-era facility owned by the University of Arkansas, Fayetteville, said Mike Johnson, UA's associate vice chancellor for facilities.

"We are well down the road. The finish line is in sight," Johnson said, estimating the total cleanup cost at $26.1 million.

Federal funding has paid for the recent work, with Utah-based Energy Solutions at the site since January.

Johnson said he thinks more federal funding will come through to finish the cleanup, telling a crowd of about 50 people gathered for a community meeting Thursday in the Strickler Fire Department building that "we're working with our congressional delegation and the Department of Energy."

With funding, the project can be finished by the end of next year, Johnson said.

Cleanup in recent months comes after decades of UA ownership, with university and state officials during that time citing a lack of money as a hurdle to cleaning up the reactor site located about 20 miles southwest of Fayetteville.

The Southwest Experimental Fast Oxide Reactor was built in 1968 with funding from the U.S. Atomic Energy Commission, according to the university.

The 20-megawatt test reactor worked as planned, though it never produced electricity, until operations ceased in the early 1970s. UA took ownership in 1975, expecting to use it as a research tool for graduate students. But by 1986, the site had fallen out of use.

After a $1.9 million federal planning grant in 2009, a $10.5 million U.S. Department of Energy grant awarded in September jump-started the project.

The grant was enough to pay for work through September, including a partial demolition, officials said.

Johnson said a federal appropriations bill approved this year will provide another $5.5 million, allowing work to continue without interruption into the first two or three months of next year.

In a statement, U.S. Rep. Steve Womack, R-Ark., said he was "thankful" for the federal funding approved thus far.

"I have been to the site to see the work and am aware of how important this is to the University of Arkansas. This has been and will continue to be a priority of ours until completion," Womack said.

Since mid-March, work done at the site has also included instrumentation tests helping to determine the site's reactor core is Class C, low-level waste, said Wheeler, referring to a classification system established by the U.S. Nuclear Regulatory Commission. Other radiological materials already driven to Utah were considered to be Class A -- generally the least radioactive of the low-level waste classes, said Wheeler, who works for Energy Solutions.

Class C waste is considered to have a higher concentration of radioactive material than Class A waste, Barbara Hamrick, radiation safety officer at the University of California-Irvine medical center, said in a phone interview.

When it comes to disposal, there are more stringent security requirements for Class C materials aimed at preventing accidental exposure, Hamrick said.

Ongoing work involves using steam to clear away any residual sodium once used to cool the reactor, Wheeler said.

UA hosted a public open house at the site in January, an event attended by hundreds. But much has changed with the recent demolition work.