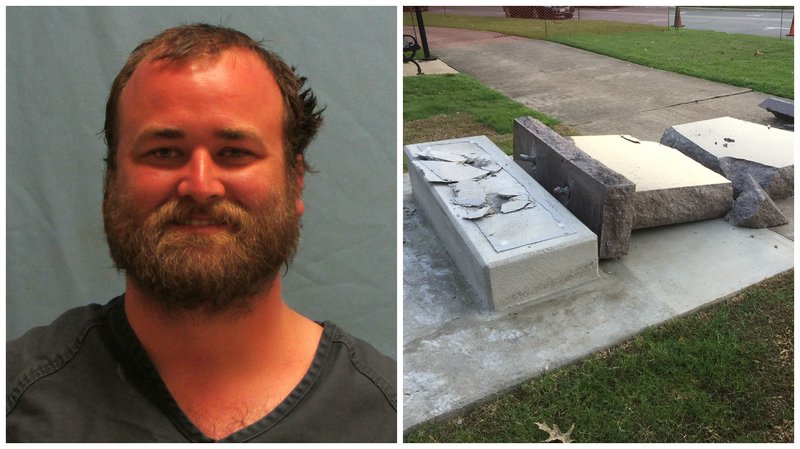 A man accused of ramming and toppling a Ten Commandments monument less than 24 hours after it was installed insisted on representing himself at his first court appearance Thursday morning and interrupted the judge, who said the allegations “shocked” him.

Michael Tate Reed, 32, of Van Buren was arrested by Arkansas Capitol police Wednesday on charges of defacing objects of public respect, trespassing on Capitol grounds, both misdemeanors, and first-degree criminal mischief, a felony.

Reed appeared Thursday morning in Pulaski County District Judge Wayne Gruber’s courtroom via a video feed from the Pulaski County jail. When he approached the camera, Reed appeared calm but then had to be muted as he exclaimed, “My Lord, my God” multiple times and told his public defender he did not need her services.

Public defender Peggy Egan told the judge there may be some “mental health concerns” regarding Reed. She asked Gruber not to consider similar allegations against Reed in a different state before she requested a $10,000 bond.

Reed was previously accused of destroying a Ten Commandments monument in Oklahoma in a similar fashion, after which he was hospitalized for mental evaluation and treatment, according to the Tulsa World.

As Egan was speaking, Reed continued to interrupt her. Only snippets of what he said could be heard inside the courtroom. Gruber told Reed not to make any remarks that could be used against him at a later date.

The prosecuting attorney ran through the claims against Reed as well as his previous convictions on drug possession and driving while intoxicated. The state requested a $100,000 bond.

After listening to both attorneys, Gruber told the courtroom, “I’ve listened to the allegations. Frankly, they shock me.”

“I'm reminded of a much more serious offense, that being the praying folks in the Charleston church who were slaughtered by a gunman," the judge said, referring to the 2015 massacre of nine people in South Carolina.

“The allegations are simply allegations. They must be proven beyond reasonable doubt," Gruber said. "But they are very, very serious allegations.”

He placed Reed on a $100,000 bond. Reed was then led out of the hearing room at the jail by correctional officers. His next court date was scheduled by Gruber for Sept. 7.

The Ten Commandments monument was erected after a legislative push by Sen. Jason Rapert, R-Bigelow. He sponsored a 2015 law to install the Christian monolith on Capitol grounds and helped raise $26,000 in private donations.

According to police, around 4:45 a.m., an officer watched a dark vehicle start from a stopped position and ram the monument. Reed appeared to stream a video of himself charging the 6-foot-tall statue online, officials said.

In a Facebook Live video posted to an account under the name Michael Reed, a driver flips on his headlights and shouts, “Freedom!” as he barrels toward the stone. When contact is made, the video cuts out.

In another Facebook video, a man who called himself Michael Reed told viewers that he was a “firm believer that part of salvation is that we not only have faith in Jesus Christ but we obey the commands of God, and that we confess Jesus as Lord.”

"But one thing I do not support is the violation of our constitutional right to have the freedom that's guaranteed to us, that guarantees us the separation of church and state,” the man said. On the account, he describes himself as a “born again Christian” and a “Jesus Freak.”

The granite monument, which was placed next to a walkway connecting the Capitol to the Arkansas Supreme Court, laid fractured on the pavement Wednesday morning. Crews carted off the debris as reporters swarmed the scene and passersby snapped photos.

Rapert said at a news conference the replacement monument has already been ordered. It will resemble the toppled one and might be protected by steel posts surrounding it, he said.

"We want to put up monuments in every state, every county, every city and every town. And every organization that wants one, we're going to help them do that," Rapert said.