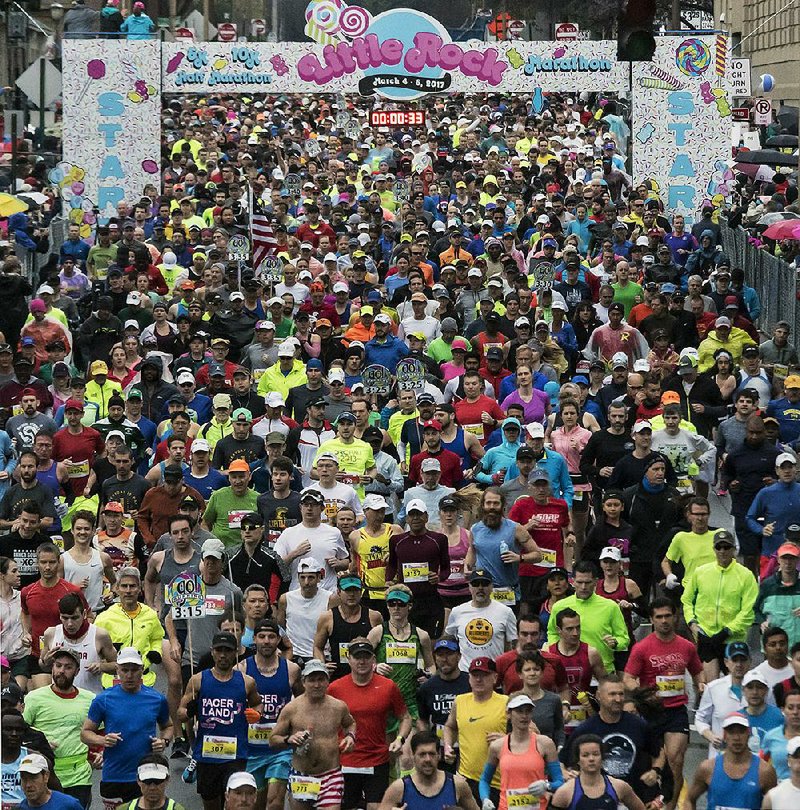 Runners burst from the starting line on Scott Street to begin the 2017 Little Rock Marathon. Nearly 2,500 braved a cold rain and mist to participate in the 15th running of the race, which covered 26.2 miles and began in downtown Little Rock.

Adam Bradbury took the lead halfway through the 15th Little Rock Marathon and pulled away to win through cool rain and mist on the 26-mile, 385-yard course in 2:45:44 on Sunday.

His performance came nine years after he first began to jog, when his objective was common to many.

"I just wanted to get in shape," said Bradbury, a 31-year-old engineer from Bryant said. "I never dreamed about winning a race like this."

Bradbury ran with Chad Silker through the 13th mile, but surged shortly thereafter to take control. Silker finished second in 2:49:29. Jeremy Provence was third in 2:53:26.

Stone, a 38-year-0ld Harding administrator and teacher in Searcy, won the race for the second year in a row. And just like last year, she handed significant credit to her husband John Stone, who takes charge of her race days and their four children.

"He organizes everything," she said "I love the kids being here, and he takes care of them and everything. I call him an elite spectator. He knows exactly where to go. With kids in tow, he does it all. I couldn't do this without him."

John Stone said he arrives with an agenda in mind. On this particular Sunday, he dropped Tia near the starting line, took his children for breakfast, then proceeded to specific mile marks on the course, in this case Miles 4, 9, 16, 18, and the finish. He has learned the tricks of marathon course navigation, primary among them an ability to avoid barricaded intersections and a road-blocking mass of nearly 7,000 marathoners and half-marathoners, with the marathon limited to 2,500 entrants.

"You have to try to get out around the race," Stone said. "If you get stuck somewhere, it's tough."

With no women entrants nearby, Tia Stone said she keyed on men around her for pace support. It wasn't until she turned back for home in Rebsamen Park that she knew her lead among women was safe.

"I figured out I was up five and a half or six minutes," said Stone, who has now completed five marathons. "I know that the last 10K, it's common to slow down, but I thought if I stayed on track, I'd be OK."

Cunningham, a 21-year-old Ouachita Baptist senior, said she realized Stone was out of reach at the turnaround, but that she was nevertheless thrilled. She said this was the first race she has run without listening to music through headsets.

"I was so happy," she said. "I feel like I really took in the whole experience without the music. I could really take it all in."

Manzanares would finish sixth overall in 2:55:36.

Bradbury and Silker ran together through much of Mile 13, but Bradbury crossed the half-marathon in 1:22:45. Silker was second in 1:22:49.

"I wanted the lead there, so I put in a little surge," Bradbury said. "Then I just kept going. I felt really good from there on in. I got a little tight at about Mile 24, but I was pretty sure I could hold on from there."

At 18 miles, Bradbury led Silker by 1:12 as they entered the one long, flat stretch of the otherwise hilly course.

Rainfall increased as the leaders raced through the flats of Rebsamen Park along the Arkansas River, where an unaffected Bradbury passed volunteers bundled in thermal rain gear.

"The rain really didn't concern me," he said. "I usually do better in cold weather."

Bradbury occasionally glanced back, but he was uncertain of his lead until just past the 20-mile mark, where the current route doubles back on itself. He knew then his lead had expanded to about three minutes.

"I felt pretty confident the rest of the way," said Bradbury, who noted that his seventh-place finish in last year's Little Rock Marathon added to his confidence. "I thought I could do better. I put in a lot more work."

Bradbury began his fitness push shortly after he graduated from Arkansas Tech, and he realized he had an aptitude for the sport of road running at least adequate to compete at a local level. He recalled finishing in the top 50 of Little Rock's Firecracker Fast 5K early in his attempts at competition, an achievement of noteworthy significance among central Arkansas runners.

"The secret is just staying consistent," Bradbury said. "As long as you don't take long breaks, you'll start getting faster and faster."