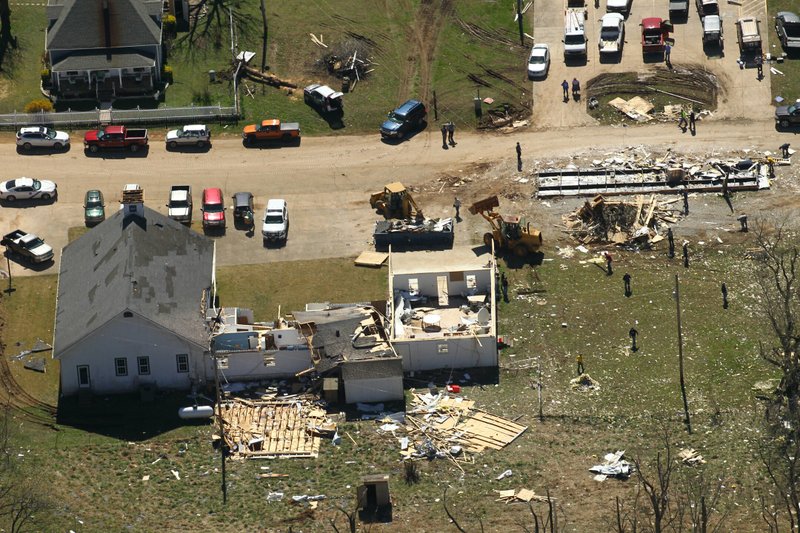 An EF-2 tornado destroyed a post office and damaged a church in Parthenon in Newton County, the National Weather Service.

A second tornado touched down in Arkansas on Monday night as storms swept across the state, the National Weather Service's Tulsa office confirmed Tuesday evening.

The EF-1 twister with 85 to 95 mph winds descended near Crosses in Madison County about 11 p.m.

A handful of workers spent Tuesday morning bent over a field in Parthenon, scooping up scattered scraps of mail from a post office that no longer existed.

The post office, situated near an intersection with County Road 22 and Arkansas 327, had been swept up in an EF-2 tornado that descended on the the small town in Newton County on Monday night, officials said.

The building “kind of did a flip,” said one postal employee from a nearby town who was at the scene. “And a smash. And an explode.”

The twister took the entire structure off its foundation and sent it across the roadway. Volunteers and post office employees showed up Tuesday morning to pick up letters, records, files and paper debris that were strewn about a nearby field. They had filled about three trucks by noon, one worker said.

Wooden, concrete and metal fragments were being pushed into a big pile and hauled away by crews. Nothing was left except a patch of smooth concrete where the building once sat on the opposite side of the road.

The office was one of at least two buildings that were totally destroyed in the twister, and a church suffered some significant damage, said Beverly Berry, director of Newton County’s Office of Emergency Management. National Weather Service personnel told her that morning the EF-2 tornado reached 120 mph winds and stretched a half-mile wide, she said.

A few power lines went down, and some trees and barns blew over, Berry said. Still, only one person received minor injuries, and that person refused medical treatment, she said. Authorities went around last night to make sure everyone in the community “made it through OK,” she added.

Tuesday morning, they’ve had an outpouring of community members and local groups come out, asking what they could do to help, Berry said. They’ve had to turn volunteers away because they didn’t know where to put them.

Among the people cleaning up the wreckage was Jamie Morgan, who teaches Sunday school to elementary-schoolers at the Parthenon First Baptist Church. She was trying to navigate a landscape of debris to reach her bookshelf inside her classroom.

A large swatch of the church’s roof had been torn off, and a mound of cinderblocks and splintered wood lay between Morgan and her destination. She hoisted the blocks onto a ledge, and her sons helped carry the bricks away to another pile.

Morgan, who has lived near Parthenon all her life, joked that her kids would be thankful the Bingo game survived. She and her husband slept through the storm, but when they surveyed the damage Tuesday morning, it was “pretty much what we thought” it’d be. Whenever something like this happens, locals are quick to lend a hand, she said.

Meteorologist Sean Clarke said the storm system that hit Parthenon in Newton County contained an EF-2 tornado. The survey team said the tornado had winds up to 120 miles per hour and that it was about a half a mile wide.

Clarke said Parthenon’s post office was destroyed — the modular building ended up in a church parking lot across the street.

“It looks like it was rolled off its foundation,” he said.

The United States Postal Service said in a news release that the Parthenon Post Office would be closed "until further notice."

Customers should use the Jasper Post Office at 412 W. Court St. in Jasper instead of the Parthenon Post Office, according to the release.

In nearby Searcy County, Clarke said he had heard of “significant” damage done by the same storm system. Two houses were destroyed in St. Joe, he said.

Some storm damage was reported in Faulkner County, and trees were down across Arkansas, Clarke said.

He didn’t know if the trees in Faulkner County were the result of a tornado or straight-line wind damage but said the weather service sent a team there as well.

A couple woke up to find a tree lying on their house and a roof was torn off another house. No injuries were immediately reported.

Other residents lost shingles and trampolines, and some said their fences were down.