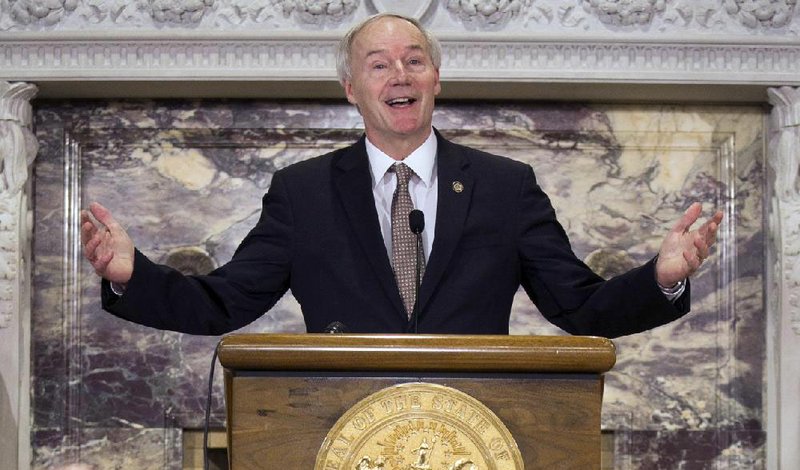 Gov. Asa Hutchinson, at a news conference Wednesday, speaks out in support of the bill to separate Robert E. Lee’s name from the holiday now shared with Martin Luther King Jr., setting a state memorial day for Lee in October.

LITTLE ROCK — Gov. Asa Hutchinson says a Republican proposal to replace the federal health overhaul is "inadequate" for Arkansas, but says the U.S. House should move forward with the proposal so the Senate can address concerns he and other governors have raised.

Hutchinson told members of the Political Animals Club on Friday that the House GOP proposal to replace the Affordable Care Act shifts too much costs to the state, doesn't cover all of the people Arkansas is currently covering and doesn't grant the state enough flexibility. More than 300,000 people are being covered through a hybrid Medicaid expansion in Arkansas under the federal law.

Hutchinson urged Congress to listen to concerns from governors and said he expected the measure to "change significantly" in the Senate.

LITTLE ROCK — Arkansas Gov. Asa Hutchinson says he supports a proposal to ask voters to raise fuel taxes to fund highway improvements but says it's too soon to say whether he'd actively campaign for the initiative next year if it's put on the ballot by lawmakers.

Hutchinson told The Political Animals Club on Friday that he supports a pair of bills heading to the House floor that would ask voters to approve a 20-year bond issue to raise $200 million annually for the state's roads. The bonds would be repaid by levying the state's 6.5 percent sales tax on the wholesale price of gasoline and diesel. The tax would only take effect if voters approve the bond issue.

The Republican governor said the plan leaves the decision ultimately up to voters.