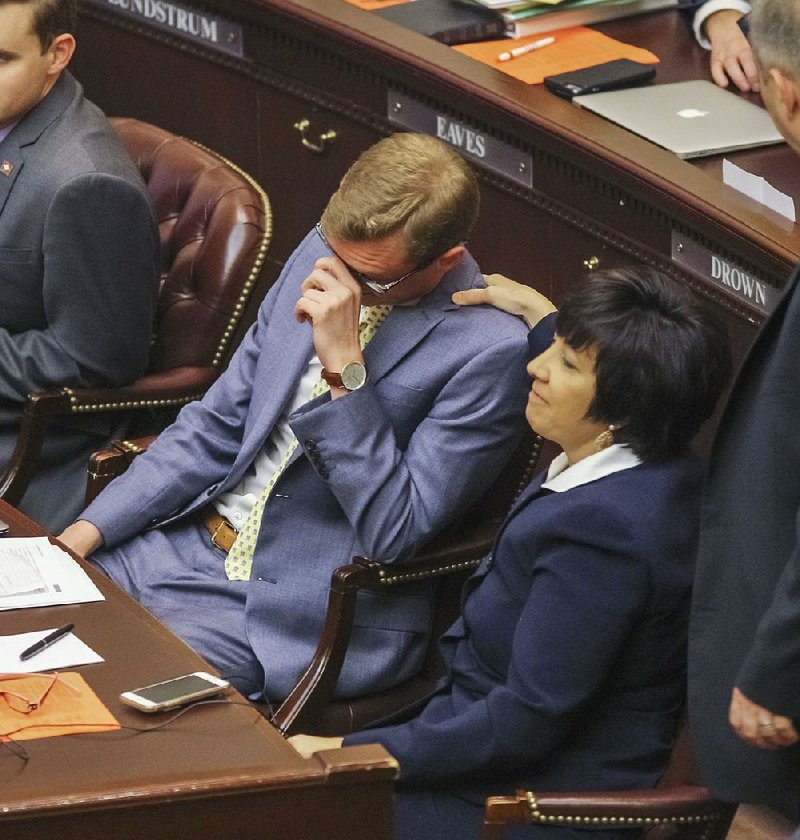 The great-great-grandson of a man who left Mississippi to fight for the Union got the last word Friday in a yearslong debate over Arkansas' single-holiday celebration of both Martin Luther King Jr. and Robert E. Lee.

Then, with a vote of 66-11, the House voted to remove Arkansas from the trio of states still celebrating the Confederate general on the same day as the civil-rights icon. Republican Gov. Asa Hutchinson announced he will sign the legislation, Senate Bill 519, at 12:45 p.m. Monday in the Governor's Conference Room at the state Capitol. Then King will have the holiday alone, a day off for state workers, just like the federal holiday.

A snowy-haired Democrat from Fort Smith, Rep. George McGill, took a rare venture from his back-row seat to speak from the well of the House chamber. For most of the 12 minutes he spoke, his colleagues remained dead quiet despite having sat for hours in an unusually long Friday session.

"Let's let our painful emotions rest a minute," began McGill, who followed two pairs of speakers on each side of the King/Lee debate.

He lamented how little he knew about his own ancestor's journey to Arkansas, and how much of the history surrounding the Civil War has been influenced by the painful memories on each side.

"We're gonna leave it to the educators to talk about things we're not sure of," McGill said. "What we will have done is create a framework of education so our children will know the truth.

"Arkansas is much bigger than its footprint; our governor recognizes that."

In addition to striking Lee's name from the January holiday, SB519 prompts the state education commissioner to develop a curriculum on civil-rights leaders, as well as Arkansas' history in the Civil War.

Lee still would be recognized by gubernatorial proclamation on the second Saturday in October, though state workers would not have the benefit of a holiday off work. Opponents have argued that that's a reduction from the status he currently has on the joint holiday.

"I'm mad," said Rep. Jana Della Rosa, R-Rogers. "We are taking Robert E. Lee and we are putting him in the basement and acting like we are embarrassed he ever existed."

Changing the holiday would lead to the state having to make other revisions, including to the state flag, suggested Rep. Brandt Smith, R-Jonesboro. The blue star located above the state's name on the flag commemorates its place in the Confederacy.

Smith's comments immediately prompted a call to order by several Democrats who argued he was not speaking about the topic at hand.

The debate over the King-Lee holiday began just a few years after it was signed into law in 1985 byGov. Bill Clinton. Attempts to have the name removed -- including two bills filed in 2015 -- have elicited vocal reactions from the Sons of the Confederate Veterans.

In January, Hutchinson threw his political clout behind splitting the observances, declaring that a bill to bifurcate the holiday was on his list of legislative priorities for the 2017 session.

After SB519 was filed last month, Hutchinson held a news conference to publicize the legislation, and he showed up in committee meetings to personally advocate for its passage, something he has never done for another piece of legislation, a spokesman said.

"The support for a separate holiday to recognize Martin Luther King far exceeded my expectations and speaks well of the General Assembly and our state," Hutchinson said in a statement Friday, which also announced Monday's signing ceremony.

The addition of a curriculum requirement also allowed SB519 to be considered in the education committees of the House and Senate, where the bill received support earlier this month. It was in the House State Agencies and Governmental Affairs Committee where opposition in 2015 sank both attempts to split the Lee-King holiday.

After McGill spoke, his colleagues remained quiet. Another representative who had signaled his intention to speak for the bill did not, and its House sponsor, Rep. Grant Hodges, R-Rogers, did not say anything in closing.

The vote of approval followed, and the House adjourned for the weekend after voting on a few other unrelated pieces of legislation.

"Best I've ever seen in this chamber," remarked Rep. Clarke Tucker, D-Little Rock, as he walked down the hall afterward.