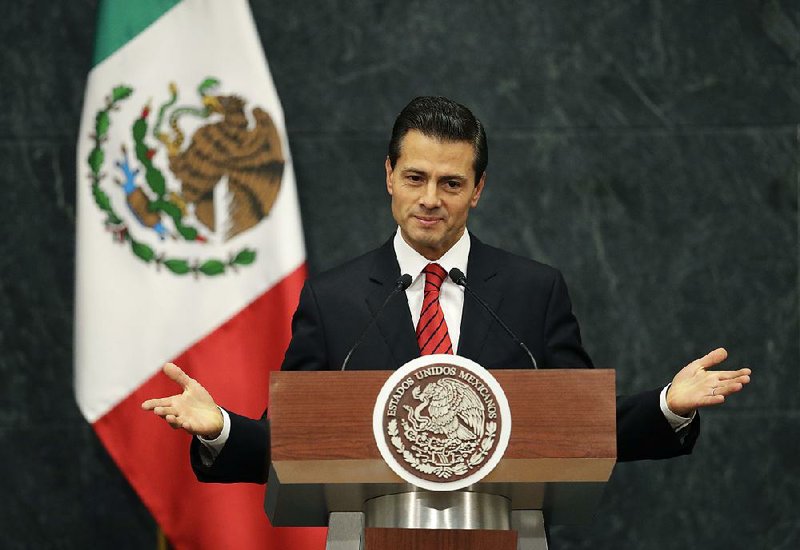 MEXICO CITY -- For more than two decades, free trade has been at the heart of Mexico's relationship with the United States, responsible for pumping a stream of vehicles, audio components and avocados north and cheap corn, cattle and software south.

To the nation's leaders, it was vital and non-negotiable -- until President Donald Trump came along, promising to upend nearly $500 billion in annual trade between the two countries if it could not be re-engineered more in the United States' favor.

While free trade has long been an article of faith in Mexico, uncertainty over the fate of the North American Free Trade Agreement is hitting the country hard.

There has been an abrupt slowdown in foreign investment, pinching off much-needed capital as investors wait to see how things shake out. Last year, such investment fell by 6 percent, a prelude to what analysts predicted will be a 21 percent drop in 2017.

Mexico and its investors say they need certainty.

For the moment, the Americans are not giving it to them and don't seem in a rush to do so. This month, Commerce Secretary Wilbur Ross said it would be later in the year before real talks even started -- after a mandatory 90-day consultation period with Congress, which has yet to start.

The delay has irked the Mexicans, who didn't want to renegotiate the pact in the first place.

"From the Trump and American perspective, this is purely an optional problem," said Michael Camunez, the president of ManattJones Global Strategies and an assistant secretary of commerce in the Obama administration. "They have taken one of the most productive trade relationships in the world and amazingly have turned it into a problem."

Driving the pressure is a delicate political environment in Mexico. President Enrique Pena Nieto's approval ratings are near single digits, and further delays in clarifying the future of NAFTA could imperil not only growth but also employment at a time when the government can least afford to lose support.

Adding to the uncertainty are midterm elections in the state of Mexico, the country's most populous, from which the president hails.

The state, a longtime center of power for Pena Nieto and his party, will hold elections June 4. A loss would be a devastating blow to the party, which has never lost there before.

And the longer the Americans wait on NAFTA negotiations, the more political pressure it places on Pena Nieto, reducing the flexibility he has to accommodate demands from Trump's team.

"The longer we wait, the harder it is going to be for Trump to get what he wants because the nationalist pressure on Pena Nieto will be cumulative," said Pamela Starr, an associate professor of international relations at the University of Southern California.

"The longer he is in the presidency, from today forward, the more of a lame duck he is."

Already, the Mexican government has grown more stridently critical of the Trump administration's stance on NAFTA. The Mexican economic minister has said the nation will walk away from any deal that does not suit the country's needs, and even proffered a list of deal-breakers: any sort of discussion of paying for a border wall, taxing remittances or carrying out a border adjustment tax.

"When you know the kind of value chain that we have, you understand that it is a very difficult world to destroy, almost impossible," said Juan Pablo del Valle Perochena, the chief executive of Mexichem, a Mexican chemical and building materials manufacturer.

"There is so much at stake, of course, more for Mexico than the U.S., but there is a lot of value already in place. And when people understand that, they don't worry so much."

Information for this article was contributed by Paulina Villegas of The New York Times.