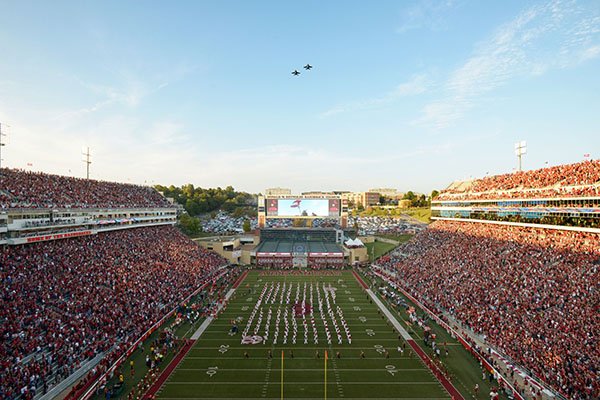 Fighter jets fly over Donald W. Reynolds Razorback Stadium prior to a game between Arkansas and Ole Miss on Saturday, Oct. 15, 2016, in Fayetteville.

The Southeastern Conference on Tuesday released a statement saying a recently passed state law to allow guns in many public facilities, including those hosting college athletic events, "could negatively impact" Razorback athletics.

Later in the day, a legislative committee voted to recommend a bill -- opposed by the National Rifle Association -- that would amend the law and exempt from it some facilities, including college sports venues.

Under Act 562, people who have licenses to carry concealed handguns and have up to eight hours of extra training will be legally allowed to take their guns onto public college campuses and into bars, churches and most public buildings, including the state Capitol. The law's effective date is Sept. 1, but first the state police must devise the weapons training program. More than 200,000 Arkansans have concealed carry weapons permits.

Earlier in this year's legislative session, while HB1249 was moving through the Legislature, officials from the University of Arkansas, Fayetteville, which is a member of the Southeastern Conference, and other universities asked lawmakers to consider preserving the status quo. Previous law allowed the boards of public colleges and universities to adopt gun-free policies on their campuses. Every campus in the state adopted such a policy.

After HB1249 was amended to remove exemptions for sporting events, concerns arose about the packed crowds at Donald W. Reynolds Razorback Stadium in Fayetteville, where the UA football team competes in Southeastern Conference play.

"Given the intense atmosphere surrounding athletic events, adding weapons increases safety concerns and could negatively impact the intercollegiate athletics program at the University of Arkansas in several ways, including scheduling, officiating, recruiting and attendance," Sankey said in his statement Tuesday.

When asked about the new policy, Arkansas Razorbacks head football coach Brett Bielema told reporters this week that concerns about the law had permeated the football program.

"My only thing that jumps out right away was concern with how it was going to be handled," Bielema said.

"When I say to a parent, 'I take your son's safety to the highest degree in my heart,' I don't ever want to put that in jeopardy. I knew that was going to be a question. I think in today's world everybody comments, but it sounds like there are going to be a couple different options coming up so I'll just lay quiet until we get the rule and go about it from there."

As early as last week, lawmakers began attempts to roll back the scope of Act 562.

On Thursday, the Senate rushed out legislation by Senate President Pro Tempore Jonathan Dismang, R-Searcy, that would add exemptions for the University of Arkansas for Medical Sciences, the State Hospital and venues that host college athletic events.

That measure, Senate Bill 724, was amended Tuesday and then approved by a split House Judiciary Committee. SB724 now goes to the full House.

The latest amendments to SB724 sought to bridge the gap between colleges' concerns -- reflected by Tuesday's Southeastern Conference statement -- and the NRA, which supported the legislation to create Act 562.

Proposed by Rep. Bob Ballinger, R-Hindsville, the amendment filed Tuesday would require colleges to send state police a security plan designating a "firearm-sensitive area," inside which guns would be banned. It also would prohibit guns from public day care centers.

Private universities, bars and churches would no longer have to post signs to prohibit concealed handguns under the amendment, but licensed carriers would not be charged with crimes for taking their guns onto the property.

The amendment set out in SB724 failed to satisfy an NRA official and angry citizens who spoke against the bill before the Judiciary Committee.

Ballinger said he had reluctantly agreed to work on amending SB724 because he had been a strong proponent for the legislation to expand concealed carry of weapons.

He called most concerns in response to Act 562 "overblown," but said it could jeopardize Arkansas' consideration for hosting major sporting events such as Southeastern Conference track championships or NCAA basketball tournament games.

"The issue is that maybe we took 10 steps forward, and a lot of people weren't ready to go quite that far forward," Ballinger said. "So now we're taking one step backward."

That put Ballinger and other lawmakers who had touted their pro-gun rights voting records in the unfamiliar position Tuesday of voting with Democrats against the NRA.

No members of the public supported SB724 before the committee. The votes of three Democrats helped push the bill over the threshold needed to advance it.

Asked if lawmakers who support SB724 would see their NRA ratings slip, the association's Arkansas lobbyist, Anthony Roulette, told a reporter that that had yet to be decided.

"That's a decision our [political action committee] makes," Roulette said. "But it's a key vote, yes."

Others said they were prepared to call out Republicans who voted in support of SB724. Jan Morgan, a gun range owner from Hot Springs, is also a Fox News commentator on gun issues.

"I am going to be your worst nightmare in your district," Morgan told the committee members.

While House lawmakers can now consider the measure, the changes adopted Tuesday mean that the bill will have to return to the Senate for approval of those changes.

The current session of the General Assembly is scheduled to recess early next week, and lawmakers have until then to approve any changes to Act 562.

Information for this article was contributed by Tom Murphy of the Arkansas Democrat-Gazette.