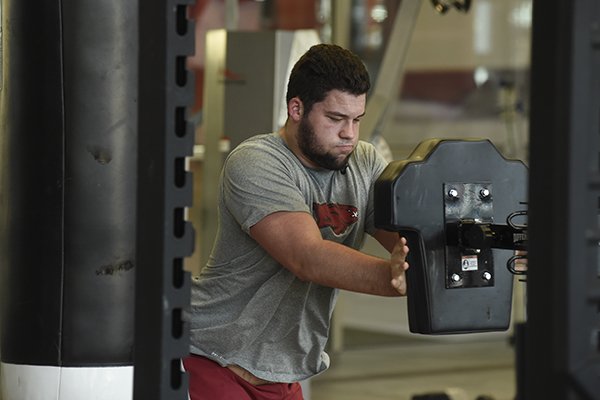 But Herbert, after consultation with Coach Bret Bielema, might have outdone himself on the recently concluded eight-week winter training regimen.

The aim was to stress the "finishing" aspects of workouts after the Razorbacks struggled in the second halves of games throughout their 7-6 run in 2016.

"I mean they pushed us," junior running back Rawleigh Williams said. "It wasn't easy by any means, but it was definitely something that they wanted us to respond to."

The Razorbacks are trying to transfer the momentum of their vigorous winter conditioning into spring drills, which continue with practice No. 2 today at the practice fields at the Fred Smith Center.

Bielema, in his pre-spring news conference Monday, described the winter work as "the most intense," physically and mentally, of his five winters in Fayetteville.

Senior defensive tackle Bijhon Jackson pointed out the importance of going through all of conditioning without one player missing or even being late for a workout. It marked the first time that has happened in Bielema's tenure at Arkansas.

"That was a big growing period as far as accountability is concerned," Jackson said. "I believe that's a big thing that's held us back so far. Guys not being accountable to each other and themselves. I think we took a big step forward with that."

Arkansas players described the conditions Herbert and his staff created for workouts, held largely in the Walker Pavilion.

"It was a lot more intense," senior safety Josh Liddell said. "Between conditioning and workouts with coach Herb, it just felt like everything was twice as hard this year.

"We went longer a little bit more. We really kind of focused on straining to finish, because last year we didn't finish a lot of games well."

The "mat drills" were symbolic of the tough workouts.

"Those mat drills we had for about four weeks were ... we had some guys falling out, throwing up. It was a grind to get through that," senior quarterback Austin Allen said. "They kind of put a mental grind on us just doing some things, and then also just five days a week for eight weeks, it kind of wears on you. I thought it made us better."

Liddell said the focus was on finishing a drill strong.

"You know coach Herb, he changes it up every year," Jackson said. "Especially with the mat drills. Mat drills are tough.

"The last day of mat drills we did two rounds of it. We had never done that before. It was just the coaches preaching to us to make sure we finished. Finished through the line."

Jackson described mat drills as six stations, such as bag drills, cone drills and others.

"Basically all of them were based around some kind of movement, and then a finish," he said.

The Razorbacks hope focusing on the finish will lead to better second-half results after they were outscored 234-137 after halftime in 2016, including 56-0 in their final two games against Missouri and Virginia Tech. Arkansas outscored opponents in the first half 257-170.

Print Headline: Winter of discontent: Conditioning ramps up after collapses