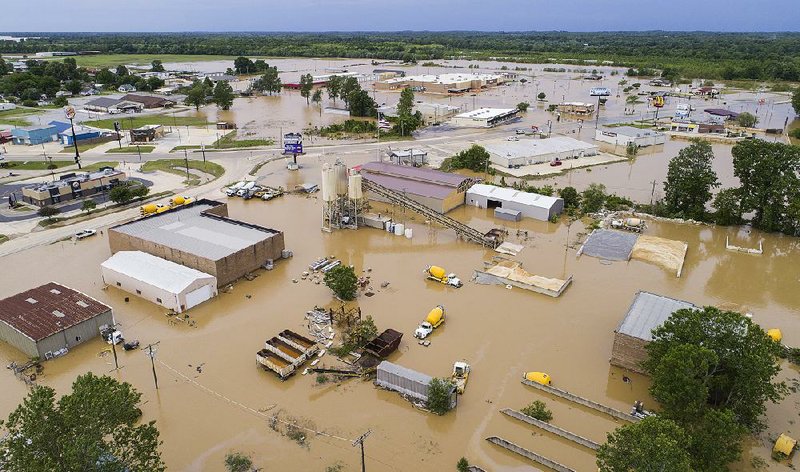 Water from the Black River covers businesses Wednesday on U.S. 67 in Pocahontas after rising to a record level Tuesday night.

Nine sections of a levee system along the rain-swollen Black River near Pocahontas failed Wednesday morning, sending a rush of water toward Lawrence County, closing U.S. 63 and prompting officials to urge residents in the water's path to evacuate quickly.

Officials ordered the evacuation of eastern Pocahontas on Monday after heavy weekend rains caused the Black River to reach a record high. The storms pounded much of northern Arkansas. At least seven people died because of the weather.

The Black River rose to 28.95 feet in Pocahontas at 10 p.m. Tuesday, breaking the previous high mark of 28.4 feet set in 2011. Because of the levee breaks Wednesday, the river level in Pocahontas dropped a foot and a half by evening.

Although the breaks provided Pocahontas a respite from the water, areas south of the town braced Wednesday for an onslaught.

"We're surrounded by water," Portia Mayor Kelly Duckworth said. "The water is rising 1 foot an hour. We don't know what to expect."

Duckworth said she asked the 437 residents of the Lawrence County town to evacuate but had not issued a mandatory evacuation order Wednesday. Portia is on the eastern banks of the Black River, just west of the Running Water Ditch, which swelled with water from the broken levee.

The Arkansas Highway and Transportation Department closed U.S. 63 at U.S. 67 about noon as water poured over the Burlington Northern Santa Fe Railroad tracks and the adjacent four-lane U.S. 63.

The highway also was closed at the Black River bridge in Black Rock in Lawrence County.

"There is a tremendous amount of water coming" downstream, said Alan Walter, a construction engineer with the Highway Department's district office in Paragould.

"The water was rising at a slow pace at 2 a.m. today. Next thing, it suddenly went up 2 feet. We knew something had happened."

Highway Department personnel worked through the night Tuesday building a rock barrier to deflect water from U.S. 63 at U.S. 412 to try to save the roadway.

Traffic was diverted onto U.S. 67 on the eastern side of the roadblock and onto Arkansas 117 in Black Rock on the western side of it. Motorists traveling from Jonesboro north to Pocahontas now must drive south to Bald Knob and then north to Batesville and Hardy to reach U.S. 63 -- a four-hour detour.

"It's a trying time for local travel," Walter said.

He said once the water recedes, highway crews will inspect the roadways for damage before reopening them.

Railroad workers shored up a trestle near Portia to prevent it from eroding in the swift current.

Water rushed down the Running Water Ditch toward Lawrence County and Portia, prompting the recommended evacuations of Portia, Clover Bend and Coffman, which are all along the Black River.

"It's coming up quickly," Yates said of the water Wednesday afternoon. "We're asking people to leave on a voluntary basis while they can."

Walnut Ridge Mayor Charles Snapp said city workers were filling sandbags Wednesday and offering assistance in the county. He said his town had not seen any major flooding Wednesday, but he was concerned that water could overflow several drainage ditches south of Walnut Ridge.

"If it begins backing up, we're going to see problems," he said.

The Village Creek Ditch runs through Walnut Ridge, which could see major flooding if the water rushing through the levee breaks doesn't flow quickly back into the Black River north of Portia.

"If it doesn't go there, the only place for it to eventually go is Village Creek," Snapp said.

"We've never seen anything like this. We have days ahead of us where we won't know what's going on. People want answers, but I have no idea. I've seen water in places I've never seen before.

"We are as prepared for this as we can be," he said.

The levee system near Pocahontas also failed during flooding in 2008 and 2011, and water followed a similar path toward Lawrence County. Both times, Walnut Ridge was spared major flooding.

The 8.7-mile Running Water levee was built in the early 1900s. In 1932, the U.S. Army Corps of Engineers, which had overseen its construction, turned its maintenance over to a local levee district.

However, Jansen said, the district disbanded in 1960 because of lack of funds, and the levee sat ignored for more than 40 years. Trees grew on it, and the root systems weakened the earthen structure. Animals built burrows in the levee, and the structure eroded, Jansen said.

The Corps of Engineers gave the levee an unacceptable rating in 2010.

The Running Water Levee District was re-formed in late 2010, and residents in Randolph and Lawrence counties were taxed 50 cents an acre to help pay for the levee's maintenance. The district took out a loan for $1.2 million to rebuild the levee to its original design from decades ago -- 3 feet higher than the 1927 flood level, or 28 feet.

At the time, the Corps did not analyze options for rebuilding the levee, whose levee district was not considered an active participant in the Corps' Rehabilitation and Inspection Program for levees, said Elmo Webb, levee safety program manager for the Corps in Little Rock.

"Our intent was to get it back to the original level of protection," Webb said.

The Corps rated the levee as "minimally acceptable" after inspections in 2013 and again in December 2016. In its latest inspection, the Corps noted concerns about too much vegetation and encroachments on the levee, according to memos obtained by the Arkansas Democrat-Gazette.

"The levee did its job," Jansen said Wednesday. "It was built for 28 feet. We had water going over it."

During a news conference Wednesday, Gov. Asa Hutchinson said he increased the number of National Guard personnel deployed to northeast Arkansas to 108. Also 25 military vehicles were prepared for high-water rescues.

Hutchinson said he has no doubt that the area will receive a federal disaster declaration.

"Right now, it's all about the protection of lives and property," said the governor, who flew over Randolph and Sharp counties to inspect the flooding Tuesday.

More rain fell Wednesday, and the National Weather Service expects 1-2 inches more before skies clear Friday. Another 2-4 inches of rain are expected farther north in Missouri in an area that received up to 10 inches Sunday. That water ran into the Current River and down to the Black River.

Officials don't expect the additional rainfall to worsen the Black River flooding in Arkansas, but it will prolong the flooding.

"There is still water coming down from Missouri," said meteorologist John Lewis with the National Weather Service in North Little Rock. "It's all coming downstream. It's going to be around for a while.