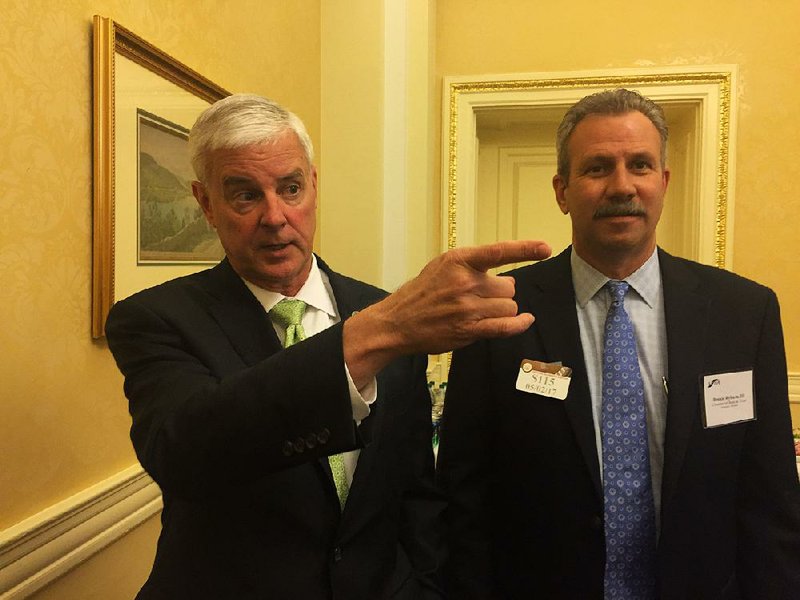 Rep. Steve Womack (left) met with Bennie Ryburn III of Commercial Bank and Trust and several other Arkansas bankers this week at the U.S. Capitol. The visitors urged Congress to roll back some of the rules put in place after the 2008 financial crisis.

Stopping by Capitol Hill this week, they urged lawmakers to roll back some of the rules that were included in the Dodd-Frank Wall Street Reform and Consumer Protection Act.

The law has created an unreasonable and unnecessary burden for smaller banks, they said.

"We have to set up a committee just to deal with the regulations," said Arkansas County Bank's Stuttgart branch president, Gary Oltmann. "[We're] just pushing paper instead of doing customer service."

Member said the law also has taken away some of their discretion.

If a loan applicant doesn't meet the federal requirements, the loan must be denied even if the lender considers it a good risk, they said.

'"Some people are not even getting credit that could get credit before and deserve it," said Martin Carpenter, chairman of FNBC Bank in Ash Flat. "In my opinion ... the restrictions that it put on the community banks is part of the reason that our economy hasn't recovered as well as it should. People haven't been able to borrow money."

The bankers are asking for greater flexibility.

"What we actually hope for is just some relief, fewer regulations and the ability to wait on our customers [and] make loans," said Bennie Ryburn III of Commercial Bank and Trust in Monticello.

The new requirements slow the process for both lenders and borrowers, said Milton Smith, president of First National Bank of Lawrence County in Walnut Ridge.

Smith was one of 100 community bankers who were invited to the White House this week to met with President Donald Trump and Vice President Mike Pence.

"We need [regulatory] relief. I mean, it's incredible the burdens that have come down on us in the past ... 10 years," Smith said.

During the White House visit, Trump described Dodd-Frank as "out of control" and Pence promised that changes lie ahead. "Dodd-Frank's days are numbered," the vice president said.

The bankers' trip to Washington coincided with debate on the Creating Hope and Opportunity for Investors, Consumers and Entrepreneurs Act, called the Financial Choice Act, which supporters say would reduce the regulatory burden on banks of all sizes.

The House Financial Services Committee passed the legislation Thursday along party lines over opposition from Democrats.

Republican leaders haven't said when the entire House will take up the 600-page bill.

"We want to have an opportunity to right-size the financial regulatory system so that consumers and entrepreneurs and businesses have more access to capital and that our community banks are able to maintain their competitiveness with the big global institutions," the Republican lawmaker said.

"It's a positive move. We don't love everything in it but, for the most part, it will help community banks," he said in a telephone interview Friday.

While the bill has elements favored by community banks, it also would roll back some of the restrictions on the Wall Street giants, Padgett noted.

When it comes to assets, the nation's four largest banks tower over the competition. JPMorgan Chase & Co. tops the list with $2.55 trillion; Bank of America Corp. follows with $2.25 trillion, Wells Fargo & Co. has $1.95 trillion and Citigroup Inc. has $1.82 trillion as of March 31, according to ycharts.com.

The failure of one of the big banks could have far-reaching consequences, Padgett siad.

"When an institution like that has trouble or it files for bankruptcy, they're systemically risky. It can hamper the economy of the entire country," Padgett said.

In comparison, the 117 community banks doing business in Arkansas had assets totaling less than $0.07 trillion, according to Independent Community Bankers of America, an industry trade group.

"The community banks, although there were some that failed, they really haven't posed a risk to the national economy or the financial system," said Carpenter, the Ash Flat banker.

Banks deemed "too big to fail" were blamed for the financial crisis, which jolted the markets and required government bailouts.

A Senate subcommittee investigation said the downturn "was not a natural disaster, but the result of high risk, complex financial products; undisclosed conflicts of interest; and the failure of regulators, the credit rating agencies, and the market itself to rein in the excesses of Wall Street."

Dodd-Frank, passed in 2010, was designed to prevent more government bailouts.

It requires banks to hold more capital in reserve and to have more assets that can be more easily liquidated. Large banks also must undergo periodic "stress tests," examining whether they could withstand a crisis similar to the one in 2008.

"There's no reason why a $300 million bank from Stuttgart is regulated the same as a $1 trillion institution. ... That just doesn't make sense," Padgett said.

Supporters of Dodd-Frank say the law made the financial system stronger, though many supporters are open to revisions.

"It's important to keep this in place," Federal Reserve Board Chairman Janet Yellen said at a December press conference.

But she echoed the objections that the Arkansans have raised.

"It's important to look for ways to relieve regulatory burden on community banks and smaller institutions, to tailor regulation so that it's appropriate for the systemic risk profile of the particular institutions," she said.

Community bankers and their larger competitors will work to shape the final legislation.

Going up against trillion-dollar financial institutions is a challenge, Padgett said, especially when those companies have dozens of lobbyists working on their behalf.

"For us to get a seat at the table and a voice is very difficult," he said. "We are the small man on the totem pole."