In part of Arkansas, lawmen still working out policies for medical marijuana 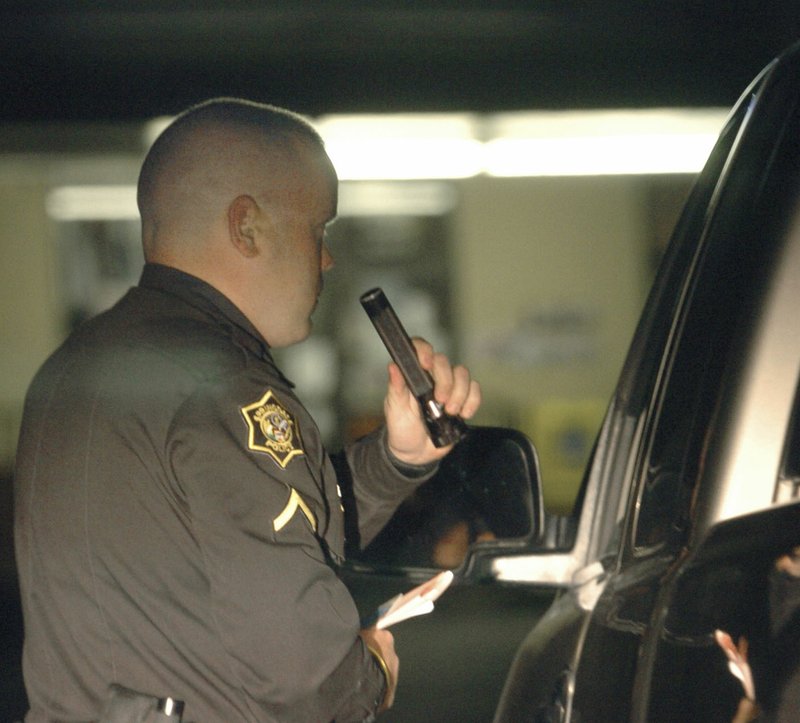 Springdale police officer Robert Hendrix stops a driver in north Springdale in March 2006. The driver was a suspected DWI driver. Legalization for medical marijuana was touted as a means to give police a break from going after nonviolent offenders, but police must work to eliminate the illegal sale of marijuana while regulating the legal market, said Scott Chipman, the southern chairman for Citizens Against Legalizing Marijuana in California

Police must be trained to determine whether a driver is impaired by his medical marijuana use. Courts must adjust zero-tolerance policies to account for legal use. And some worry about how to stop illicit sales.

The law enforcement community has had more than 20 years nationally to adjust to the idea of medical marijuana, and officers in 29 states now have varying degrees of experience with their own medical marijuana programs.

"There may be some slight difficulty getting accustomed to the idea of not arresting a person found with marijuana, and it will take some time for departments to get up to speed with regulations so that they can accurately determine if patients and producers are in compliance," Fox said.

"However, this is simply a matter of training. At the end of the day, it will mean fewer marijuana arrests and allow them to focus on more serious crimes."

Legalization for medical marijuana in California was touted as a means to give police a break from going after nonviolent offenders, but police must work to eliminate the illegal sale of marijuana while regulating the legal market, he said.

Medical marijuana has been available in California for 20 years, and the drug will be legally available for recreational use in 2018, Chipman said.

The first products are expected to be sold before January, as production gets underway, according to an estimate from the state Department of Finance and Administration.

Police can quickly determine if a driver who has been drinking is legally impaired. A breathalyzer test or blood sample that measures 0.08 percent blood-alcohol content or more means a person is intoxicated under the law.

"My top concern is a public safety one -- impaired driving related to marijuana use," Bentonville Police Chief Jon Simpson said. "It will be difficult since there is no sort of standard field test to determine the level of intoxication."

Bonnie Atchison, a staff attorney for Rogers, said a blood sample may help determine the level of intoxicants, but there isn't a specific number pointing to drug intoxication comparable to a blood-alcohol content level.

California is testing a breathalyzer for drugs, according to The Washington Post, but police in Northwest Arkansas don't have anything similar.

Prosecutors also can rely on an officer's testimony to prove a driver was impaired: how the person was driving, whether an odor was coming from the car, or whether an officer saw marijuana or paraphernalia in the car, Atchison said.

Officers also can be trained to detect impairment resulting from drugs, including marijuana, but only the Fayetteville Police Department has several drug recognition experts.

The Fayetteville department also has officers who are certified instructors, and many agencies -- including the Benton County sheriff's office, which has no officers trained in drug recognition -- said they intend to increase training.

"Marijuana is still tough to determine even with a drug recognition expert," he said.

If Arkansas experiences a significant increase in arrests for driving while impaired, it would likely be a result of the additional training for officers and not additional drivers, said Fox with the Marijuana Policy Project.

"Simply put, driving under the influence of marijuana is already illegal in Arkansas, and the people that are going to be doing it after [the] medical marijuana program goes into effect are most likely already doing it," she said.

The implementation of medical marijuana programs isn't associated with any significant increase in overall marijuana use rates, she said, so there isn't a large group of new consumers.

"For the impaired-driving rate to increase, a large number of current consumers would have to suddenly decide that it was OK for them to drive under the influence," Fox said.

"Patients who have just gotten the protection from arrest that they deserve would be risking arrest by driving after medicating. It just doesn't add up."

Tammy Hahn with Mothers Against Drunk Driving said the organization hasn't released an opinion on medical marijuana in the state.

"But of course, we feel it is impairing, just like alcohol and drugs, illegal or prescribed," Hahn said. "So no one should get behind the wheel with any kind of impairment."

Legalized marijuana presents challenges for the judicial end of the criminal justice system as well, judges and prosecutors said.

"I'm not going to allow you to abuse medical marijuana while in drug court," Smith said.

His court will treat medical marijuana the same as other medications prescribed to drug court participants. Smith said his court looks for medical alternatives instead of simply allowing someone to take prescription drugs while under court supervision.

Springdale attorney Billy Bob Webb said drug court judges may have an easier time than judges presiding over criminal cases. Drug courts already have policies or rules for participants' use of prescription medications.

The issue for other judges may be what happens if a probationer tests positive for marijuana and it turns out he has one of the medical conditions and obtained a certification for medical marijuana.

Circuit judges Robin Green and Brad Karren order some individuals with criminal cases in their courts to undergo drug testing. The person is sometimes found in contempt of court and sentenced to jail if the test is positive.

"If a person has a card, then I don't think you can hold them in contempt of court," Webb said. "I think it will fit the same as any other prescription drugs."

In general, the state Department of Health is responsible for defining the rules for patients and doctors, but the state Alcoholic Beverage Control Board will regulate dispensaries and producers under the amendment legalizing medical marijuana.

In Arizona, where medical marijuana became available in 2010, the executive director of the state's Chief of Police Association said the state's Department of Health has a bigger task dealing with licensing issues than police.

Police may become involved when they receive reports of violations, said Jan Strauss. She cited a couple of shops that closed after police found they sold to people without medical cards. 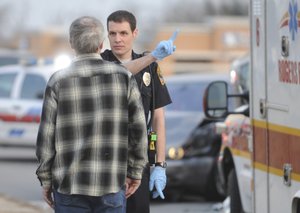 Photo by NWA Democrat-Gazette file photo
Officer Jason Frazier with the Rogers Police Department gives a man a field sobriety test in Februrary 2010 after an accident on Pleasant Grove Road in Rogers. California is testing a breathalyzer for drugs, according to the Washington Post, but police in Northwest Arkansas don’t have anything similar when it comes to checking the marijuana levels of a suspected impaired driver.