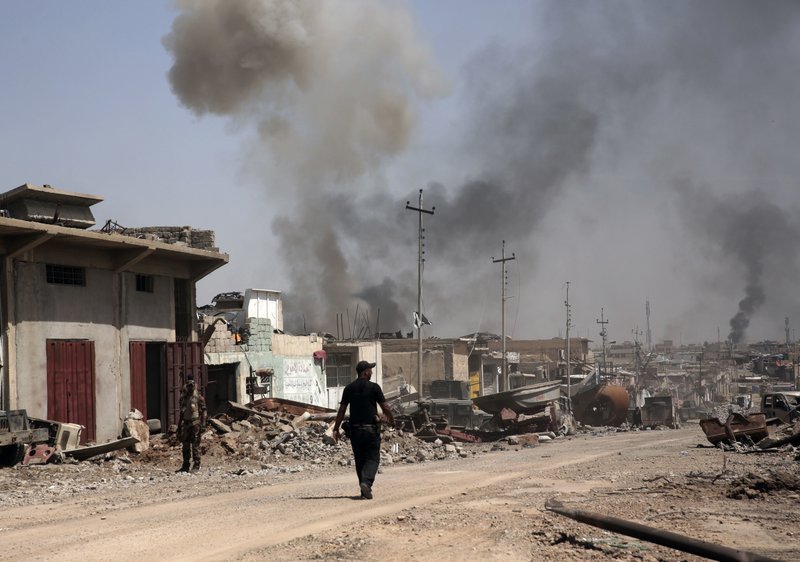 In this Tuesday, May 9, 2017 file photo, smoke rises during heavy fighting between Islamic State militants and Iraqi special forces in the industrial area of west Mosul, Iraq.

BAGHDAD -- Iraq's mostly Iran-backed Shiite paramilitary forces on Monday reached the border with Syria after securing a string of small villages west of Mosul, according to a spokesman for the group.

The move comes after a push by the government-sanctioned forces to retake a number of small villages and key supply lines from the Islamic State militant group in the vast deserts west of Mosul. Iraq's conventional military has focused on clearing the city itself, a slow, grinding process in dense urban terrain packed with tens of thousands of civilians.

The paramilitary forces -- mostly Shiite fighters who have close ties to Iran and who are referred to as the Popular Mobilization Forces -- began Monday's operation by pushing Islamic State militants out of the center of the town of Baaj, some 25 miles from the Syrian border, according to Shiite lawmaker Karim al-Nouri.

The fighters plan to "erect a dirt barricade and dig a trench" along the border, said Sheikh Sami al-Masoudi, a Popular Mobilization Forces leader, describing how the forces would secure the porous border area that has long been a haven for smugglers and insurgent activity.

Al-Masoudi described Baaj as the last Islamic State supply line between Syria and Iraq in the area and said the paramilitary forces reached the border by retaking the village of Um Jrais.

Iraq's army, federal police and special forces launched the operation to retake Mosul in October with close backing from the U.S.-led international coalition. The city's eastern half was declared liberated in January, and the push for the city's western section, separated from the east by the Tigris River, began in November.

Iraqi forces are closing in on the last pockets of Islamic State control in Mosul's Old City, a slow, grueling fight that the United Nations warns could put the more than 100,000 civilians still trapped by the Islamic State at severe risk.

Meanwhile, the Iran-backed Popular Mobilization Forces -- known as Hashed al-Shaabi in Arabic -- has largely operated in the desert to the west of Mosul, retaking small villages and cutting Islamic State supply lines since October.

After securing the border area, Iraq's Popular Mobilization Forces are ready to move inside Syrian territories, according to Hashim al-Mousawi, a leader with the powerful al-Nujaba militia that falls under the forces' umbrella.

But, al-Mousawi added, such a move would require the approval of the Iraqi government.

On the Syrian side of the border, U.S.-backed Syrian Democratic Forces, Islamic State militants and Syrian rebels are fighting for territory. President Bashar Assad's forces and their allies have also been on the offensive, moving toward the Iraqi and Jordanian border but still far from reaching it.

On May 18, a U.S. airstrike hit pro-Syrian government forces that the U.S.-led coalition said posed a threat to American troops and allied rebels operating near the border with Jordan. The attack was the first such close confrontation between American troops and fighters backing Assad.

Syrian activists said leaflets were dropped Sunday on advancing Syrian soldiers and their allies, warning them to stay away from the border crossing of Tanf.

"Any movements toward Tanf will be considered hostile and we will defend our forces," the coalition leaflet read.

Mosul, Iraq's second-largest city, fell to the Islamic State in the summer of 2014 as the militants swept over much of the country's north and central areas. Weeks later, the head of the Sunni extremist group, Abu Bakr al-Baghdadi, announced the formation of a self-styled caliphate in Iraq and Syria from the pulpit of a Mosul mosque.

Information for this article was contributed by Bassem Mroue of The Associated Press.