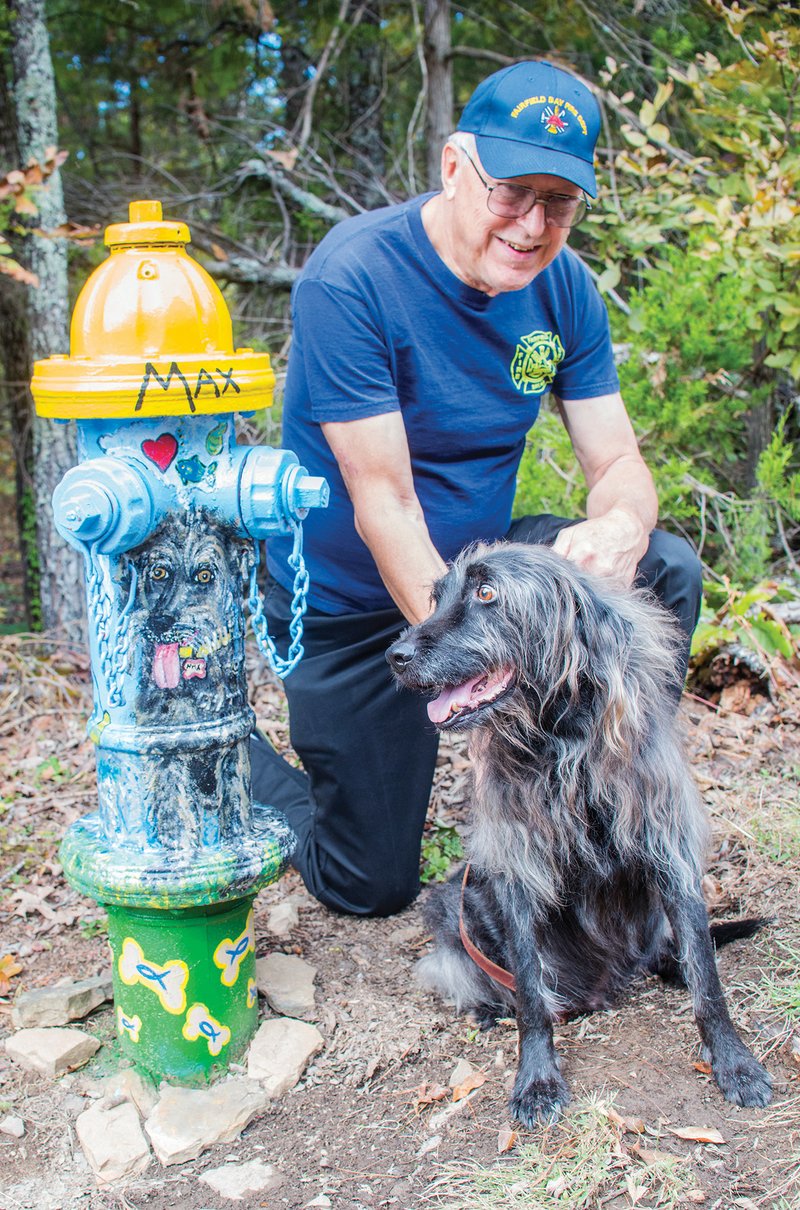 Steve Sutay adopted a fire hydrant from the Fairfield Bay Hydrants for a Cause project and had the hydrant painted in honor of his Irish wolfhound, Max. Steve and his wife, Shirley, moved to Fairfield Bay 23 years ago from New York, where he was a firefighter; he also served as a firefighter in Fairfield Bay. Max is a rescue dog and likes to go fishing with Sutay. ( William Harvey)

Thanks to the efforts of two dedicated volunteers, fire hydrants in Fairfield Bay are taking on a new look.

Some feature painted images of dogs; some feature cats. Still others show a giraffe, fire ants, mice, a sailboat or a birdhouse.

When Duggan moved to Fairfield Bay a few years ago from the Dallas area, she had retired and knew she wanted to become involved in the community.

“I am an animal lover and knew I would like to help the animal shelter in some way. I knew I couldn’t go volunteer there because I would want to bring all the animals home with me,” she said.

“I had been looking online about how to paint a propane tank, and it dawned on me that fire hydrants could be painted in the same way,” she said, smiling. “I met with the mayor and the fire chief and pitched my idea,” she said. “They both thought it was great.

“I am not artist. I can draw a little, but I cannot paint. I found Pamma, who is really an experienced artist. She and I have become best friends through this project.”

Henderson has lived in the Fairfield Bay area for approximately 10 years. She grew up in Gum Log in Pope County, taught art in public and private schools in western Arkansas, and is a member of the North Central Arkansas Foundation for the Arts and Education. She readily agreed to join Duggan in the project.

Duggan said residents of Fairfield Bay may contact her and Henderson through Facebook or in person to make arrangements to adopt a fire hydrant. The cost is $100 for a two-year adoption, if customized. “Customized” means the resident requests that a certain animal or animals, or a scene, be painted on the fire hydrant. Noncustomized fire hydrants may be adopted for $50 for two years, with a design of the artists’ choosing. Residents who adopt a hydrant have first rights to renew the adoption after two years.

Duggan and Henderson have painted 51 fire hydrants since April 2016.

“We have a waiting list of 30 or 40 more,” Duggan said. She said there are approximately 240 fire hydrants in the community.

Henderson said they use enamel to paint the fire hydrants, which have to be sanded before they can be painted. She said they have to follow several guidelines from the fire department, too, before they paint the hydrants.

Fairfield Bay Mayor Paul Wellenberger said that when Duggan first approached him about the project, the city had just experienced some issues concerning animals that might have cast an “unfavorable” light on the community with its residents and visitors.

“I thought painting the fire hydrants would help give us just the right image,” Wellenberger said. “While we basically are a retirement community, we are trying to attract younger residents, too. This project has helped with that effort.

“About that time, too, I received a call from the animal shelter telling me it was going to close because it had no money to remain open. I was able to get a franchise fee to help with that. So this fire-hydrant project has been a great fundraiser for the Animal Protection League.”

Linda Ritchie of the Animal Protection League said she is “totally enthralled and excited” about the Fairfield Bay Hydrants for a Cause project.

“It has been quite successful,” Ritchie said. “They have quite a waiting list. Everybody loves the idea.

“The Fairfield Bay Animal Protection League ran out of money last year. We went to the mayor, and he was able to get a tax passed in the community to run the shelter. Now the Animal Protection League is a fundraising arm of the shelter. We accepted an obligation of $15,000 a year, so we have to have fundraisers. This project is one way we raise funds.”

Duggan said there has been an “overwhelmingly positive response” from the community and visitors.

“We have met so many people who stop to share stories while we are painting. We do have a waiting list for hydrants but are painting as fast as we can,” she said.

“What started as painting animals on hydrants quickly turned into a lot more as we heard the heartwarming stories of the animals memorialized. As Pamma calls it, ‘It’s the icing on the cake’ when the stories come to life on the hydrants,” Duggan said.

“It has actually become more of a community outreach. We’ve heard of other communities that are interested in starting similar programs. … So it’s a win-win situation for all involved,” she said.

“What’s in it for us?,” Duggan asked. “Helping to raise funds for the Animal Protection League for the animals that can’t help themselves. This program could not have grown to the extent that it has without each other, the support from our spouses and the joint efforts of the city, fire department and water department.

“We have also memorialized loved ones on the hydrants. Never would I have imagined it would take that direction, but we are so pleased that it has.”

Henderson added: “This volunteer mission is to help animals in need.”

More information is also available on Facebook — Fairfield Bay Hydrants for a Cause.