Scouting is the first step to successful deer hunting 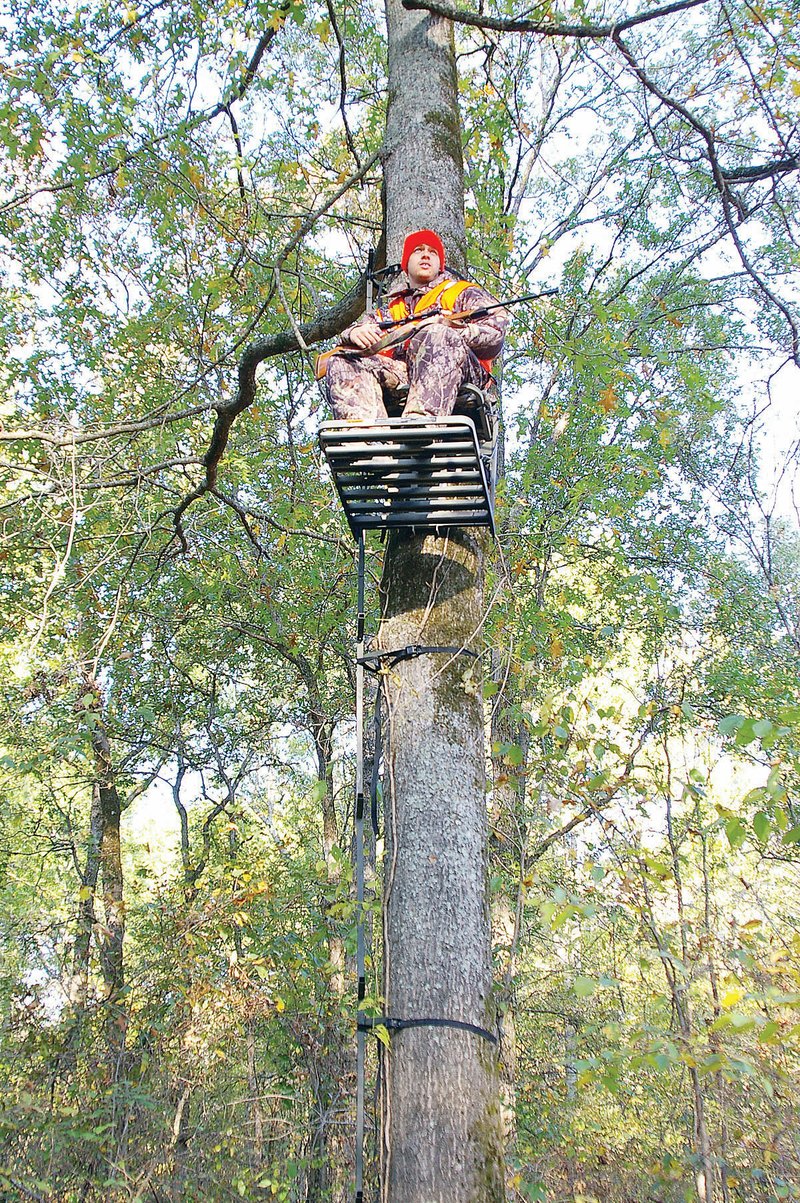 Pre-hunt scouting can help the whitetail enthusiast select the best stand location, the way Matt Sutton of Alexander chose this stand. Without scouting, everything is left to chance, and one might never get a shot.

When I was a youngster growing up in Cherry Valley, several elder statesmen often took me deer hunting in the St. Francis River bottoms. There weren’t many deer in Cross County back then, so it was very important to spend time scouting before hunting season in order to determine the best places to put our hunting stands.

Fortunately for me, my uncles, cousins and neighbors were patient teachers. I didn’t have a father at home to teach me woodsmanship and hunting skills, but I learned all that was necessary to find the best hunting sites while on frequent trips afield with these knowledgeable outdoorsmen.

“This is an old scrape,” one might say, showing me a depression pawed in the earth. “You can tell a buck hasn’t visited it in a while because it’s dry and full of leaves.”

Then moving farther through the woods, he would point out another scrape distinctly different from the first. “A buck probably visited this one last night,” he would say. “He’s cleaned the leaves out with his hooves and peed in the middle of it to mark his territory. If we find another one nearby, we know this will be a good place to put a nearby stand so we can get a shot at him when he comes back to freshen it up again. He’ll make his rounds pretty regularly, and if you’re ready next time he comes, maybe you can tag a nice buck.”

In this way, even though I hadn’t yet reached my teenage years, I learned that one can improve his luck on white-tailed deer by learning the major types of deer sign, what they look like, where to find them, how to interpret them and what they mean in terms of formulating a hunting strategy.

My good friend Gerald Almy, a Virginia outdoor writer and well-known hunting authority, has spent a lifetime hunting deer and learning to interpret deer sign when seeking a prime hunting spot. He recently shared with me some tips that can help you be a better whitetail scout, too.

“The first step is buying a compact notebook and pen, and a detailed topographic map of your hunting area,” Almy said. “Use these to mark important sign, as well as deer sightings, movement-pattern observations and other things helpful in formulating a hunting strategy.”

The most important notations, Almy said, are those about sign. The major types for which to watch are droppings, tracks, trails, feed areas, beds, rubs and scrapes.

“The amount of droppings you see indicate how many deer are using the area, and the freshness indicates whether deer are currently using that area,” Almy said.

Droppings also reveal something about the particular deer that left them. For example, extremely large clumps of deer droppings are a sign a large deer is in the area. And because mature deer often defecate as soon as they leave their beds, droppings near a thicket might reveal where that large deer lives and which direction he is traveling.

“A set of deer tracks also can be telling,” Almy noted. “If a track is dry and eroded, it was made a few days prior. If it’s fresh and well-defined, the track may be only hours old. If you find a very large hoof print, it was probably made by a mature buck. Does often travel in groups, so if you find a single set of tracks, it’s likely the marks are from a buck. When walking, a large buck has a longer distance between tracks than average deer.”

It’s not simple learning to interpret tracks in this manner. Experience, however, is a good teacher. The more you study deer tracks, the better you’ll be able to use them to help you when scouting for the best hunting zone.

The best trails often lead to thick bedding cover or dense escape areas. Finding where several trails merge into a heavier, single path increases the odds of seeing deer, but first use a trail camera or other device to determine if deer use is during the day or strictly at night.

“During some of my early fumblings as a deer hunter,” Almy said, “I wasted time watching what, in retrospect, were clearly nighttime travel corridors because they were such open areas and easily accessible.”

Watch, too, for feeding areas with fresh deer sign.

“This could be an abandoned apple orchard with tracks, droppings and partially chewed fruit, or a crop field with fresh tracks,” Almy said. “An area with oak trees that has leaves kicked up indicates deer were there recently, searching for acorns.”

Beds are where vegetation has been mashed down by sleeping deer. A large bed is usually made by a mature buck. Don’t spend much time here, Almy suggested, but back off and find a place where the buck can be intercepted moving to or from his resting area.

Rubs are among the most important types of sign when hunting bucks.

“These are where bucks rub their antlers against trees and scrape off the bark,” Almy said. “A series of rubs shows the path a buck follows, at least on some days. I’ve taken many bucks by setting up on fresh rub lines.”

Rubs provide more subtle clues useful to observant deer hunters as well. For example, mature bucks are usually much more aggressive than smaller bucks. If you find a rub tree ripped to shreds, odds are it was done by a mature buck. Rubs also can indicate the direction from which the buck approached because bucks usually rub the side of the tree from which they approach. After finding multiple rubs in a row, it is possible to determine the exact path traveled by the deer.

Scrapes are cleared oval areas on the ground where a buck pawed out the leaves and urinated over its tarsal glands to attract does in heat.

“The best are fresh and damp with little debris, and with a small tree branch overhead that a buck has bent or broken and left scent on,” Almy reported. “If you find one like that, putting a stand downwind is definitely worthwhile.”

The wise hunter also realizes that a mature buck doesn’t make just one scrape. Typically, he will paw out several spots along a corridor, with all the scrapes he actively checks running along a single trail. This trail is rarely a true trail immediately evident to human eyes. But if you examine the area closely, you should be able to determine how the buck enters and leaves the area of each scrape, which will, in turn, help you decide the best place to put a stand.

Now that you have information on what to look for while scouting, it’s time to get out there and do it.

“Don’t overlook the importance of studying the many clues left by deer,” Almy concluded. “Deer signs will show you the way to more successful hunting.”