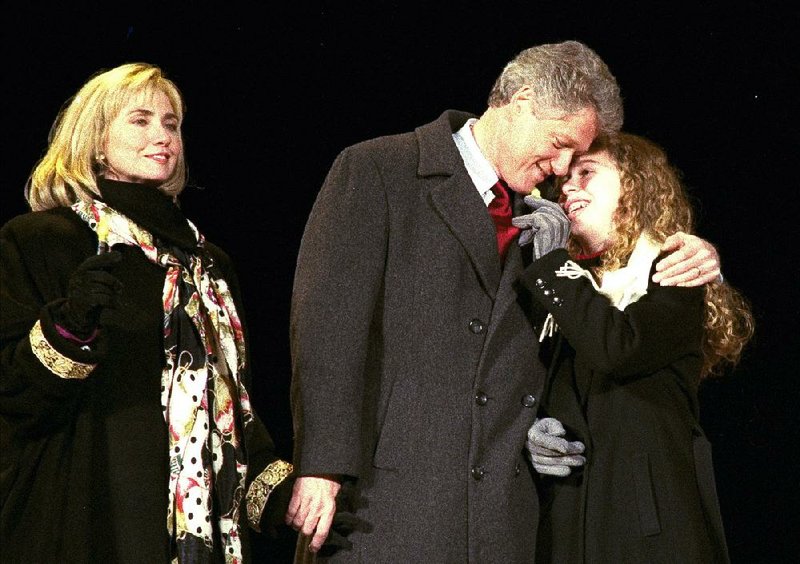 New President Bill Clinton celebrates with his wife, Hillary, and daughter, Chelsea, during festivities for his inauguration in Arlington, Va., in January 1993.

The largest crowd in the history of the Clinton School of Public Service will gather in Little Rock's Statehouse Convention Center later this month to hear from former President Bill Clinton and his wife, former Secretary of State Hillary Clinton.

"It's a sellout," Clinton School Dean Skip Rutherford said Tuesday, less than a week after the event was announced.

And the phone won't stop ringing.

Rutherford regrets it, but he's now the bearer of bad news: There's simply no more room.

It's a problem the school official had hoped to avoid.

"We presumed that a 3,200-seat hall would meet the demand, but clearly it has not," he said.

On three occasions, the audience topped 2,000. The biggest draw, until now, had been former astronaut Buzz Aldrin, who attracted 2,669 people in 2013.

On Nov. 18, when the Clintons and political strategist James Carville take the stage to reminisce, Aldrin's attendance record will be shattered.

"The best bet for people at this stage of the game would be to watch it live-stream," Rutherford said, encouraging people to view the event at https://clintonschool.uasys.edu/uacslive/.

The avalanche of requests has kept staff members occupied.

Sorting through the messages and weeding out the duplicate requests has been a logistical challenge.

Rutherford, a longtime friend of the Clintons, said he can think of several reasons why this event is shattering previous attendance records.

"It is the 25th anniversary of President Clinton's 1992 election so that is generating a lot of interest in its own right," he said.

Hundreds of people from around the country are traveling to Arkansas next week to mark the occasion, and they want to witness the address, he said.

There's also interest in the 2016 campaign. "Secretary Clinton has not been here since the election. I think that's certainly generating interest," he added.

Carville, that colorful Cajun, is also a major draw. When he and his wife, Republican pundit Mary Matalin, spoke at the Clinton School in 2009, 2,149 people were on hand for the show.

The chance to see the Clintons and Carville on the same stage is too good to pass up for a lot of political junkies, Rutherford suggested.

"Frankly, people want to hear [the Clintons] and they want to hear James Carville ask them questions. I think that's generating interest," he said.

Since its inception, the speaker series has been a bonanza for the Clinton School and the rest of Little Rock, Rutherford said, providing students with access to some of the biggest names in politics, business, science and the arts.

It's also a "major recruiting asset for prospective students," he said via email.

While the Clinton School tickets are gone, the Political Animals Club of central Arkansas still has seats available for its event marking the milestone.

The organization will hear at 11:30 a.m. Nov. 17 from David Wilhelm, Clinton's 1992 campaign manager who went on to serve as chairman of the Democratic National Committee.

Shane Broadway, the group's new president, said the group was looking for a speaker who had seen the campaign up close.

"I emailed him. He immediately said 'yes,'" Broadway said.

Wilhelm is flying in that morning to attend the weekend's campaign reunion.

Broadway is hoping for clear skies and a favorable forecast from the meteorologists.

"If weather's bad that day that we may have to find someone to fill in," Broadway said.

So far, more than 100 people have reserved $26 seats for the luncheon, which is held at the Next Level Events @ The Historic Union Station, 1400 W. Markham St. in Little Rock.

Fewer than 100 spots remain, Broadway added. People can get on the list by emailing politicalanimalsclub@gmail.com.

"We'd never had a president of the United States from Arkansas. We've only had one," Broadway said.