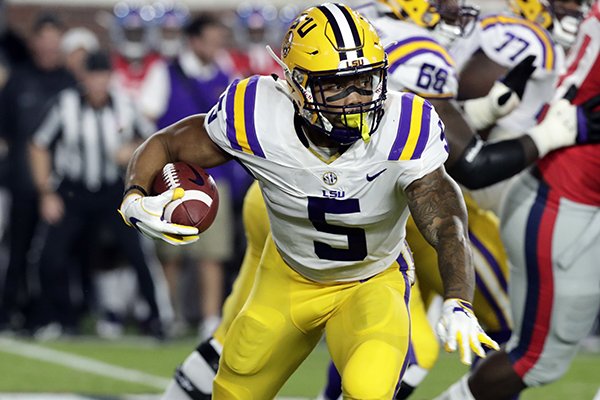 LSU running back Derrius Guice (5) runs for a first down past Mississippi defenders in the first half of an NCAA college football game in Oxford, Miss., Saturday, Oct. 21, 2017. (AP Photo/Rogelio V. Solis)

FAYETTEVILLE -- Throwing the deep ball has not been LSU's forte in recent seasons, with one decorated tailback after another rolling through Baton Rouge, a la Leonard Fournette and Derrius Guice.

But the Tigers are likely eyeing big-chunk passes Saturday against the Arkansas Razorbacks after recent developments for both SEC West rivals.

The Tigers (6-3 overall, 3-2 SEC) had receivers running free in the Alabama secondary on several occasions in last week's 24-10 loss at No. 2 Alabama.

In addition, the Razorbacks have fallen victim to an increasing volume of long throws in their last three games against Auburn, Ole Miss and Coastal Carolina.

LSU completed five passes of 13 yards or longer against Alabama, including receptions of 31 yards by Stephen Sullivan and 21 and 23 yards by DJ Chark. But at least two other long passes from quarterbacks Danny Etling and Myles Brennan were dropped, including one in the third quarter by Chark when he was running free on a route deep down the left hash.

"Probably could have caught the ball if he slowed down a little bit," LSU Coach Ed Orgeron said. "But it's hard to tell a receiver to slow down. The timing wasn't right. But that was on both of the guys."

"I don't think there's any doubt that they'll do it again this week," Rhoads said. "When they went to those throws, they had success.

Arkansas safety Santos Ramirez said a balanced LSU offense is a dangerous one.

"Our eyes are going to be everything in this game because they do a lot of motions and shifts and trades and everything. We've got to be prepared for that. We can't get caught up in all the run and then the next thing we know we've got a guy blowing past us. If we've got perfect eyes, we should be able to handle that."

Because Alabama's vaunted run defense has done a good job of limiting LSU in recent years, first-year offensive coordinator Matt Canada had a plan to go after the Tide's corners and safeties. LSU managed 151 yards on the ground, 75 more than the average against Alabama, but Canada's plan to throw deep was a key in loosening up the secondary.

"I think that [Canada] had a great play call on the first down, play-action passes," Orgeron said. "That was our game plan to go deep, but we had a chance to make those plays. If we make those plays, that's a different ballgame."

The Tigers' run game, held mostly in check by Arkansas during Razorbacks victories in 2014 and 2015, ran wild with 390 yards in last year's game.

Guice capped the scoring with a 96-yard touchdown run in the fourth quarter en route to his 252 rushing yards and 2 touchdowns. Fournette gained 98 yards on the ground and scored three rushing touchdowns.

"We have to be able to stop the north and south run piece of it," Rhoads said.

If Arkansas is able to slow the run Saturday, the line must get more pressure and the defensive backs must cover better than they have in recent games.

Three teams in a row have enjoyed success throwing deep on the Razorbacks.

Auburn's Jarrett Stidham completed seven passes of 13 yards or longer, with only one of those being a screen pass.

Ole Miss attacked the Hogs' defensive backs early and often. Jordan Ta'amu completed passes of 44 and 26 yards on back-to-back plays on the Rebels' second possession to set up Eric Swinney's 2-yard touchdown run for a 14-7 lead.

Ole Miss completed 15 passes of 10 or more yards, many of them deep posts, fades or other long routes, though Arkansas was able to overcome Ta'amu's 368 passing yards and did not allow a passing touchdown in its 38-37 victory in Oxford, Miss.

Even Coastal Carolina, which did not have the reputation as a strong downfield passing team, completed eight passes of 10 or more yards, including deep fades in man coverage and deep crossing routes against single safeties.

"It was a combination of technique, and I want to give Coastal Carolina a lot of credit for some of those plays," Rhoads said. "If you go back and look at the tape preceding that game, there weren't a lot of balls thrown and caught at that level, and they executed at a very high level on Saturday on a number of those throws."

Rhoads specifically pointed out Kilton Anderson's 22-yard fade route to Chris Jones against Henre Toliver on the first play of the second half.

"They're chicken fighting if you will, and the ball falls in there before [Toliver] has a chance to do what we call 'become offense' and look for the ball. Because of the timing ... he never even has that chance. The receiver doesn't either, and the ball just drops in perfectly and he's able to make the catch.

"Sometimes as a corner, you gotta have a short memory and realize some of those throws and catches are going to happen. We certainly don't like three of them happening on one drive, and about six of them happened over the course of the whole game."

If Etling and the Tigers strike deep a half-dozen times, the Razorbacks could face a long afternoon in Death Valley.

RANKINGS LSU is No. 25 in the USA Today coaches poll, No. 19 in first CFP rankings