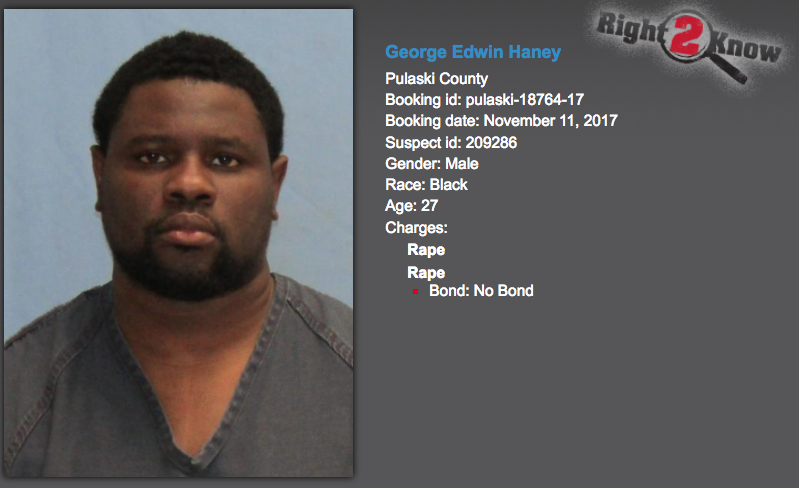 A Pulaski County Youth Services employee was arrested early Saturday morning, accused of raping a 14-year-old boy, according to a report from the North Little Rock Police Department.

George Edwin Haney, 27, the director of a county after-school program at Second Baptist Church on John Barrow Road in Little Rock, was being held in lieu of bond at the Pulaski County jail on two counts of rape.

Hyde said Haney is suspended from his position, effective immediately, and that a full investigation will be conducted by the county to ensure there are no victims in the after-school program.

The county will contact experts to determine how to talk to the children at the center to "quickly find out if there's been any other problems," Hyde said.

"I don't have the expertise to know exactly how that's approached," he said Saturday night.

"We'll visit with other staff members that worked in that program to see if they had any previous issues with him [Haney], and we'll bring in the appropriate adolescent or child counselors. We'll notify the parents immediately."

Every county employee is subjected to in-depth background checks before they are hired, including a senior- and child-abuse screening for those working with children. Hyde said the county will review its pre-employment screenings to determine whether there is anything that should be strengthened.

"We're not going to spare any expense protecting the children who are a part of our programs," Hyde said. "The safety of these children is paramount. When those children are in our care, it is job No. 1 that we ensure their safety."

About 11:28 p.m. Friday, a North Little Rock police officer observed a white Chevrolet Malibu that had backed into the parking lot of Pike View Elementary School at 441 McCain Blvd., according to the report.

The windows were fogged up. As the officer passed in front of the vehicle, he saw a man sitting in the back seat, the report said.

The officer shined his light on the vehicle, and a male minor raised his head up, according to the report. When the officer opened the driver's-side door, Haney was in the vehicle with his pants pulled down, and the 14-year-old boy was wearing only boxer shorts, the report said.

According to the police report, the victim said Haney sent him a message on a social-media app and later met him outside his house.

The victim told the officer that Haney forced him to have sex, the report said.

Haney told investigators that he believed the victim was 19 and that the sexual acts were consensual, according to the report.