State ranked 1st in count of kids of jailed parents 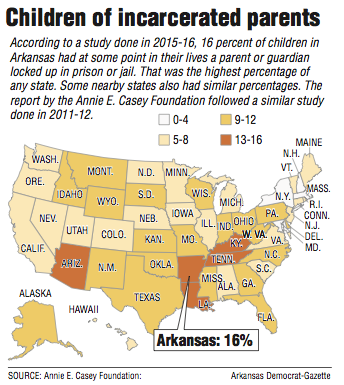 Arkansas surpasses all other states in the percentage of its children who have had a parent or guardian locked up, according to a new report by the Annie E. Casey Foundation.

The foundation reported that, according to its study, almost 16 percent of children in the state -- a total of 109,000 children -- in 2015-16 had at some point in their lives a parent or guardian incarcerated in prison or in jail. According to the U.S. Census Bureau, Arkansas' population of 3 million includes about 705,000 children under 18.

The Casey Foundation numbers come as an update to a more extensive report released by the foundation last year. In that report, which relied on data from 2011-12, 9 percent of the children in Arkansas dealt with parental incarceration.

In a news release Tuesday, the foundation reported that the number of children who had lost a parent or guardian at one point to incarceration had grown by 632,000 nationally in four years.

However, the release did not suggest a reason for the increase nationally or in Arkansas. A spokesman for the foundation said researchers were unavailable to discuss the report this week.

When asked about the report, lawmakers on the House Judiciary Committee pointed to the state's well-documented trouble keeping its prison population in check in recent years.

"It's probably symptomatic of the fact that we've had a rising prison population," said Rep. Matthew Shepherd, R-El Dorado, the chairman of the House Judiciary Committee.

Lawmakers enacted sentence reductions and changes to parole and probation programs in 2011 in an effort to curb prison growth. The number of prisoners fell, but then in 2013, a serial parole absconder killed a teenager in Little Rock. In a backlash, more parole violators were sent to prison, where populations shot up. This year, about 18,000 offenders are housed in prisons or county jails under the jurisdiction of the Department of Correction.

The latest statistics from the Casey Foundation found that children in the South and Southwest were among the most likely to have had an incarcerated parent. Three of the four states following Arkansas with the highest percentages of parental incarceration are Kentucky, Louisiana and Tennessee.

Last year's report included several policy recommendations such as parenting classes for prisoners, considering parental status in sentencing and requiring that courts notify social services when a parent is incarcerated.

"Incarceration is a destabilizer, pushing families teetering on the edge into financial disaster. Losing a parent who is the breadwinner, often for a prolonged period, leaves families scrambling to cover basic needs along with legal and other court fees," the report said. "When no parent remains to care for a child, extended family members step in -- often without proper support."

In an email, Mischa Martin, the director of the state Children and Family Services Division, said Tuesday that courts in Arkansas are not required to notify the division of all cases in which a parent is incarcerated. Mandated reporters can notify the state's abuse and neglect hotline if there are no appropriate friends or relatives to take care of a child whose parent has been locked up, Martin said. Mandated reporters include school personnel, medical professionals and court and law enforcement officials.

The Arkansas Department of Correction already offers parenting classes for inmates. In the past year, 1,960 prisoners completed the course, according to online prison records. There were 813 people on the waiting list for the classes in October.

A spokesman and attorney for the Department of Correction, Jim DePriest, declined to comment directly on the foundation's report but said in an email that the prison system works to promote "familial contact." Specifically, he pointed to the recent rollout of video visitation and a new law allowing children in foster care to visit with an incarcerated parent.

Neither Shepherd nor the vice chairman of the House Judiciary Committee, Rep. Clarke Tucker, D-Little Rock, had seen the report Tuesday. But both said the numbers didn't come as a surprise, and they pointed to more recent efforts by the Legislature to divert people from prison.

During this year's regular legislative session, both lawmakers helped lead an effort to pass Act 423, which led to plans to open four mental health centers across the state that are intended as alternatives to jails for people in a mental health crisis.

Tucker said children whose parents go to prison are more likely to commit crimes themselves.

"If we can do something to break that cycle with a parent that has not committed a violent crime, you're helping that family now and in the long run," Tucker said.

According to the report, 6 million children in America had seen their parent incarcerated at one point in their lives.

In the survey, children were asked: "Did the child ever live with a parent or guardian who served time in jail or prison after the child was born?"

The state-level data came from the National Survey of Children's Health, which has a national database of more than 102,000 children and about 2,000 per state. Households were randomly sampled.

The Annie E. Casey Foundation is a Baltimore-based nonprofit that focuses on child welfare.