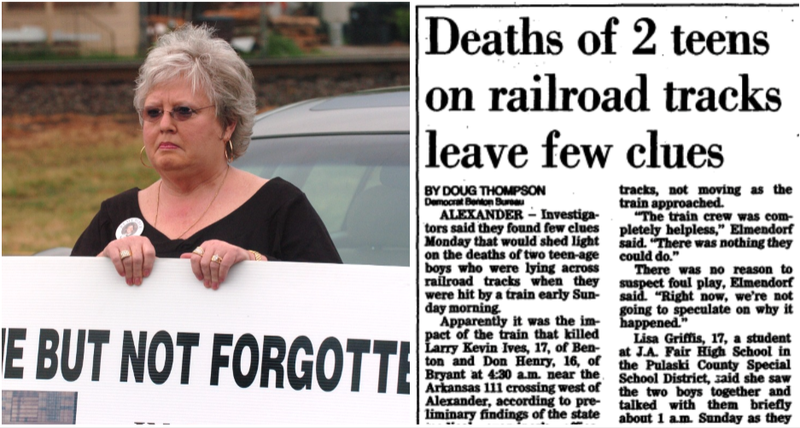 A mother's 30-year quest to uncover secrets she hopes will shed light on her son's mysterious death in 1987 has led a federal judge to order a private review of several tightly guarded government documents.

The documents may or may not reveal anything new about the death of Linda Ives' 17-year-old son, Kevin, whose body was discovered before dawn on Aug. 23, 1987, alongside that of his friend, Don Henry, 16, on a dark stretch of Saline County railroad tracks. But the Benton woman says it's time to find out.

Though the state medical examiner initially determined that the boys were struck by a train as they lay in a marijuana-induced deep sleep, another pathologist said he believed they were killed before their bodies were placed on the tracks -- though no one has ever conclusively said how.

A number of wide-ranging theories, many revolving around reports of drug smuggling in the 1980s out of the Mena airport in Polk County, and some suggesting a government cover-up, have since taken root and developed lives of their own. They have been the subject of documentaries, movies and books.

The enduring mystery surrounding the boys' deaths led the Benton woman to file a lawsuit last year seeking to force eight federal agencies and three Arkansas-based law enforcement agencies to produce any and all documents amassed over the past 30 years that may provide some answers. The lawsuit accuses the agencies of violating the federal Freedom of Information Act by failing to turn over complete documents in response to requests Ives and her Little Rock attorney, R. David Lewis, filed in 2012.

The requests sought all information the agencies may have in their archives pertaining to Kevin Ives or Barry Seal, a pilot who in 1985 testified that he smuggled tons of cocaine from Colombia to drop zones in the Louisiana swamps, and was assassinated in 1986 in his hometown of Baton Rouge.

Rumor has it that Seal, who flew regularly in and out of the Mena airport, was initially hired by the CIA to fly low over Central American countries taking photographs of rebels, and then began smuggling drugs back into the United States for extra cash.

Talk of low-flying planes in the area where the boys were run over by the train led to suspicions that their deaths might have had something to do with drug drops -- and that perhaps they were killed, and then laid out on the tracks to cover up any evidence of murder, because they witnessed or tried to intercept a drop.

Ironically, the in-camera review, which is conducted by a judge in private, coincides with the recent release of a movie, American Made, that is based on the saga surrounding Seal.

Miller dismissed most of the agencies from the lawsuit in a July 25 summary judgment order. But on Nov. 15, he ordered the three remaining defendants -- the Executive Office of U.S. Attorneys, the Drug Enforcement Administration and the Department of Homeland Security -- to turn over to him, by Dec. 1, all the unredacted documents they say are exempt from disclosure under the Freedom of Information Act.

According to the government's written objections to the records requests, the documents may include the minutes or transcripts of grand jury proceedings dating back to the early 1990s; investigators' private notes to one another; the names of confidential witnesses; secret investigative techniques and theories; and possibly more recent information that has surfaced in an ongoing investigation.

Lewis said he doesn't trust the government to supply all the information that Miller wants to review privately.

First Assistant U.S. Attorney Patrick Harris, whose office in the Eastern District of Arkansas is representing the federal defendants, said Wednesday that attorneys in his office are gathering all the documents in an attempt to comply with the order by the deadline, and that there is no plan to contest it.

The agencies Miller dismissed from the suit were the CIA, the Defense Intelligence Agency, the Department of Justice's Criminal Division, the State Department, the FBI, the Arkansas State Police, the Saline County sheriff's office and the Bryant Police Department.

Ives and Lewis said any documents they have obtained over the years from the various agencies in response to the Freedom of Information requests have been so heavily redacted as to be indecipherable and basically useless. They contend that after 30 years, the release of the information isn't likely to put anyone in danger or upset any current investigations.

He said he and Ives just want information that may explain how and why Kevin Ives died.

"Plaintiff is trying by this action to learn how her son was killed, by whom, and how and why, how and by whom his cause of death was covered up," the lawsuit states, complaining that the named agencies have provided "inadequate responses by virtue of no response or highly redacted responses."

According to news articles shortly after the boys' deaths, the engineer of the train that couldn't stop in time to avoid running over the boys at 4:25 a.m. Aug. 3, 1987, later said the train's spotlight had illuminated them shortly before they were struck. He said they were lying on their backs, motionless and in a somewhat unnatural position, and covered by a tarp from the waist down. A rifle and a flashlight lay beside them.

The boys' friends and acquaintances from Bryant High School later told authorities they had seen the two friends together earlier that night, Kevin Ives with a bottle of whiskey, and that Ives and Henry said they planned to go "headlighting" for deer later.

Crew members of an earlier train that had passed over the same stretch of tracks at 1:30 a.m. reported seeing no one on or near the tracks.

"There are lots of accounts of the cause of death of Kevin Ives from lots of books and other sources," Lewis wrote in the lawsuit, "but the accounts support several inconsistent theories of who did what, which will be difficult to reconcile without the investigative reports from the defendants."

According to an Oct. 4 memorandum written by Assistant U.S. Attorney Stacey McCord in Little Rock, both the Executive Office of U.S. Attorneys and the DEA have provided a "Vaughn index" to the court to explain their reasons for exempting some documents matching the request. The memo says an index "must adequately describe each withheld document or deletion from a released document, must state the exemption claimed for each, and explain why the exemption is relevant."

McCord said a Freedom of Information request received by the Executive Office in 2013 had been referred from the FBI, which had received the request from Lewis in 2012. The request sought all records, recordings, documents and emails, unredacted, relevant to the death of Kevin Ives and regarding Mena Airport drug trafficking as related to Seal.

In response, the FBI referred 13 pages to the Executive Office, which on Sept. 20, 2013, sent Lewis a letter saying it was withholding the 13 pages "in full," pursuant to laws prohibiting the disclosure of grand-jury material. It said Lewis appealed to the Office of Information Policy, which on Feb. 25, 2014, affirmed the exemption.

The second document is a letter from the U.S. attorney in Louisiana to the Administrative Office of the Courts and an attachment, which McCord said discusses the scope and direction of a grand jury investigation, and constitutes attorney work product, making it exempt.

She said the two documents comprising the 13 pages also were withheld "to protect the identities of third-party individuals named in the documents, such as potential witnesses and law enforcement personnel," and because the release of the information "could subject the persons to unwarranted invasion of their personal privacy and subject them to harassment, harm, or exposure to unwarranted or derogatory publicity and inferences."

She said the Executive Office "determined that there was no countervailing public interest" that would outweigh the privacy rights.

McCord said other documents withheld include DEA reports of investigation, which memorialize investigative and intelligence activities related to a law enforcement activity and are protected by the Privacy Act, and interoffice memos, which, by revealing the identity of a confidential source, "could reasonably be expected to endanger the health and safety of individuals whose names appear in the materials or those connected with them."

The memo says the requests to Homeland Security couldn't be answered because the agency was created Jan. 24, 2003, after Ives' death, and no records responsive to the request could be found.