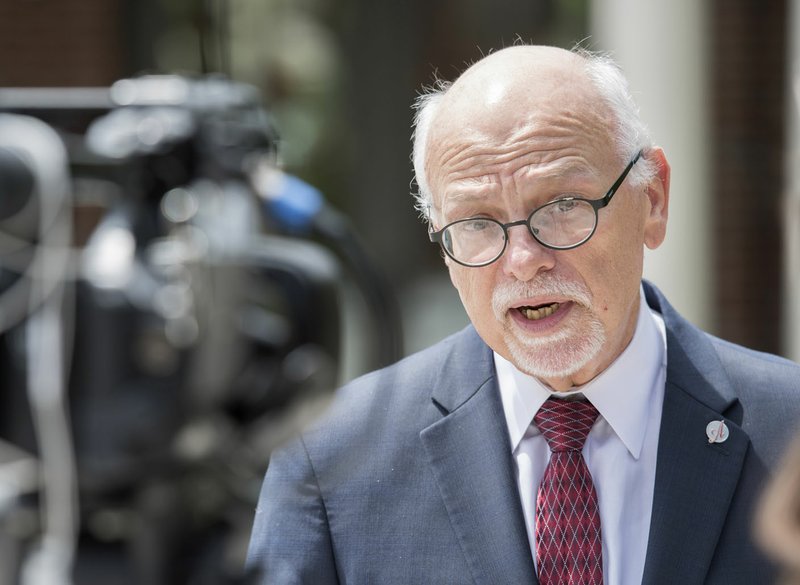 University of Arkansas chancellor Joseph Steinmetz is shown in this August file photo.

With Chancellor Joe Steinmetz's advisory committee meeting today, it appears the University of Arkansas, Fayetteville will have an athletic director by the end of the week and a head football coach early next week.

His advisory committee has the obligatory UA staff members -- people whose employment is determined by Steinmetz and probably enough votes to back whoever Steinmetz wants. He made it clear he would have the final say when he named an advisory committee. It seems he might still be a bit upset for being forced to fire Jeff Long.

The advisory committee also includes UA graduates who are not on the school payroll: Bill Montgomery, Rick Massey, Ben Hyneman and Stacy Lewis. Together, they are qualified to be more of a selection committee.

The main thing is everyone finally realizes the need for speed, and an athletic director needs to be named before a head coach can be hired.

Whoever is hired needs to immediately start looking at possible head coaches because the Razorback Nation is uneasy and has been for weeks. The fans want and deserve stability.

More than likely, the vetting of possible head coaches has begun.

Applications for the athletic director opening still should be coming in, but with the Dec. 20 early football signing period just around the corner, Steinmetz needs to get it right, and right now.

The UA board of trustees and UA System President Donald Bobbitt need to be monitoring this closely. It is a critical hire at a critical time.

This is not like hiring an art teacher or business professor.

This is the person who should have the final say in the hiring of the next football coach, and football is the cash cow, so it needs to be a person who knows how to win games, graduate players and influence friends.

This athletic director has to quickly identify the pirates, playboys and politicians, then separate them from the coaches who are willing to work as hard at recruiting as Nick Saban.

Someone who will call Alabama and find out the truth about why Lane Kiffin was fired and see the pattern. Kiffin was fired from three of his past five jobs, and he abandoned Tennessee after one year.

Or maybe Kiffin's name is just a smokescreen and there's no need to worry about him in the same sentence as the Razorbacks.

An athletic director who will find out if there is a reason Mike Gundy is still at Oklahoma State.

Arkansas is not a steppingstone job. It should be a destination job, but it has to be obvious to everyone now that a quality coach is not taking the job without knowing who he is working for and that the athletic director has what it takes to help the coach find success.

The athletic director needs to recognize trouble areas and work with the coach to fix them.

A football program is not just a head coach; it is a team with strong leadership starting at the top.

Jeff Long did a lot of things right as the athletic director, but he's gone and not coming back (sorry Steinmetz, just the truth).

The next coach needs to adopt the state and especially Northwest Arkansas. Bielema did that, and he knew the passion of the fans, but in the last few weeks he talked about needing to win.

It is highly doubtful Saban could win more than four or five games at Arkansas next year -- although all nonconference games are winnable -- but the coach who is hired needs to be ready to work 24-7 to build a stronger foundation.

The new athletic director has to work with that person to understand the Razorback Nation like Bielema did, but win more games.