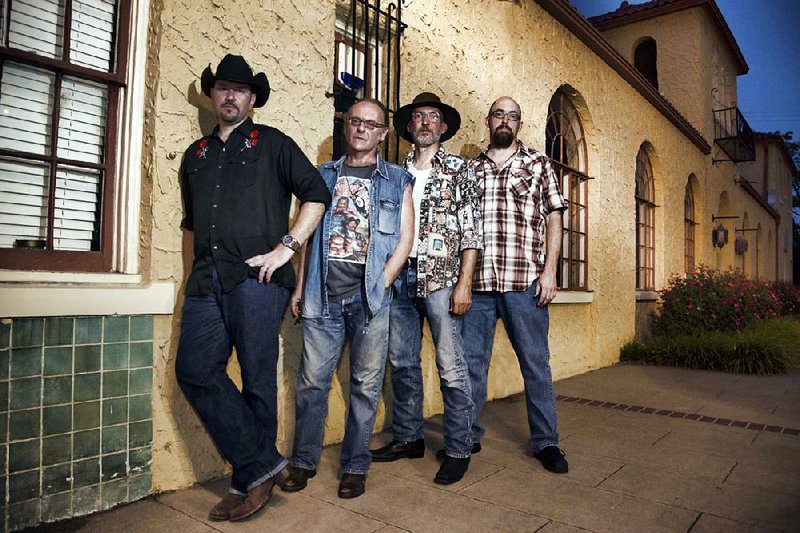 The Salty Dogs are (from left) Brad Williams, Nick Devlin, Brent LaBeau and Bart Angel. The new recording from the Little Rock neo-country outfit is Goodnight.

The first thing a listener hears on The Salty Dogs' excellent new six-song EP, Goodnight, is the strum of a crackling acoustic guitar, scrambling through a staticky, buckshot speaker.

The tune is "Goodnight '47," and if it sounds like a relic from the immediate post-World War II years, well, it is. Kind of.

The kickoff to the Little Rock-based, neo-country quartet's EP, out Oct. 20 on Max Recordings, was recorded earlier this year by lead singer, guitarist and songwriter Brad Williams at Jack White's Third Man Records in Nashville, Tenn., on a refurbished 1947 Voice-o-Graph machine that records up to two minutes of audio and then creates a 6-inch phonograph disc.

"Goodnight '47" was an afterthought, Williams says, a simple case of him stopping in Nashville and playing in the booth -- which is open during business hours for anyone to record on for $20.

"It's basically like a photo booth," Williams says, of the recording space. "You go in there, you're cramped up and you're singing to a built-in microphone. There's a red light, starting in five seconds and it counts down. You record it and it records it to vinyl."

Williams returned to Little Rock with the song, where it took production engineer John Crowley, a turntable and about an hour -- battling jumping and scratching from the record -- to convert the 59-second tune into a digital format.

A 2 1/2-minute version of the song titled "Goodnight" from the full band -- Williams along with Nick Devlin on guitar, Brent LaBeau on bass and backing vocals, and Bart Angel on drums and backing vocals -- closes Goodnight, which was recorded by Barry Poynter at Poynter Recordings in Little Rock. The EP follows Too Old to Fight from 2014, another EP. Before that, the band released Brand New Reason, a full album, in 2009.

The new EP ends after six songs in little more than 16 minutes, but it's a quarter hour that covers a lot of ground, from a country ballad with jazzy trumpet to supercharged hillbilly music channeled through the Bakersfield sound.

The lead-off track is followed by the band's take on The Louvin Brothers' "The Christian Life," with Devlin's spitfiring guitar weaving in and out of the snare cracks by Angel, LaBeau pumping out bass notes and Williams' warm baritone hanging lush and honeyed over the giddy-up rhythm.

Williams started writing the songs of Goodnight right after the release of Too Old to Fight. Although the title track, "Goodnight" -- with a lamenting fiddle from Tim Crouch and Williams singing "I'm left here with a head full of memories; something time won't soon erase" -- is more recent, it was written last year after the death of his grandmother.

Joining the band on the EP are Brian Whelan on backing vocals on "Nickels and Dimes," a country rock charger; Crouch going beyond fiddle to give "Goodnight" a taste of his splendid bass, mandolin and guitar playing; and piano from Stephen Winter and trumpet from Rodney Block on "Take 1," a tender and angelic ballad.

"Rodney and I have been friends over the years," Williams says. "We've played on some shows together. We just jelled. He's the hardest working man in show business around here."

Fourteen years on since forming in 2003, The Salty Dogs do their thing -- a blending of old-timey 1940s country, the Bakersfield Sound from the 1950s and outlaw country from the 1970s -- and do it well, as Goodnight shows. They're not getting rich (even though Salty Dogs songs have appeared in TV shows such as Rectify); they're just making music. 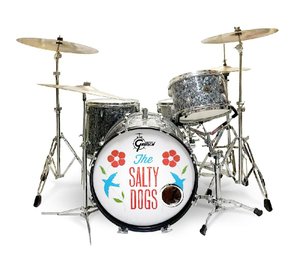 This is the cover of the EP Goodnight by The Salty Dogs.

"We like to hang out with each other," Williams says. "That's the biggest thing. Secondly, we go in knowing that it's not a money-making operation. Automatically, that takes a lot of pressure off. Thirdly, I think we consider it a serious hobby, but we don't take it to the extreme of other bands that it's all about trying to make it and all that."