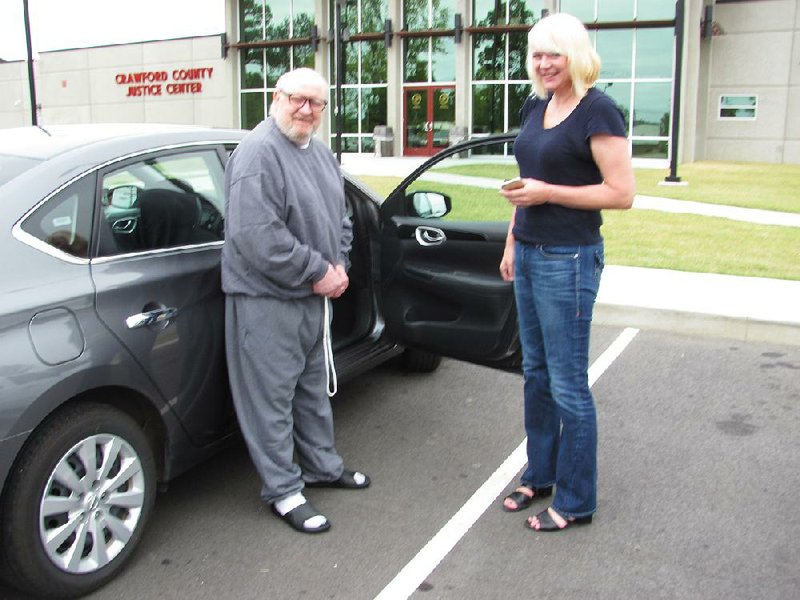 Rickey Dale Newman waits Wednesday with his court-appointed attorney, Julie Brain, for his brother outside the Crawford County jail in Van Buren after murder charges were dismissed against the former death-row inmate. “I’m a little nervous,” Newman said. “I mean, I’ve been locked up for 16 years, seven months and nine days. I have no idea what this world is all about.”

VAN BUREN -- After more than 16 years in custody, including as many as 12 on death row, Rickey Dale Newman walked out of the Crawford County jail Wednesday a free man.

Crawford County Circuit Judge Gary Cottrell signed an order approving a motion by special prosecutor Ron Fields to dismiss the first-degree murder charge against Newman in the Feb. 7, 2001, mutilation slaying of fellow transient Marie Cholette, 46, at a camp on the western edge of Van Buren.

Standing outside the county jail Wednesday afternoon wearing a dark gray sweatsuit and slippers and sporting a scruffy gray beard and glasses, Newman said it felt good to be free again.

"I'm a little nervous," he said. "I mean, I've been locked up for 16 years, seven months and nine days. I have no idea what this world is all about."

Asked what it was like on death row, Newman said it was something he had to "deal with" every day.

"You have no feelings," Newman said. "You're dead."

Newman was waiting with court-appointed attorney Julie Brain for his brother to arrive and said he was heading to the Veterans Affairs hospital. He suffers from chronic obstructive pulmonary disorder, and the sheriff's office has provided his medication since the summer of 2015.

Newman indicated he didn't know where he would go from there, but he said he was not going to remain in the area.

In a letter dated Tuesday to Cottrell explaining his reasons for requesting dismissal of the charge, Fields wrote that the Sept. 21 opinion by the Arkansas Supreme Court barred the state from introducing at Newman's retrial confessions he made to police after his arrest in 2001.

The state had presented Newman's confession to a jury during his one-day capital-murder trial June 10, 2002. Also during the trial, Newman, acting as his own attorney, told jurors he killed Cholette and wanted to be sentenced to death.

According to court records, Newman testified before the jury that he killed Cholette because she falsely represented herself as a member of a transient rail riding group he called the FTRA and had hurt one of its members during an altercation.

The jury convicted Newman and, on the basis of the jury's recommendation, Circuit Judge Floyd "Pete" Rogers sentenced him to death.

Newman was in the state prison system from June 11, 2002, to Feb. 14, 2014, according to the state Department of Correction, but it could not be determined whether he spent all that time on death row.

In January 2014, the Arkansas Supreme Court threw out his conviction and death sentence, ruling that Newman suffered from mental disease and defects. The court ordered Newman back to Crawford County, where he was to be rendered competent and retried.

It was that 2014 ruling that Cottrell relied on in January to bar Fields from using Newman's confession in his retrial. Fields appealed Cottrell's decision to the state Supreme Court, and it denied the appeal in the Sept. 21 opinion.

The mandate for the opinion was filed Wednesday, returning jurisdiction for the case back to Crawford County and opening the door for Fields to file the motion to dismiss the murder charge.

"The Supreme Court's opinion will prevent all these incriminating statements from being introduced into evidence at any new trial," Fields wrote in his letter to Cottrell. "Without this evidence, it is my belief that sufficient evidence does not exist at this time to retry the case."

Fields said in a telephone interview Wednesday that while he did not have enough evidence to retry Newman, he didn't think police investigators made a mistake in arresting Newman in 2001.

"I found no need to look for other suspects, as I believe they had found the correct one at the time," he said.

Fields wrote to Cottrell that he did not make the decision to dismiss the case lightly. "Lengthy and strenuous investigation" was undertaken by the Van Buren Police Department, the Arkansas State Police and the state Crime Laboratory, Fields wrote.

Fields said in his letter that in preparing for trial, he had asked the state police to search the Violent Criminal Apprehension Program, a large repository of major violent crime cases, to try to determine if other crimes of the type Newman was accused of had been committed around the country.

Court records showed that Cholette was killed Feb. 7, 2001. Her body was found in a tent at a transient camp known as the Benny Billy camp. Billy found her body Feb. 15, 2001. Cholette was wearing only a shirt and wrapped in several blankets.

According to the records, Cholette's sexual organs and anus had been severely mutilated and her nipples were cut off. Foreign material had been placed inside her pelvic area. Her jawbone was broken, and her dental plate was lodged in her throat. Her throat was cut, and there were several stab wounds in her chest.

Her sternum had been cut open and there was a large, gaping wound from her chest to her pelvic bone. Her pelvic bone had been cut through. There also was evidence of defensive wounds that indicated Cholette put up a struggle before she died, the records said.

"Based on my experience, it was clear that whoever perpetrated this crime would have committed other crimes of a similar nature if they were still at large in the public," Fields wrote. "The results of the search were that no other crimes matched the type of violence displayed in this case."

Fields wrote that he asked investigators to inventory the case evidence in the Police Department's evidence locker and to determine whether any other DNA testing was needed on any items. Several items were tested, he wrote, but results showed they "were not of evidentiary value at this time."

DNA testing on hair samples showed they did not connect Newman to Cholette as was presented to jurors in the original trial, Fields' letter said.

Fields noted that he found no indication police in the initial investigation made any mistakes or errors and that the investigation was conducted with "professional and competent performance."

Cholette's sister, Denise Cholette of Utica, Mich., said Wednesday that she was sad there was not enough evidence to try Newman, especially given that he was the last person to be seen with her sister.

Police had recovered video from a Fort Smith liquor store just across the Arkansas River from Van Buren that showed Newman and Cholette together on Feb. 7, 2001.

Denise Cholette said she didn't plan to tell Marie Cholette's two daughters, Angela Robinson and Danielle Soule, about the dismissal of Newman's charges because of the effect it would have on them.

"It was a difficult time in my life to lose my childhood playmate," Denise Cholette said of her sister's death.

She said she also believed that her sister's death caused the death of their mother. She said her mother, Ruth, grieved deeply after learning of Marie Cholette's death and died of a heart attack about a year later.

Even though they didn't have a body, Marie Cholette's family gathered in a Michigan church after her death for a service, Denise Cholette said. She said her sister's ashes were sent to her about a year after her death, and she keeps the urn in her basement.

The family never knew why Marie Cholette became a transient, Denise Cholette said. She once worked for Lockheed Missile and Space Co., in Bremerton, Wash., but lost it when violence in her marriage caused her to lose her security clearance.

The family lost track of her as she wandered the country with a succession of boyfriends, Denise Cholette said.

Records show she arrived in Van Buren in late January 2001 with another boyfriend, John Evans. They were arrested Jan. 23, 2001, for public intoxication. Cholette got out of jail the next day, but Evans remained locked up after hitting a jailer. Cholette stayed in Van Buren to wait for his release.

After his conviction, Newman sought to forgo his appeals and be executed. Murder convictions are automatically appealed to the state Supreme Court. After the court affirmed his conviction in September 2003, the justices determined Newman was mentally competent at his 2002 trial and granted his request to drop further appeals and dissolve his execution stay.

His execution was set for July 26, 2005, but four days before it was to be carried out, he allowed federal public defenders Bruce Eddy and Brain to file a request in federal court on his behalf to stay his execution.

In a hearing for that stay before U.S.District Judge Robert Dawson in November 2007, a neuropsychologist and a psychiatrist testified that Newman suffered from mental illnesses and cognitive deficits that made it impossible for him to rationally waive his appeals.

Court records show a psychological report on Newman that included a lengthy description of his early life.

From interviews with Newman's family, the report said, Newman had been physically and psychologically abused as a child. Newman and several of his siblings were beaten seriously and often by a man who lived with their mother.

A sister of Newman recalled the man would hold the children, including Newman, upside down with one hand and beat them with the other.

Newman also was tied up outside for hours. He and other siblings were left for long periods without food, and the man sometimes would taunt them with food but not give them any.

His mother, Ruby Inez Ross, regarded her children as a nuisance, the report said, and was quick to anger and lashed out physically at them. She died of cancer in 1969, with Newman and his siblings listening to her screams of pain that morphine could not ease, the report said.

Mentally impaired, Newman could not grasp his lessons in school. At 16 he began to run away, ride around the country in train box cars, do simple manual labor, panhandle, search dumpsters and get charitable and government assistance.

He joined the Marines for one year and received an honorable discharge.

In the effort to restore Newman to competence after his conviction and death sentence were reversed, Cottrell ordered Newman to be sent to the State Hospital for treatment and evaluation.

After three stays at the State Hospital over nearly two years, during which Newman refused to cooperate at his attorney's instruction, Cottrell declared Newman fit to proceed in November 2015 to be retried.

Progress on the case was further slowed when it took more than a year to reach a resolution of Newman's motion to bar his confession from trial.