Conway Housing Authority director believes in ‘a hand up’ 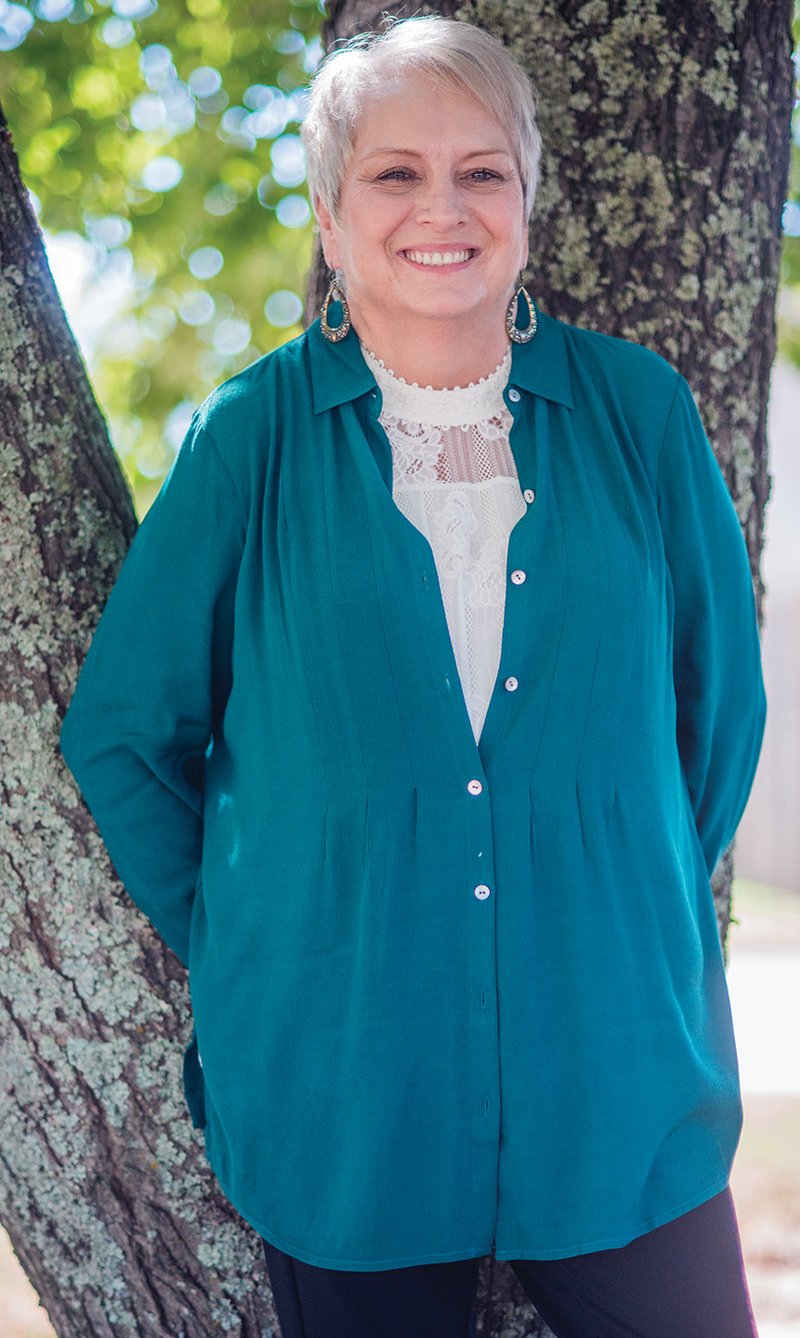 Mary Boyd of Conway was voted most passionate about her job by the 1997 Faulkner County Leadership Institute Class. Twenty years later, she said she feels just as strongly about the Conway Housing Authority.

“The waiting list is over two years for public housing,” Boyd said. “I always tell people, ‘Call your congressman.’ I’m the only voice saying, ‘You’ve got to help us.’ I can see people are slipping through the cracks because of it; they live in their car or in tents.”

Boyd is executive director of the housing authority, where she’s worked for 32 years. She grew up in Two Rivers, Wisconsin, with five older brothers in a Catholic family. She is a self-

proclaimed “huge” Green Bay Packers fan. A graduate of the University of Wisconsin at Green Bay, she has a degree in business and a minor in human development.

“[My degree] turned out to be perfect for the transition of HUD (U.S. Housing and Urban

Development) moving away from warehousing — here’s a house; make the best of it,” she said.

Boyd came to Arkansas in 1981 for her then-husband’s job in Morrilton. She became the assistant to the part-time Morrilton mayor, and part of Boyd’s responsibility was to oversee

Section 8 housing, which is rental-housing assistance through private landlords. The preferred term now is housing vouchers.

A HUD employee inspected the units; they all passed with flying colors, Boyd said. She said the man was impressed, and he told her about an opening at the Conway Housing Authority. She was hired as assistant executive director and, four years later, became director.

She oversees housing vouchers, two high-rises for the disabled and elderly, tax-credit properties and 154 public-housing units.

The 74 family public-housing units caused a fight in the city that went to the Arkansas Supreme Court in the 1960s, she said.

“The mayor and City Council fought us all the way to the [Arkansas] Supreme Court [as we worked] to get the 74 family units; they didn’t want any public housing, ‘not in my backyard,’” she said.

The Arkansas Supreme Court stated that the city had to allow the units under the Fair Housing Act. Public housing ceased being built in the 1980s, she said, but more housing is needed in Faulkner County.

She said single mothers occupy about 90 percent of the family units.

“Being a single mom most of my life, that’s always been my cause; they need a hand up,” she said.

“When you say Conway Housing Authority, you hear a change in somebody’s voice. Come on, come see our place before you denigrate it,” she said.

In the last inspection, on a scale of 1 to 100, the Conway Housing Authority got a score of 97, she said. “That’s unbelievable for 40-year-old units,” she said.

The Conway Housing Authority received an award from U.S. Housing and Urban Development for instituting the first police substation in public housing in Arkansas.

Former Conway Police Chief Tim Dailey called her one day in the 1990s and said, “I toured your property last night. This is no projects. See that security lighting and security screens? People care out here.’ I was just crying,” she said.

Dailey told her about a grant to fund a police substation, and Conway got it. Boyd said Dailey named it POPE — Positive Oriented Police Enforcement. “We were the first in Arkansas, so we got an award and got to go to Washington,” she said.

Officer Sarah Smith of the Conway Police Department is assigned to the substation. Boyd said Smith works with housing-authority employee Sharon Everette, the resident coordinator, on programs for the children. Boyd said children receive backpacks and school supplies every summer. Tutoring is offered, as well as crafts, movies and field trips.

Boyd said that after she was hired as executive director, the streets in the neighborhood were renamed like other streets in the city. Previously, numbered addresses with the description “Conway Housing Authority” were used.

“It was such a difference for the folks out here. They’d say, ‘People assume I live in the projects when I write checks,’” Boyd said.

“Our public housing is in walking distance of [the University of Central Arkansas],” she said. “We’ve had several graduate from UCA; it’s a good place to succeed.”

Boyd said the Family Self-Sufficiency program has been really rewarding. Residents, who are housing-voucher

holders, agree to be off all government assistance within five years, and they set goals. As their income goes up, the rent goes up, and the money is put into an escrow account. At the end of five years, the individual gets the money in a lump sum.

Almost all 20 graduates have bought houses with that money, Boyd said.

She is also proud of the fact that the Conway Housing Authority has never had an audit finding — not one, she said — in her tenure.

A lot of paperwork comes with her job.

“I’m a manager at heart,” Boyd said. “I tend to enjoy interacting with the clients, so some days I have to shut my door to get all my reports done. If there’s a kid out there, I have to go visit. We try to focus on the family, as far as if they come in with a problem.”

For example, last week, Boyd wrote a note to a woman who is deaf and told her it was OK to pay her rent on a day other than it was due because of the timing of the woman’s Social Security check.

Boyd has a particular soft spot for the elderly residents.

A fire, caused by faulty

wiring in the walls, destroyed the East Oakwood Place apartments on Dec. 20, 2004.

The fire happened at noon, and Boyd said she was eating lunch with her daughter. The restaurant manager came to get her and said, “You have an emergency at the high-rise.” Although no one was injured, it was traumatic, she said. “I love my residents; they can tell you,” she said. “People were without their prescriptions; one lady was without her oxygen.”

Boyd said her daughter had to drive her around for two days because she was so upset. The residents were placed in apartments all over town, she said.

“The community made that happen and the staff; we just worked all around the clock. I could write a book about those two weeks,” she said. “I don’t remember Christmas at all that year; we were running between hotels.”

Residents lost most of their possessions, but she said firefighters worked around the clock to find people’s

The units were rebuilt, and they are next door to Oakwood Place, which was built in 1977.

The housing manager of those buildings, Terry McClendon of Springhill, retired in September.

“I worked there a little over nine years, and the thing that always impressed me about Mary, she was very proactive about making sure her employees got the training they needed,”

McClendon said. “I have worked at other places, and they did not or would not [spend the money for training],” she said.

“Also, the fact that my family always came first, and she knew that, and she didn’t have a problem with that, so she was very supportive.”

Boyd said employees work well together, and taking care of the residents is expected from everyone.

“We are in such a gray area, you wouldn’t believe; you’re working with people. I had a guy one time working with me before we had two-way [radios], and a woman was having a heart attack. I grabbed the maintenance guy and said, ‘Pat her hand and tell her we’re getting her help.’ He said, ‘Is this the catchline at the end of my

contract?’ If the elevator is out, we’re carrying groceries upstairs. We stay on call for an emergency 24 hours a day,” she said.

Sometimes residents don’t uphold their end of the bargain and can’t stay in the housing, she said. If a resident gets an eviction notice, the first step is to have a hearing.

Boyd said she’s known for asking residents who are struggling, “What’s your plan?”

“If your utilities got shut off, whatever, you tell me how you’re going to prevent this again,” Boyd said. “One day this gal came in, and her sister was being kicked out. The sister said, ‘I told you last night that Mrs. Mary was going to require you to have a plan. Did I not tell you that?’ I just grinned and said, ‘Yeah.’”

Boyd was one of the founders of the former Faulkner County Single Parent Scholarship Fund. Her daughter, a single mother of two, qualified for a scholarship in 2015 and 2016.

“Talk about what goes around comes around,” Boyd said, laughing.

She believes that the success of the housing authority — not that she hasn’t had help — comes from her tenacity and experience as a single parent, “understanding the struggles and what it entails. It’s made a connection.”

It also helps to have a lot of passion.