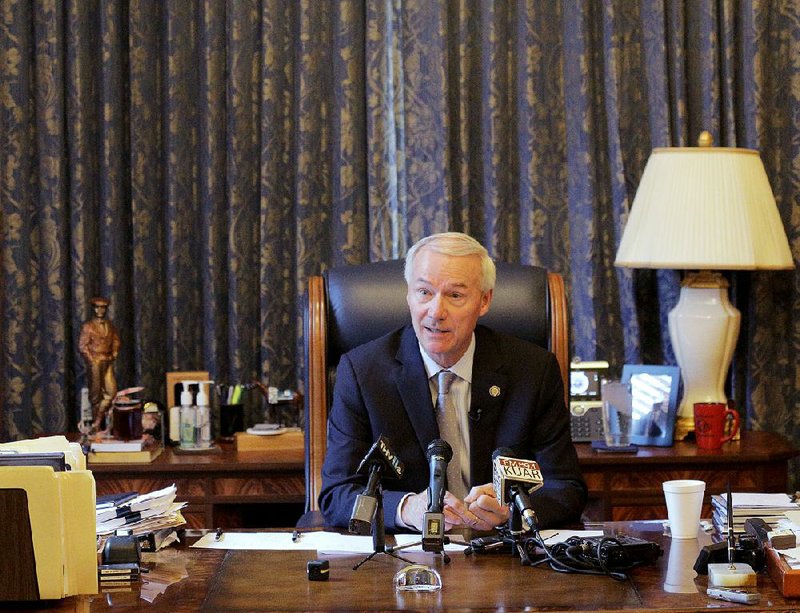 Gov. Asa Hutchinson talks with reporters during a news conference in his office Tuesday afternoon at the state Capitol in Little Rock.

Hutchinson told reporters that the increase in premium costs expected for plans purchased through Arkansas' hybrid expansion program will be offset by reducing a state version of the cost-sharing subsidies that Trump announced last week he was cutting off to insurers. Under Arkansas' hybrid expansion program, Medicaid funds are used to purchase private plans for low-income residents through the insurance marketplace. More than 300,000 people are on the program, which was created three years ago as an alternative to expanding Medicaid under the federal health law.

"Arkansas Works is not in jeopardy because of this latest decision," Hutchinson said, referring to the hybrid expansion. "We've looked at it over the weekend, we've looked at the legal analysis of it and the reduction of those cost sharing payments will not adversely imapct Arkansas Works."

Trump's administration said last week that it was ending the subsidies paid to insurers by the federal government to help lower consumers' deductibles and co-pays. That prompted the insurers offering plans on Arkansas' marketplace to seek approval for average rate increases ranging from 14.2 percent to nearly 25 percent.

Arkansas uses Medicaid funds to provide similar cost-sharing subsidies for plans purchased for the state's hybrid expansion, and those subsidies weren't affected by Trump's action last week. But Hutchinson said those subsidies will be reduced so the money can instead go toward any increases in premiums for the expansion plans.

The chairman of the state Democratic Party accused Hutchinson of glossing over the effect Trump's action will have on thousands in Arkansas.

"The additional costs to the state and to families will be devastating," state Rep. Michael John Gray said in a statement. "This is a self-inflicted wound that is a direct result of our president intentionally hurting residents of Arkansas."

Arkansas is still waiting for federal approval to several changes Hutchinson and lawmakers have proposed to the hybrid expansion, including moving 60,000 people off the program by lowering its maximum eligibility rate. The proposed changes would also impose a work requirement on others in the program. Hutchinson said he remained optimistic the changes would be approved.