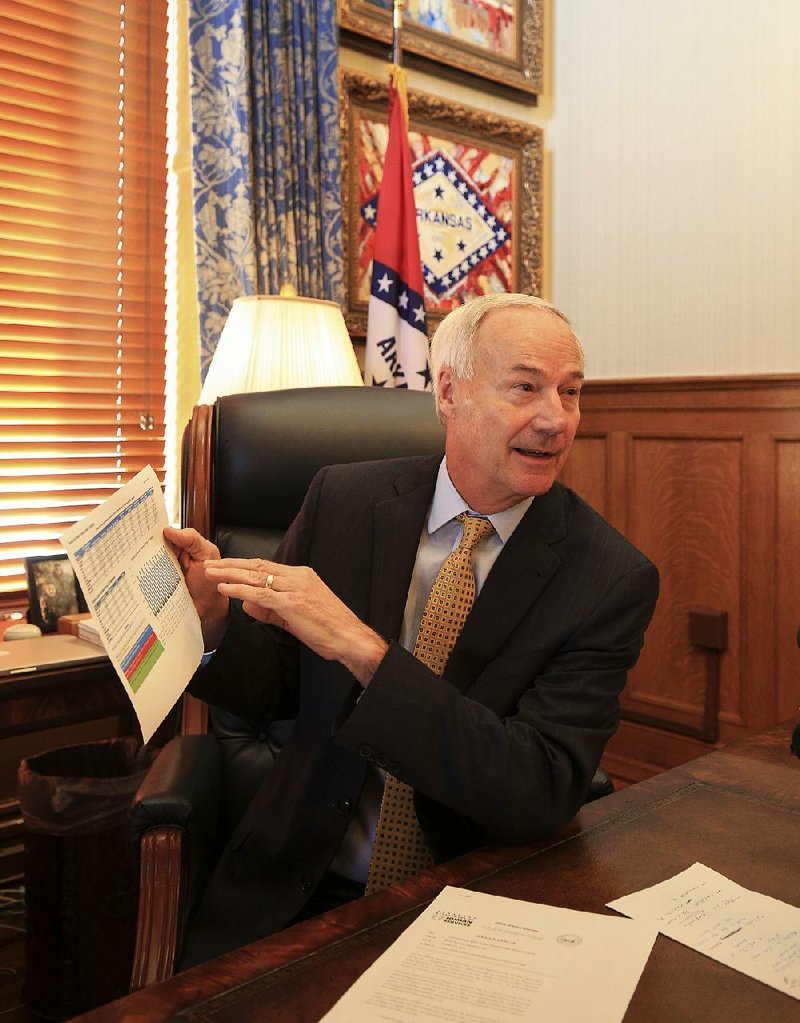 Gov. Asa Hutchinson talks Tuesday in his office about how President Donald Trump’s decision to end a subsidy for insurance companies will affect Arkansas Works.

Gov. Asa Hutchinson said Tuesday that President Donald Trump's decision to end a subsidy for insurance companies won't increase the cost of the state's expanded Medicaid program, known as Arkansas Works, but will hurt about 4,000 people who are in unsubsidized plans offered through the state's insurance exchange.

He said he shares Trump's goal of repealing the 2010 Patient Protection and Affordable Care Act but disagrees with his fellow Republican's tactics.

"His strategy appears to be just repeal it without a solution, and that's what I've never said is a good policy solution," Hutchinson said during a news conference at his office.

Referring to enrollment in Arkansas Works, he added: "Whenever you're dealing with 300,000 Arkansans, then we have to have a plan for the future. It can't just be disruption."

The subsidy that Trump ended last week is one of two types of assistance that have been provided under the Affordable Care Act to people who don't qualify for Medicaid and buy insurance through health insurance exchanges.

Tax credit subsidies lower the premiums for many consumers with incomes below 400 percent of the poverty level: $47,520 for an individual, for instance, or $97,000 for a family of four.

The cost-sharing payments reimburse insurers for increasing the amount of coverage provided through so-called silver-level plans to consumers with incomes below 250 percent of the poverty level.

Such plans are designed to cover 70 percent of a typical consumer's medical expenses. For lower-income consumers, however, the plans are modified so they cover up to 94 percent of the expenses. The cost-sharing subsidies reimburse insurers for providing that enhanced coverage.

Ruling in a lawsuit filed by Republicans from the U.S. House of Representatives, a federal judge found that funding for the Affordable Care Act's cost-sharing payments was never approved by Congress.

The judge had allowed the payments to continue while the case was on appeal, but Trump ended them Thursday after Attorney General Jeff Sessions issued an opinion agreeing with the judge's conclusion.

To compensate for the loss of those payments, Arkansas Insurance Commissioner Allen Kerr on Friday allowed insurers to increase their rates for their exchange plans by double-digit amounts starting in 2018.

Although Arkansas uses Medicaid funds to buy coverage in those plans for most of the people covered under Arkansas Works, the premium increases won't raise the amount the state pays for those plans, Hutchinson said.

That's because Arkansas will reduce the amount it pays for its own version of the cost-sharing reduction payments by the amount needed to offset the premium increases.

"My initial reaction is that this could undermine Arkansas Works," Hutchinson said. "But upon further study over the weekend, it doesn't."

The tax-credit subsidies are tied to the price of silver plan premiums, meaning the increased rates approved by Kerr will result in larger subsidies for many consumers with incomes below 400 percent of the poverty level.

Those larger subsidies will offset the increase in premiums for those consumers. But Hutchinson said premium increases will affect people who are enrolled in silver plans and don't qualify for tax credits or Medicaid.

"You've got an impact on 4,000 Arkansans that are having the rug pulled out from underneath them right now," Hutchinson said.

To protect such consumers, Hutchinson said, Congress should approve money to restore the cost-sharing payments.

"I'm very supportive of Congress addressing this," Hutchinson said. "This is another thing that's back in their lap."

First approved by then-Gov. Mike Beebe, a Democrat, and the Republican-controlled Legislature in 2013, the state's Medicaid expansion extended coverage to adults with incomes of up to 138 percent of the poverty level.

Arkansas is paying 5 percent of the program's cost through Dec. 31 and 6 percent starting in January, with the federal government paying the rest. The state's share will rise every year until it reaches 10 percent in 2020.

To reduce the cost to the state, Hutchinson has applied for federal approval to move about 60,000 Arkansans off the program by limiting eligibility to people with incomes of up to the poverty level, instead of 138 percent of the poverty level.

The state also would impose a work requirement on many of those remaining in the program. A Hutchinson spokesman said Monday that state officials are expecting news on federal officials' approval of the requested changes, through amendments to a state waiver, "any day now."

"There are some healthy discussions going on as to how the waivers fit in to what the president is trying to accomplish," Hutchinson said. "I've made my case. I'm optimistic that the waivers will be granted, but I'm also anxious for it to occur."

Analyzing the effect of ending the cost-sharing payments, the Congressional Budget Office found in a report issued in August that higher silver plan premiums, combined with the resulting increase in the size of the tax credit subsidies, would make bronze and gold plans more attractive to many consumers.

Consumers will have a chance to enroll in or change plans during the annual sign-up period that runs from Nov. 1-Dec. 15.

"Consumers should make sure during open enrollment to go out there and shop around to ensure that the impact of the president's decision hasn't affected the plan that they're in," said Craig Wilson, director of health care policy at the Arkansas Center for Health Improvement. "Perhaps they can move to a more cost-effective plan for their health care needs."