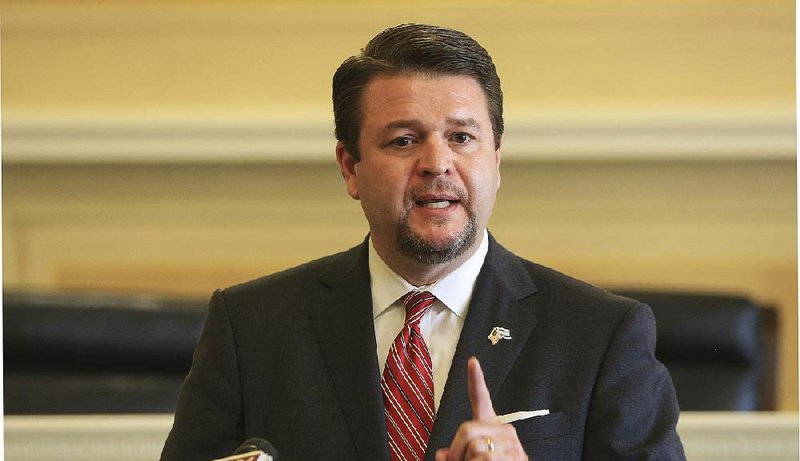 Work was completed this week on a Ten Commandments monument intended to replace the original monolith, which was destroyed within hours of it being erected at the Arkansas State Capitol earlier this year.

Sen. Jason Rapert, R-Bigelow, told Arkansas Online on Wednesday afternoon he received confirmation “about a day or two ago” that the latest iteration of the monument was finished.

“Obviously, we’re ready to go as soon as possible,” Rapert said of installing the new 6,000-pound, 6-foot-tall statue on state Capitol grounds. “My hope is for it to be up in a matter of weeks.”

Rapert said the last remaining step is for the Arkansas secretary of state’s office to sign off on the reinstallation.

The original monument was installed June 27 near the Arkansas Supreme Court building and toppled less than 24 hours later when 32-year-old Michael Reed of Van Buren barreled into the statue in the early morning hours of June 28, authorities said.

The monument shattered into three large pieces and countless smaller shards, and the act was captured on Facebook Live.

Reed, accused of also destroying a similar monolith in Oklahoma, was arrested by Capitol police a short time later.

He faces charges of defacing objects of public respect, trespassing on Capitol grounds and first-degree criminal mischief. As of Wednesday afternoon, he remained at the Pulaski County jail.

The Ten Commandments monument is being paid for using private funds.

In July, the executive producers of the God's Not Dead movie series donated $25,000 toward the effort. They are currently filming the series' third installment in the Little Rock area.

Rapert sponsored a 2015 law to erect the monument on the grounds. He called the destruction “an act of violence” and urged elected officials to take a stand against such acts.

The state senator said he hopes additional safeguards will be put into place to prevent damage to the latest iteration of the statue.

Rapert said those additional security measures could include steel-and-concrete posts similar to those surrounding the Little Rock Nine monument.

“Since we have seen someone cross that line, we want to be wise,” he said.