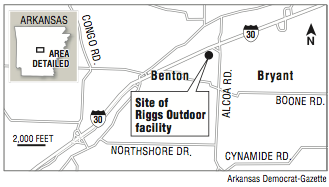 A map showing the site of Riggs Outdoor facility

Riggs CAT, which has been providing Caterpillar bulldozers and other heavy construction equipment to commercial operators in Arkansas for 90 years, is turning its attention to equipment lines it can market to homeowners, hobbyists and outdoor enthusiasts.

The first location for the new division, Riggs Outdoor, will open in Benton next summer. The $5 million facility also will house the 90-year-old company's tech division and will open with 30 employees and eventually employ 50.

Marketing to consumers is unfamiliar territory for both Caterpillar, the Illinois-based company known worldwide for its distinctive yellow dozers, heavy dump trucks, graders, excavators and other heavy equipment, and for Riggs, the company's only Arkansas licensed dealer.

"This is all brand new for us," said Megan Dunlap, a Riggs spokesman.

But both Caterpillar and Riggs have been preparing for some time to enter the competitive consumer market, counting, in part, on the "built to last" reputation enjoyed by the Caterpillar heavy construction equipment.

Caterpillar began with a line of portable generators, which the company markets to both the commercial and consumer market. The consumer generators are designed to handle weather-related power failures or recreation.

Earlier this month, the company announced it would produce, in partnership with Textron, a line of utility vehicles, small four-wheel drive off-road vehicles that can seat two to six people.

Riggs, meanwhile, began its foray into the consumer market earlier this year with the purchase of two motorcycle/all-terrain vehicle dealerships -- KB Outdoor Sports in Benton and Kawasaki Sports Center in Little Rock. Both of those operations will be consolidated in the new location, Dunlap said.

Riggs Outdoor will continue to sell both Yamaha and Kawasaki off-road and road motorcycles and both company's all-terrain vehicles and utility vehicles, according to Sean O'Keane, chief operating officer and executive vice president for Riggs CAT.

"The goal of the division is to focus on consumer products rather than commercial products," O'Keane said in an interview, adding that it expects to open several more similar stores in Arkansas in the coming years. "This will be our flagship store."

The company expects the facility to generate $20 million annually in sales.

"That's like adding a couple of new car dealerships," Mattingly said of the sales tax the store could generate for the city. "It will be a substantial retail presence."

The facility also will house Riggs CAT's technology division, SITECH, which markets the Caterpillar software and onboard control systems for the company's commercial products.

O'Keane said the location is ideal, particularly for market coverage south of Little Rock and in Saline County in particular, given its robust construction activity. The company has eight other locations in its commercial division employing 450 people in Arkansas, including dealerships in Texarkana and El Dorado.