Russellville woman helps others after bout with breast cancer 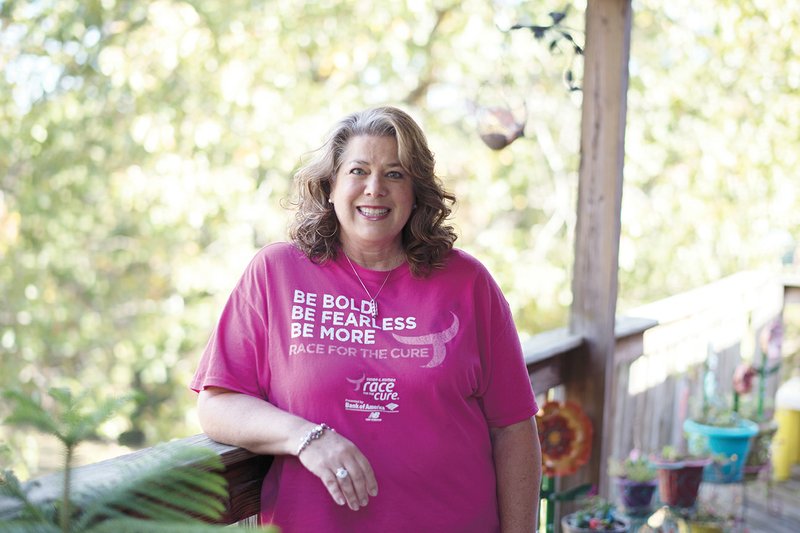 Rhonda Cole of Russellville has dedicated much of her life to helping others go through breast cancer, the same disease she overcame after her diagnosis in October 2011. Another breast cancer survivor profile is on page 7V.

Sitting on the sand at the beach is one of the most relaxing times in life for many people, and in October 2011, that is what Rhonda Cole, 53, of Russellville was looking for when she embarked on a girls trip to Navarre Beach in Florida.

As Cole and her friends were preparing themselves for a relaxing day at the beach, which included putting on swimsuits and shaving, the side of her thumb brushed against a lump on her left breast that hadn’t been there before.

“I went on and enjoyed the week, but I kind of had a feeling. I did have a good time. I didn’t worry about it, but I knew when I got home I needed to have it checked,” she said. “I don’t think I would’ve ever found it if I hadn’t been at the beach because I wouldn’t have been normally shaving as well as I

was shaving, because it was October.”

Cole said she had been having mammograms since she was 40 years old because her sister had breast cancer, but Cole said the timing on finding her lump was fortunate.

Cole said her reaction may not have been an ordinary one, but that was a result of other challenges life had thrown at her.

“This is going to sound crazy. I was OK. I was all right. It’s not great, but I just didn’t really panic. I just tried to put my trust in the Lord,” she said. “The story goes further, but I also have severe depression and anxiety, so I felt that might have been partly why I handled it so well because I had worked hard on my anxiety and depression, so I knew that actually panicking and overworrying — that was worse, getting in that state of mind.

She said she even joked to her friends on days of treatment, saying she was going to her “day at the spa” because she got to lie in a comfortable chair with a warm blanket.

For treatment, Cole had a left-side lumpectomy, along with a few surgeries to remove some lymph nodes. She also had a port put in and had six months of chemotherapy and about 38 radiation treatments. Because she tested positive for HER2, she underwent a year of treatment with Herceptin. After all of her treatments, Cole’s cancer was finally in remission.

Cole said the entire process made her stronger and allowed her to deal with her other problems in life, which included aging parents; caring for her mother, who has had Alzheimer’s disease for 10 years; losing about half of her business as a hair dresser, something Cole’s been doing for 37 years; and weight gain from the treatments. Cole said God, her husband of 34 years and her three children were her biggest strengths to get through her battle with breast cancer.

“It impacted [life] for the good, and it impacted it for the bad. I guess it’s helped me to be stronger, to take one day at a time, to enjoy the small things in life [and] to quit waiting for happiness — to find it in each day, something in each day,” she said. It’s helped me to help others. That’s a big thing.”

To help others going through what she went through, Cole has counseled numerous women with cancer and has also made and donated what she calls “chemo caps” for more than 250 women. Being a hair dresser, Cole also helps counsel women through the process while she is shaving their hair that is thinning or falling out as a result of the treatments.

“When I shave other women’s hair off, I try to make it a special time and tell them this ain’t fun, but just try to make it as fun as you can make something that is terrible,” she said.

While some people might call Cole a hero, she said the real heroes are the women who have metastatic cancer because they have to go through the process throughout their lives.

Since overcoming breast cancer, Cole has made an annual trip back to Navarre Beach each October as a sort of pilgrimage for defeating the disease.

“It’s just kind of a celebration that I made it another year to go back to the beach. It’s the place I love to be,” she said. “I love to snorkel for seashells, and I’ve done a lot of seashell decor. I’ve made large mermaids and a lot of wreaths, and I’ve sold a lot of things, given a lot of things away, a lot of seashell decor, but I snorkel for my own seashells. That’s just my way to celebrate — to go back around the same time every year.”