Inventor mechanized sushi to save rice 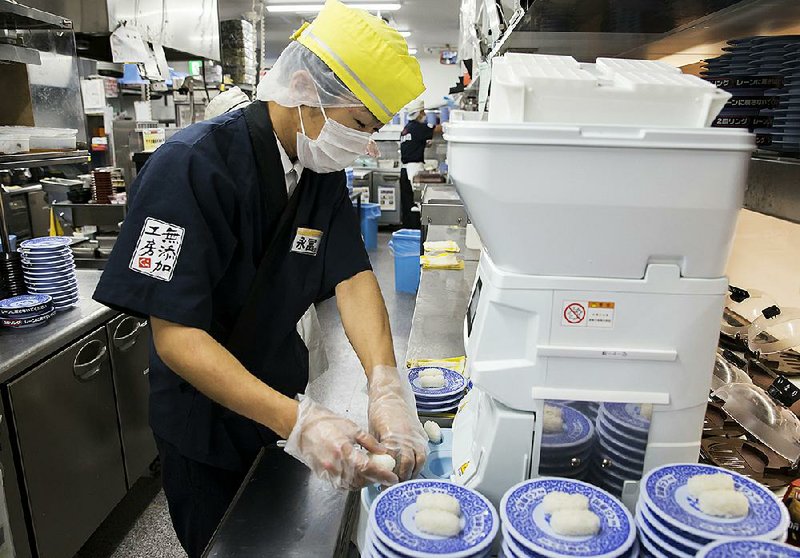 Kisaku Suzuki, creator of the world's first sushi robot, once ran a company that made candy-wrapping machines. And he was angry.

Why had the Japanese government embarked on a policy to limit rice production, effectively paying some farmers to keep their paddy fields idle? For Suzuki, rice was the sacred heart of the country's economy. He started to think about how to make the staple food more popular, so that Japan had no reason to restrict the crop.

And that's when it came to him: He would use his company's knowledge of candy-packaging machines to develop the robot. The idea, while off-the-wall in the mid-1970s, had a simple premise. If he could lower the cost of making sushi by mechanizing parts of the process and reducing the need for highly paid chefs, he could bring the previously elite Japanese dish to the masses, and in doing so increase demand for rice.

Four decades later, Suzumo Machinery Co.'s robots are used by about 70,000 customers around the world, ranging from sushi chains to factories, and account for about 70 percent of the market for the equipment at restaurants, according to Suzumo's estimates. Kaiten sushi, also known as conveyor-belt sushi, has become a $6 billion industry in Japan alone, partly thanks to Suzuki's invention.

Cheap sushi "couldn't have happened without our machines," said Ikuya Oneda, who succeeded Suzuki as Suzumo president in 2004, a year before the founder died, and took over his life's work. "You can certainly say that."

When Suzuki started to create his robot, he met nothing but resistance. In 1976, sushi was still largely a food for special occasions. It was mostly sold through a legion of small restaurants, where artisan chefs dispensed morsels with no price tags and charged how they saw fit.

Not surprisingly, those chefs were up in arms when they heard about Suzumo's plan. In their view, it took 10 years to train someone to make sushi. No machine could possibly do the job. Suzumo asked some of the very people it was trying to depose to give their opinions on the prototype. "They said, 'This is no good, this is terrible, I don't know what this is,'" said Oneda, 73, who became chairman of the company this year.

After three years, Suzumo was nowhere near its goal and running out of cash. We thought "the company would go down the tubes," Oneda said. "We thought about quitting."

Suzumo stuck with the task, and two years later the sushi chefs finally said the machine was usable. In 1981, the company completed its first robot, which formed sushi rice into balls called nigiri. These days, it offers 28 different sushi machines.

"What they've done is allow kaiten restaurants to democratize and make good Japanese food affordable and accessible," said Robin Rowland, chairman and chief executive officer of Yo!, a U.K. sushi chain with almost 100 restaurants globally. "We serve 7 million guests a year. You're talking about 500 to 600 dishes on our belts in the U.K. It's a lot of food. And you need to automate some of that."

But even so many years later, the debate still rages about the machines. For purists, using robots just isn't the same.

"It's an entirely different genre," said Yoshikazu Ono, son and heir of Jiro Ono, the master chef featured in the documentary Jiro Dreams of Sushi. "Sushi isn't just balls of rice. The process is the most important thing. It requires relentless practice to make just one piece of sushi rice -- things like how you select, prepare and cook the rice, how much water you use, and so on. You can't get that from a robot."

At the headquarters of Kura Corp., about an hour south of Osaka, Kunihiko Tanaka bristles when he hears that argument. For the president and founder of Japan's second-largest sushi chain and a longtime Suzumo customer, the artisans are on the wrong side of history.

"The era where it's OK to make sushi with your bare hands is over," Tanaka said, referring to artisan sushi chefs in general. "They still do that, and say that is the real sushi. Things that should be changed should be changed."

Already, about three-quarters of Japanese people say that when they eat sushi, it's from a conveyor belt, according to a survey published by fishery company Maruha Nichiro Corp. in March. Almost half of them choose which restaurant based on price.

Michael Booth, a food writer whose latest book, The Meaning of Rice, is set for publication in October, sees room for both types.

"I want everyone to get a chance to taste what amazing sushi from Jiro tastes like, because it's a very, very different experience," Booth said. "But then again, cheap, mass-produced sushi is like the entry drug into the sushi world, and that can be a good thing, too. People are exposed and may become curious as to what great sushi tastes like."

In a sense, Suzumo dealt a blow to one part of traditional Japan, the artisan sushi business, so that another could prosper: the rice industry. It was an act of political subversion, attempting to derail the government's policy of controlling the price of rice.

"As tastes became westernized, demand for rice began to decline," said Eiji Minemura, an official at Japan's agriculture ministry. "We took the policy of decreasing production to adjust to oversupply."

Oneda and his colleagues' actions show they never agreed. After developing their first sushi machines, they helped pioneer a Japanese hamburger that uses rice patties instead of bread. They helped mechanize the kitchens of rice-bowl restaurants. And they even made a California roll sushi robot, as they targeted U.S. demand for the food as a healthy and trendy choice.

It's true that by one narrow definition, Suzumo didn't succeed. Japan has kept controlling rice production since first introducing the policy in 1971. And demand for rice has fallen.

Still, the company's share price has more than tripled since a low in February last year. Investors think Suzumo will benefit from the labor shortage in Japan and the overseas sushi boom, Oneda said. Of the three analysts covering the stock, all recommend buying.

But for all the fanfare, Oneda -- as he carries on Suzuki's legacy -- is still thinking about the rice.

"Do you eat a proper breakfast?" he asks the Japanese reporter. "What do you eat? I bet it's bread, right?"