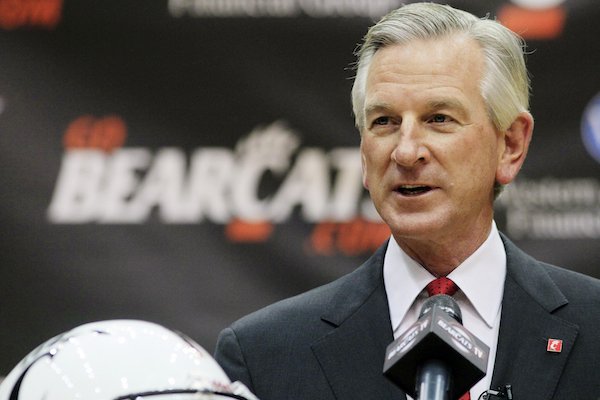 Tommy Tuberville speaks at a news conference after he was introduced as the new head football coach at the University of Cincinnati, Saturday, Dec. 8, 2012, in Cincinnati. Tuberville had been head coach at Texas Tech, and previously at Auburn and Mississippi.

Tuberville -- the former head coach at Mississippi, Auburn, Texas Tech and Cincinnati, and a current analyst for ESPN -- told the Little Rock Touchdown Club crowd at the Embassy Suites on Monday that he is in favor of the University of Arkansas, Fayetteville continuing its contract with War Memorial Stadium after the 2018 season.

"You need to play games in Little Rock. The Hogs need to play right here," Tuberville said. "There's some cases that are different. This is one of those.

"This Razorback football team was built with many, many thousands of people that weren't in Fayetteville, Arkansas, in that corner of the state. There's a unique situation.

"I would have probably never gotten into coaching if it weren't for War Memorial Stadium."

Tuberville was 159-99 over 20 seasons as a head coach across his four stops. He led Auburn to a 13-0 record and an SEC championship in 2004, but the Tigers did not play for the BCS national championship. USC defeated Oklahoma in the Orange Bowl to capture the BCS title.

When he was growing up in Camden, Tuberville said he never attended a Razorbacks game in Fayetteville. Instead, he went to Little Rock to watch the Hogs play.

"That left a lasting impression on me," Tuberville said.

Tuberville, who turned 63 on Monday, recalled a meeting with the late Frank Broyles at a golf outing in Augusta, Ga. He and Broyles, the former Arkansas football coach and athletic director, argued about the future of Razorbacks games at War Memorial.

"There's a lot of football players south of Fort Smith that want to play for the Razorbacks," Tuberville said. "I told Coach Broyles one time that college football is not all about money, it's about people."

Arkansas drew an announced attendance of 36,055 at War Memorial Stadium in its season opener Aug. 31 against Florida A&M, a 49-7 victory. Florida A&M was the next-to-last game Arkansas is contractually obligated to play in Little Rock, where the Razorbacks have played at least once annually since 1933.

Arkansas' contract with the stadium calls for next season's game to be against an SEC opponent, which will be Vanderbilt, Ole Miss, Alabama or LSU.

Athletic Director Jeff Long said at the Little Rock Touchdown Club on Sept. 11 that he wants to have a decision made on the future of Razorbacks games past 2019 at War Memorial in the next three to five months. He said that he and Chancellor Joe Steinmetz will make a recommendation to Donald Bobbitt, who is the president of the UA system, along with the board of trustees.

Other highlights from Tuberville's speech at the Little Rock Touchdown Club:

• Tuberville on who the best team in the country is currently: "I put my money on Clemson with the running game and defense. They're very hard to beat."

• Tuberville on Alabama residents asking him to run for the governor's office in Alabama: "Heck, I was the one who got them [Alabama] Nick Saban. You ought to vote for him." (Tuberville's Auburn teams defeated Alabama six years in a row from 2002 to 2007, the latter of which was Saban's first year at Alabama. Since 2008, Alabama is 7-2 against Auburn.)