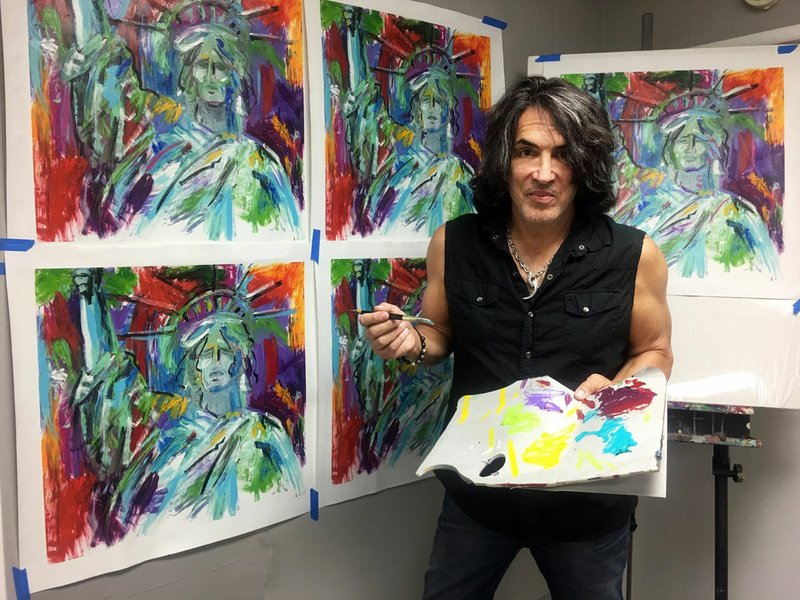 Courtesy Photo Paul Stanley, vocalist and guitarist for the iconic band KISS, is also an actor, an artist and a very proud dad.

KISS, the iconic band he formed with Gene Simmons, is 44 and has sold 75 million records worldwide, filled countless arenas, played at the Olympics and the Super Bowl and was inducted into the Rock and Roll Hall of Fame in 2014.

It's difficult to reconcile that venerable age or that onstage persona with the Paul Stanley on the phone from his West Coast home. That man is thoughtful, soft-spoken, humble, articulate and was willing to stop what he was doing for an interview.

What he was doing was painting -- not the house, he says with a chuckle, but large-scale brightly colored acrylics which have become desired and collectible in their own right.

"I've always defined myself by the avenues and the routes I find to express myself," Stanley says. "I find that any outlet for creativity is to find another part of myself and acquaint myself with another piece of the puzzle."

There's another smile in his voice when Stanley says it was "impossible for him to be a starving artist," but "like most things in my life, I've never really gotten into any outlet for anybody else's benefit except mine. I've found that if I stay true to my own likes and dislikes, it finds an audience. KISS was the band we never saw, something we wanted to see. My art and everything else I've done has been a quest of mine to find enjoyment, and painting was the same."

Stanley adds he "never expected to show anyone my work, and yet when people came over to the house and saw pieces on the wall, they asked me who did them. I was so self-conscious, I didn't sign them." The works still hang unsigned, he says, to remind him of those humble beginnings. "I like introducing people to art or aspects of the arts they haven't been familiar with or have been too intimidated to enjoy," he says. "Not enough people appreciate art because critics tell them their opinion isn't valid unless they've been educated. I tell people good art is what you like, and bad art is what you don't like. In my art shows, I always try to get people to understand what hits them emotionally or viscerally is valid."

Stanley's primary passions remain performing -- "there's no substitute for passion," he says of the continued stature of KISS -- and his family. He has a 23-year-old son, Evan, from a previous marriage and shares three children -- Colin, 11, Sarah, 8, and Emily, 6, with wife Erin.

The eldest, a graduate of the Tisch School of the Arts at New York University, "is really an amazing young man," Stanley says, "who additionally happens to be a musician, a great writer, very charismatic on stage, a terrific guitar player. He's one of those great accomplishments in my life. Really, without trying to sound overly sentimental, the fact of the matter is when we leave this earth, all that matters is what we leave behind.

"Hopefully what we find as we travel life's path is that everything great is made possible by the roots that you plant. And nothing is more stabilizing than family."