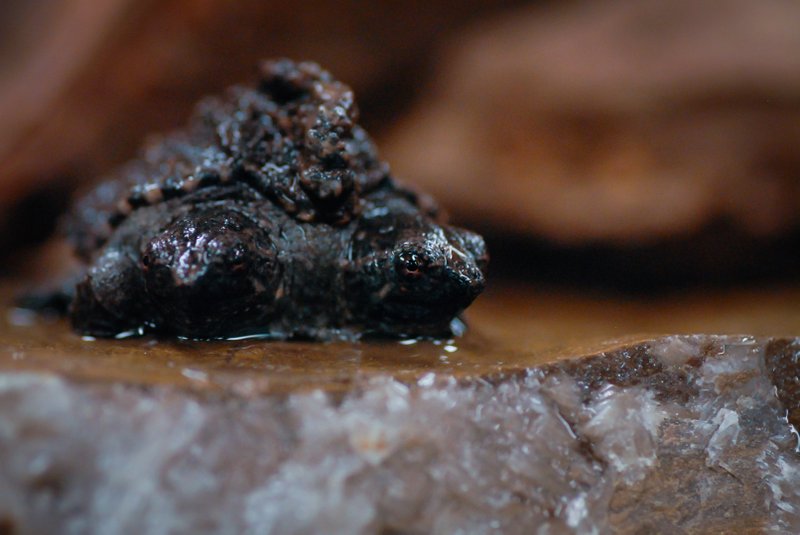 Since she joined the faculty about a month ago, her lab has become home to a snake and a turtle found in Arkansas that have four heads between them.

On Sept. 6, an electric worker found a two-headed rattlesnake outside a home on Arkansas 248. The snake was brought to Forrest L. Wood Crowley's Ridge Nature Center in Jonesboro, then given to Neuman-Lee.

When Neuman-Lee went to pick up the snake Sept. 8, she said, facility director Shaun Merrell asked if she was interested in another reptile— a two-headed snapping turtle found on a farm near Little Rock.

"I said, 'Sure,'" she said with a laugh. The turtle was in her lab less than a week later.

Two-headed animals are rare and seldom survive in the wild, Neuman-Lee said. They move awkwardly and have trouble hiding and finding food.

A challenge of taking care of them, she said, is that it's unclear what internal problems having two heads might cause for the animal. She plans to give them CT scans.

But so far, she said, they appear to be doing just fine.

Both animals are a few weeks old. The snake is too young to be able to eat, but it has been drinking water from both heads, which Neuman-Lee said is a sign its digestive system is working.

She noted that the turtle has eaten from both heads and is becoming less clumsy. At first, she said, it looked like neither head was in control as it stumbled awkwardly around its enclosure, and she was worried it would drown in the shallow water.

But under her care, Neuman-Lee said, it's gotten more coordinated and can quickly flip over when placed on its back. She compared its improvement to how other animals adapt to their environments.

"They're got two heads, so they've got to figure out how that's going to work," she said. "It's amazing."

The snake has two names — Deuce and Hydra. The turtle is currently unnamed, but Neuman-Lee said she might host a naming contest.

Access to the animals is restricted to limit their stress, but Neuman-Lee said she hopes to have them displayed where people can see and interact with them.

On campus, she said, many people want pictures, and some who haven't seen the animals think they're a hoax. But she said people have overall had a surprisingly positive reaction.

"People are really excited and interested," she said. "It's pretty impressive, really, that we have these animals in northeast Arkansas."