Catalans press ahead with secession vote 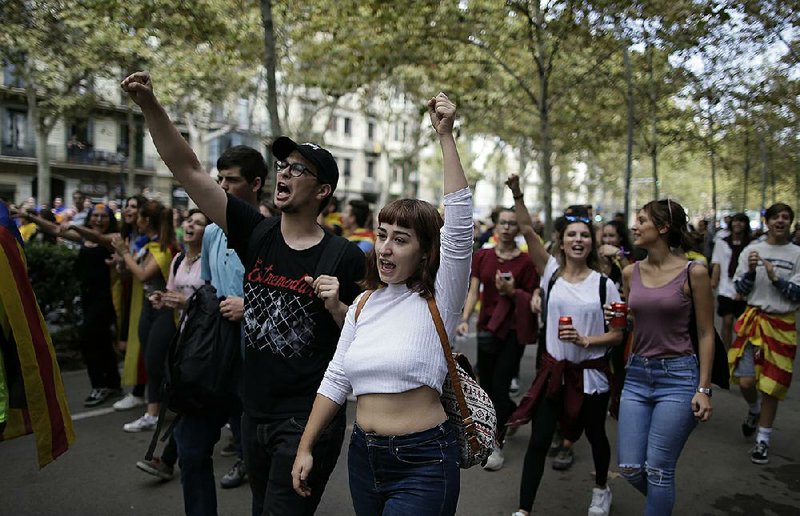 MADRID -- Authorities in Catalonia intend to ensure that a disputed referendum on independence from Spain will take place peacefully Sunday despite a crackdown on the vote by the national government, the region's interior chief said Thursday.

Minister Joaquin Forn said Catalan officials are determined to proceed with Sunday's vote for the region of 7.5 million people in northeastern Spain even though the central government in Madrid says the referendum is illegal and can't happen.

"The [Catalan] government's commitment is very clear: People will be able to vote," Forn told reporters in Barcelona, the main city in Catalonia.

Forn met with regional and national security officials to defuse mounting tensions ahead of the ballot. In recent weeks, Spain's Constitutional Court has ordered the ballot to be suspended and police have confiscated ballot papers and posters for it.

The Spanish Constitution refers in Article 2 to "the indissoluble unity of the Spanish nation."

The central government is deploying 10,000 police officers in Catalonia for the ballot, Forn told reporters. He insisted, however, that the Catalan police force called the Mossos d'Esquadra must take its orders from local authorities. The force's loyalty has been torn between the central and regional governments.

Earlier Thursday, Catalonia's foreign affairs chief, Raul Romeva, called for the European Union to support the referendum, echoing an appeal by Catalan regional President Carles Puigdemont. Puigdemont has accused the EU of "turning its back" on Catalonia in its conflict with Spain's central government.

Barcelona Mayor Ada Colau also urged the EU to safeguard "fundamental rights and freedoms in Catalonia" by mediating the standoff between Catalan officials and national officials in Madrid before Sunday's planned vote.

"If Europe wants to have credibility as a project, it needs to redirect this situation," Colau said.

Thousands of striking Catalan university students, many carrying pro-independence flags, marched in Barcelona to protest the central government's crackdown on the ballot.

The watchdog added that Spanish authorities' legal measures against Catalan media to stop the spread of information about the referendum have contributed to an atmosphere of extreme tension.