Makings of a 'flash drought' lining up in Arkansas, agency says 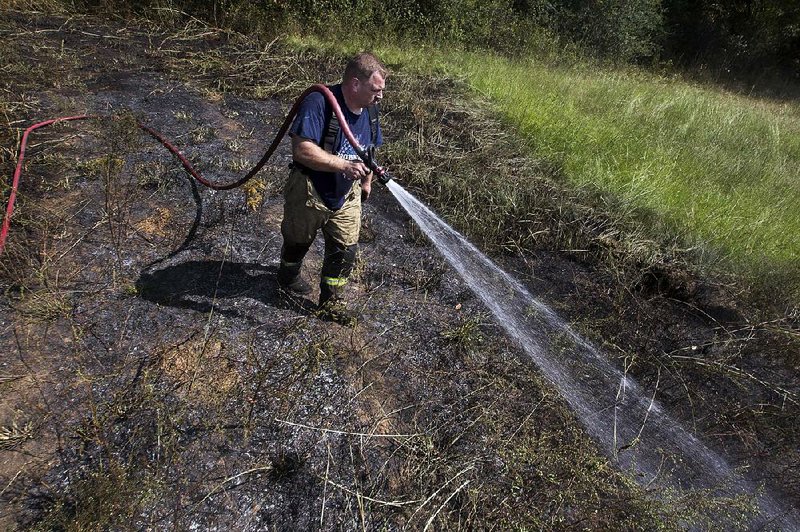 North Pulaski Fire District 15 volunteer Capt. Marcus Steele puts out a brush fire Thursday off Gribble Road in Jacksonville that started after winds blew embers from a tree stump a homeowner was burning into woods behind the home.

More than 60 percent of Arkansas is considered to be in some form of a drought, and with a rain-free forecast for the next week, meteorologists say the state is on the brink of a "flash drought."

The U.S. Drought Monitor, an agency based at the University of Nebraska-Lincoln that compiles weekly drought information across the country, said conditions in Arkansas are deteriorating rapidly.

According to the monitor, 60.43 percent of the state is considered to be "abnormally dry," meaning the area's rainfall is 1 to 2 inches less than average for a 30-day period. The area extends west of a line from Union County to the western edge of Clay County.

A sliver of southern Miller and Lafayette counties were deemed to be in "moderate drought," meaning rainfall over a 30-day period is 2 to 3 inches below average.

The only area free from drought is eastern Arkansas, which saw heavy rains when remnants of Hurricane Harvey moved through earlier this month.

"It's developing quickly in Arkansas," said Brad Rippey, a U.S. Department of Agriculture meteorologist who compiled this week's drought monitor report. "Until you get some rainfall setting up, you've got conditions worsening."

On Sept. 19, 47 percent of Arkansas was considered "abnormally dry." A week earlier, only 5 percent was in drought.

Meteorologist Brian Smith of the National Weather Service in North Little Rock said Little Rock has received only 0.45 inch of rain in September, making it the the eighth-driest September in the city's history.

The driest September for the capital city was in 2015 when only 0.12 inch of rainfall was measured.

The flash-drought conditions mirror a similar drought that occurred in Arkansas last year in late September and October.

"It's not unusual to have long stretches of dry weather in the fall," Rippey said. "But sometimes it's broken up by tropical activity."

Rippey said high-pressure systems parked over the southwestern and eastern United States will block tropical moisture from the Gulf of Mexico from reaching Arkansas anytime soon.

The quickly growing drought extends from central Texas through Arkansas and Illinois and north into southern Michigan.

The worst drought in the United States is in Montana where 94 percent of the state is considered to be in some form of drought, including 18 percent deemed "exceptional drought," meaning rainfall over a 30-day period is 5 inches or more below average.

"This time of year, fronts come from the West and bring winds," Rippey said. "It gets serious when you think about fire danger. It can get bad."

Lafayette County Judge Mike Rowe said he expects to issue a burn ban for his county soon unless it rains.

"I was driving in the county this morning and it's extremely dry," he said. "Some of the creeks I crossed were very low. If we don't get rain in a few days, we're going to have to go into a fire ban."

He said he spoke with county judges in neighboring counties who have expressed the same concern.

The Arkansas Forestry Commission has deemed all but nine southeast Arkansas counties "moderate" for wildfire danger. Forestry officials urge people to burn debris, trash and brush only in early hours or the evening when winds are not as brisk.

There is a benefit to the dry conditions, he said. His county road crew repaired a road damaged by earlier floods, installing culverts and shoring up weak spots to avert future water damage.

"We couldn't do that if the water was up," he said.

Jason Kelley, an extension agronomist with the University of Arkansas, Fayetteville, said farmers are also taking advantage of the drought. The dry soil allows farmers to harvest summer crops of cotton, soybeans and corn. They are also able to till fields.

"We definitely need moisture, though," he said. "If it stays dry, we may have problems with [winter] wheat.

"Three weeks from now, if it's still as dry as it is now, we will get concerned."

Conditions are expected to remain dry through Tuesday, the Weather Service said. There is a slight chance of rain Tuesday for central and southern Arkansas. 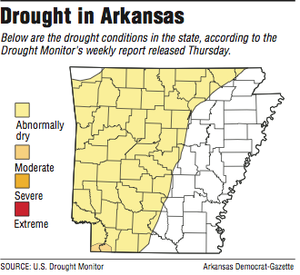 A map showing drought in Arkansas

Print Headline: Makings of a 'flash drought' lining up in state, agency says