Student defaults on loans drop off in Arkansas 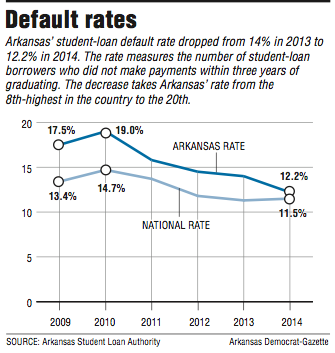 The percentage of people in Arkansas who did not make payments on their federal student loans within three years of graduating has dropped from 2013 to 2014, according to newly released data from the U.S. Department of Education.

At the same time, the nation's rate increased for the first time in five years by 2 percentage points: 580,671 of more than 5 million borrowers -- or 11.5 percent -- were in default in 2014, compared with the 11.3 percent -- 593,182 of more than 5.2 million borrowers -- in default the previous year. The department does not say how much money is attached to the defaulters.

The rate can be telling of a state's job market, economy and college completion rates, officials said. But mostly, it is watched closely by colleges and universities, which can face sanctions if their rate exceeds 30 percent for three consecutive years or if it exceeds 40 percent in one year. One of the repercussions is that a school could lose its eligibility to offer federal financial aid, including the Pell grant program for low-income students.

For Arkansas, the 1.8 percentage point decrease has taken the state from having the 8th-highest default rate in the nation in 2013 to the 20th-highest in 2014. None of Arkansas' schools reached the 30 percent threshold.

"We are very pleased with the results that we've seen," said Tony Williams, the executive director of the Arkansas Student Loan Authority, which among other things, helps students manage their school loans. "Arkansas is in a difficult situation because of the limited job opportunities.

"Our college completion rate is one of the lowest in the country, and then also, if you look at credit scores, we have one of the lowest average credit scores in the country. You take all those factors, and it's just a recipe for a high student-loan default rate. But, you can see these results and see that if you focus your efforts on a particular issue, you can make a difference."

Students are in default if they have not made a payment in one year. The designation leads to collection of fees and additional interest, a negative credit rating, wage garnishment and loss of income-tax refunds.

Schools have also tried their own measures, including reaching out to students on their own, being cognizant in how they present financial-aid packages and even leaving the federal loan program.

Some national policy advisers consider not participating in the federal loan program "an extreme" reaction.

New America, a Washington, D.C., think tank, said in a paper published earlier this year that 1 in every 14 colleges and universities that have other forms of federal financial aid do not offer loans.

"The two-year sector generally serves a higher proportion of low-income students and students of color than traditional four-year institutions. As a result, those who have historically faced the most barriers accessing higher education have also been disproportionately affected by colleges' decisions to abandon the federal loan program."

The fear is great among some community colleges, said Ben Miller, senior director for postsecondary education at the Center for American Progress, an independent nonpartisan policy institute.

"For a lot of them, the thing they care about is Pell," he said. "Losing Pell for 5,000 students isn't worth the risk for 50 borrowers. It's a real challenge because you don't want people dropping out of the loan program and not providing aid to people who need to complete or risk that people might take out a private loan."

In reality, small beauty and cosmetology schools are hit more often with rates exceeding the 30 percent threshold than community colleges, he said. Plus, the federal Education Department has an appeals process for schools that exceed the threshold. When the three-year default rate first went into effect in 2014, Miller said, there were 21 colleges with default rates over 30 percent, and 13 still offer financial aid.

"You hear a lot of hammering for schools about failing the default-rate test, but basically no one gets caught," he said.

At least two of Arkansas' public two-year institutions -- Cossatot Community College of the University of Arkansas in De Queen and Arkansas Northeastern College in Blytheville -- said not participating in the federal loan program has not affected their enrollment or students' access.

Steve Cole, the chancellor at Cossatot, said the college decided to stop participating in 1995 after it saw a very, very high default rate. At that time, the school had about 600 students and relied on Pell grants -- federal aid that students do not need to repay -- for tuition and fee revenue, he said.

Very, very few students ask about loans, he said, but when they do, the school tells its students of banks that offer them, he said. Cossatot's tuition and fees are "very affordable," and students who are awarded Pell grants can use that to cover most, if not all, of their school expenses, he said.

"We just don't think it's fair to a lot of our students" to participate in the federal loan program, Cole said. "We find other ways."

Arkansas Northeastern opted out of the program after the 2010 fiscal year, said its president, James Shemwell.

Students, upon seeing the maximum amount they could take out for a loan, would often take out the full amount, he said, adding that loan counseling rarely made a difference.

"We were seeing these cases, and it's such an incredible disservice to put that in front of students who are facing financial hardships," he said. "What I so wish the government would do with this is they ought to tie student-loan amounts and access to job prospects and the majors that students are declaring. If someone wants to declare a major that does not have good job prospects, not a good deal of income, then we ought to be limiting the amount we're investing in that."

Both Cole and Shemwell said students can always supplement federal financial aid with institutional, state or private scholarships, or even work-study programs. The state also has grants, such as Arkansas Future, to help.

The University of Arkansas-Pulaski Technical College -- one of the state's largest community colleges -- has remained in the loan program. In 2010, the school faced a 28.6 percent default rate, prompting its accrediting agency to ask for Pulaski Tech's plan to reduce the rate, said Lavonne Juhl, its director of financial aid.

The community college went to work to implement changes and find outside help to lower the rate. In fall 2013, the school started disbursing students' financial aid in two waves, hoping to lessen or control student debt. Students starting in the fall semester would get aid in the fall and then the spring. Those starting in spring and summer semesters would still get two disbursements.

At the same time, the college began the process in getting a third-party vendor to help track down its delinquent borrowers. They signed on with the state Student Loan Authority at a varying annual rate that is about $30,000, she said.

Before that, Pulaski Tech would send letters to students who were about to be in default, but many times, the letters were returned because addresses were no longer current, Juhl said.

The state agency pulls reports for the college of students who are at least 90-days delinquent in paying loans, contacts those students to let them know what their options are and informs the college of the "cure" for the students, she said.

The next spring, in 2014, the North Little Rock college stopped packaging students' maximum loan eligibility for federal unsubsidized loans, which start accruing interest at disbursement. The students' award letters would show the amounts they received from Pell grants and federal subsidized loans, which are interest-free while students are still in school, she said.

Under federal law, schools have to disclose all financial aid options to students.

That same semester, the college required students who were on financial-aid suspension -- those who aren't making "satisfactory academic progress" -- to see an academic adviser and to complete financial-aid awareness counseling, Juhl said. The college also cannot tie the counseling to disbursement of financial aid, under federal law.

Those efforts have reduced the college's default rate to 18 percent in 2014, the latest available year.

Community colleges are prime examples of borrowers who are the typical defaulters, said Karen McCarthy, director of policy analysis at the National Association of Student Financial Aid Administrators.

"A large body of research shows that most of the students who go into default don't finish programs," she said. "They're the ones who go to school, start borrowing money, and then they don't finish. Then they don't end up getting the employment that's supposed to help them pay back the loan."

Community colleges, she said, tend to have lower completion rates than four-year universities. And two-year schools are generally cheaper to attend, but students there are still seeing the maximum annual loan limits for which they are eligible, she said. The schools cannot set lower limits for the loans.

Some schools have really embraced loan counseling and are encouraging Congress to allow for more flexibility in that realm. Students are required now to take entrance and exit counseling when borrowing for the first time.

By far, the most effective initiatives to reduce default rates has been retention efforts, those that help people stay enrolled and finish a degree, she said.

The group has been advocating for changes to the federal Higher Education Act, which is set to be reauthorized since it expired in 2013. The changes range from the counseling flexibility to limiting maximum loan amounts.

"We hold schools accountable for default rates but don't give them enough control over the student-loan borrowing," McCarthy said.