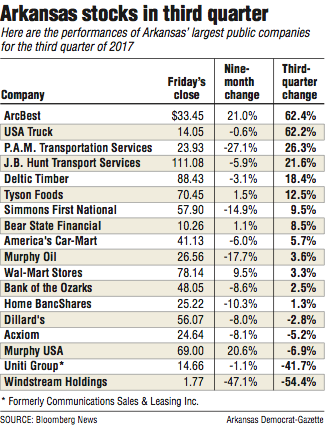 The four major trucking companies in Arkansas posted the best third-quarter stock performances compared with the rest of the state's publicly traded businesses.

Fort Smith-based ArcBest led the way with a 62.4 percent return in the third quarter, followed by USA Truck, up 62.2 percent; and P.A.M. Transportation Services, which rose 26.3 percent.

"The entire trucking sector is in good favor," Williams said.

"That said, even the most efficient firms fight and struggle to establish a competitive advantage as they wrestle with labor and regulatory costs," Williams said.

With the addition of the logistics division, ArcBest now has multiple lines of business to service, Williams said.

"Management adjusted regional staffing operations as they focused on controlling expenses and increasing productivity," Williams said. "The logistics arm results have improved but market dynamics have limited price increases as excess capacity is still being absorbed."

P.A.M., based in Tontitown, had a tough second quarter, Williams said.

"As the firm tried to diversify outside of the automotive transport sector, excess capacity negatively impacted the redeployment of those assets," Williams said.

The inability to rapidly divert that equipment as demand waned led to substantial asset underutilization, he said.

Windstream Holdings of Little Rock had the worst performance of the quarter, losing 54.4 percent.

Windstream investors were hurt by the complete elimination of the dividend, Williams said.

"The simultaneous announcement of a $90 million stock buyback has been unable to prop up the share price," Williams said. "Despite merging with Earthlink 11 months ago, investors seem concerned that the rural telecom sector is no longer relevant."

Uniti Group in Little Rock, a spinoff from Windstream, had the next worst decline in stock price for the quarter, falling almost 42 percent.

"The negative outlook reflects continued uncertainty around Windstream's future performance, which could jeopardize Uniti's operating performance, given that the vast majority of its cash flow is derived from Windstream's lease payment," he said.

That seemed to be beyond the risk threshold of many investors, Williams said.

Murphy USA had the third-lowest stock performance of the quarter. The shares fell 6.9 percent.

The El Dorado company's shares took a hit late in the quarter as concerned investors sold in fear that sales at its stores were slowed by this year's hurricanes, Williams said.

Simmons First National Corp. was up 9.5 percent for the quarter, followed by Bear State Financial, up 8.5 percent; Bank of the Ozarks, up 2.5 percent; and Home BancShares, up 1.3 percent.

"It's not surprising that there would be a lull in the market," Binns said. "There's a lot of things happening on the national front."

Binns noted efforts to repeal the Patient Protection and Affordable Care Act, a newly released tax package that could include a cut in corporate taxes and possible regulatory relief for banks.

"The marketplace is just taking a watch-and-see attitude," Binns said.

For the first nine months of the year, the Arkansas Index, an index of the 18 largest publicly traded companies in the state, is up 2.1 percent. The index was in negative territory for most of the year before rallying in the past week.