A conservation success story in Arkansas and the nation 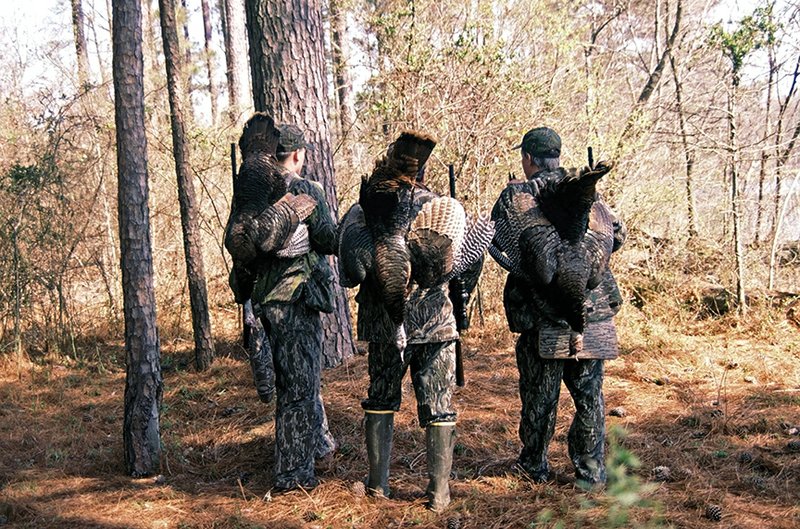 Hunting the wild turkey is an affliction that infects millions of American sportsmen, like these hunters in Mississippi.

Turkey hunting is a sport steeped in history and tradition. Archaeological evidence indicates Native Americans used wingbone turkey calls as far back as 4,000 years ago, calling in turkeys that were hunted for food. When European settlers arrived on the continent, the abundant wild turkey was hunted for both food and sport and was part of the first Thanksgiving celebration between the pilgrims and Massasoit and his Wampanoag people.

According to accounts from pioneers and settlers, there were millions of wild turkeys in North America 300 years ago. Many were tame enough that colonial hunters would approach within gunshot range without spooking them. Turkeys were common food for both natives and settlers, and by the mid-1800s, market hunting of wild turkeys was flourishing.

The delicious wild turkeys were popular fare in 19th-century America, and their commercial slaughter continued for decades. As a result, turkey populations began a dramatic decline throughout much of the bird’s range. The nation’s growing human population worsened the problem. Marked expansion in agriculture and timber cutting near the turn of the century destroyed the turkey’s prime habitat, and the numbers of this magnificent game bird plummeted even further.

As more and more land was cleared, turkeys disappeared. By the late 1800s, wild turkeys were gone from most of the East, and by 1920, they could no longer be found in 18 of the 39 states in their ancestral range. The entire North American population tumbled to just 30,000 birds, a number comparable to today’s estimates for polar bears worldwide.

One disheartened turkey admirer wrote about the passing of the birds: “The last bird may have been shot, but if he was, it was the ax and not the gun that made him the last.”

Fortunately, the last turkey never was shot. Even during the birds’ most dire period, around 1930, there were remnant flocks hanging on in the backcountry of a few Southern and Eastern states, including Arkansas.

Crass, irresponsible hunting of the hen and tom had cut sharply into the supply of Arkansas turkeys by the 1920s. The Arkansas Game and Fish Commission, founded in 1915, told the 1927 state Legislature, which then set game laws, that the final specimen of this magnificent king of the game birds would soon follow the trail to oblivion so recently traveled by the buffalo and prairie chicken if the Legislature did not act with needed restrictions. Fortunately, the General Assembly took heed. It passed an act that shortened the hunting season and created refuges where wild turkeys were protected.

In 1933, the situation became worse, and the season was shortened once again. During the next several years, the turkey population gradually nosedived to the point that the commission stopped all hunting with the close of the 1945 season.

Several factors had taken a toll on the turkey between 1900 and 1945. The birds had been concentrated into small areas with the spread of civilization and the cutting of virgin forests. Illegal hunting and commercial hunting contributed heavily to the loss.

In the 1950s, the Game and Fish Commission was enjoying great success in restoring deer by trapping them in areas of high concentration and restocking them in areas where only a few whitetails ranged. Biologists decided a similar program with wild turkeys might prove equally successful. Some stocking efforts were made with semitame birds, but these proved unsatisfactory. Hunters often found those turkeys feeding in farmyards instead of dense woods, and shooting a turkey perched on a pump handle near the watering trough just didn’t have much sport to it. Moving turkeys from some parts of the state to others began to pay off, however, because the hunting season had been reinstated by the late 1950s, when the statewide harvest rose to 566 birds.

In 1962, as the commission began to take a more scientific approach to overall game management, the first split turkey season was held in 17 counties. By 1965, the list of counties open to turkey hunting had grown to 45 because the restoration program had created more huntable situations. Increased hunting pressure in added areas accounted for the 1964 record, when the annual harvest topped the 1,000 mark for the first time ever.

Restoration efforts remained strong in the 1970s, 1980s and beyond. By 1986, Arkansas had trapped and relocated more than 5,000 turkeys and was continuing the program with roughly 300 birds per year, most of them going from the Ouachita Mountains and areas along the Mississippi River to the Ozark Mountains and Gulf Coastal Plain. The estimated 1986 statewide turkey population was 100,000.

There were two additional assets to the wild turkey’s recovery that should be mentioned. One was the passage of the Federal Aid in Wildlife Restoration Act in 1937, which placed an excise tax on firearms, ammunition and other hunting equipment. Lobbied for and supported by sportsmen, this tax has raised billions of dollars for wildlife restoration. Much of the funding for turkey restoration programs came from this source.

Today, thanks to these combined efforts, approximately 7 million wild turkeys roam the continent. Hunted populations occur in every state of the U.S. except Alaska, and turkeys are even hunted in Mexico and Canada.

Arkansas’ turkey population has grown from near extinction a century ago to approximately 140,000 wild turkeys today, with 16 hunting days available in April this year, plus a two-day special youth hunt.

As our state’s turkey season gets underway in early April, consider sharing the uplifting story of the wild turkey’s recovery with your family and friends. Ultimately, it is a story of cooperative conservation — of hunters, wildlife managers and nature enthusiasts all coming together to save a species. The millions of wild turkeys strutting in the fields and forests of America, including in The Natural State, are a testament to the foresight, innovation and success of these dedicated conservationists.