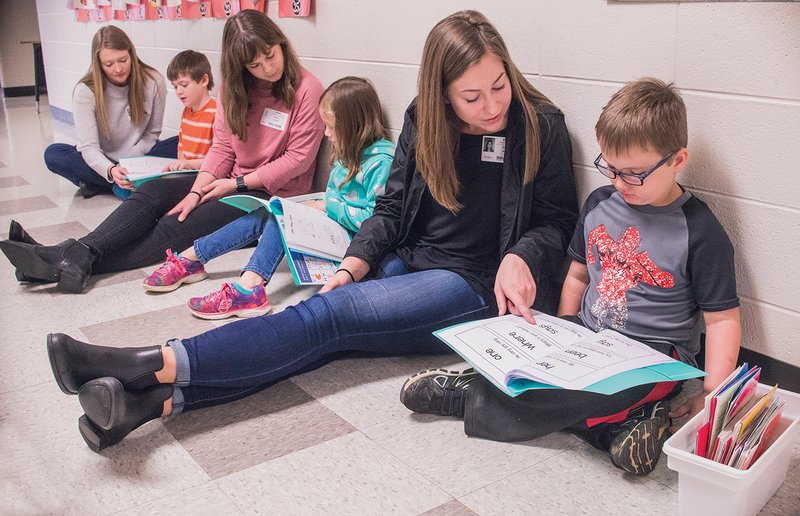 Bison Buddies Katelyn Walker, from left, works with Bentley Robinson, 7; Bryle Alcorn works with Kianna Phanen, 7; and Delaney Bowles works with Xain Jones, also 7. Almost 100 Harding University student-athletes volunteer to help students at Westside Elementary School in Searcy, as well as other schools in the area. The women pictured are members of the golf team.

Xain Jones, a first-grader at Westside Elementary School in Searcy, isn’t sure what the Bison Buddies teach him. He just knows the Harding University athletes are fun.

He said his favorite part is “playing a game” with the college students when they come to his class. He is in Michelle’s Marino’s homeroom.

The Bison Buddies program, which started in 2010 with football players visiting Harding Academy, was taken on by the university’s Student-Athlete Advisory Committee. Almost 100 volunteers from 16 men’s and women’s athletic teams visit elementary schools each week.

Harding senior baseball player Jack Thomas of Little Rock had two roommates when he was a freshman, Jon Aaron Howell and Kohl Blickenstaff, who were football players, and they talked highly about the Bison Buddies program. Thomas wanted in.

Thomas, president of the Student-Athlete Advisory Committee, expanded the program, with his former roommates’ help, to include other Harding athletes and more elementary schools. Thomas visits a third-grade classroom at Westside Elementary School.

“SAAC is basically the leadership body within the athletic department. It comprises leaders of each different sport selected by coaches,” Thomas said.

“About three years ago, we discovered a need for more positive role models in the Searcy School District. Male and female athletes go, and the teachers appreciate both,” Thomas said. “It’s nice, you know, and [the children] all gravitate toward us in different ways.” He mentioned a female soccer player who has a good rapport with students.

Harding Academy second-grade teacher Donna Brown said the program started when a Bison football coach had a son in second grade. The coach asked Brown’s co-teacher, who has since retired, if she’d be interested in having the players volunteer with the students.

“It started in second grade, and it’s expanded to other grades,” Brown said. “The art teacher and others wanted that hands-on help in the classroom.”

Harding Academy’s Bison Buddies are still all football players, she said. Depending on the players’ schedules, the school has had 14 to 30 volunteers per semester.

“I love the interaction between those college guys and the little children,” she said. “It’s kind of one of our things. …. When those Bison Buddies walk into our classroom, they’re celebrities. The kids just cheer.”

She said the football players work on math facts or spelling words with students and participate in special events.

“They’ll show up for Valentine’s Day parties and Christmas parties … even in the evening for events,” Brown said. “The kids love going to their [Harding players’] ballgames, too, and going out and seeing them on the field.”

Brown said the Harding athletes are to be commended.

“It’s totally volunteer,” she said. “They don’t get anything out of it, just being a servant.

“We like to brag — for some of them, coming to Bison Buddies is their very first thing of the day, so they could be in the dorm sleeping.”

Harding Academy Elementary School Principal Bode Teague said her students love the program, and the university students enjoy it, too.

“We get a lot of joy out of just having them here; our students get to read to them, or they read to our students. Every once in a while, they go outside and play with them at recess.”

Teague said the football players also conduct a special chapel service once a year at the school.

“It has become a pretty big deal around here,” he said of the Bison Buddies program.

“We do a little bit of everything as far as things relative to what they’re doing in class,” Thomas said. “We do fun things; we play different games with them that reinforce a lesson in class.”

If the students are learning about perimeter and area, the athletes may build with them and help them with the match.

“Last week, we built a robot. We had dimensions we had to meet for the arm, the body and the leg,” he said. “About two weeks ago we did a game, like a competition, to see who could get the most answers right in a period of time for fractions.”

He said the student-athletes arrive midmorning and usually stay about an hour.

Jackie Starks, assistant principal at Westside Elementary School, is a fan of the program.

“I can tell you the teachers really appreciate the extra helping hand with those students who could use a little extra attention,” she said. “Students with an array of needs can benefit from this partnership. The Bison Buddies are not only valuable learning partners, but they also serve as exemplary role models for our students.”

Thomas said the committee plans to continue the program.

“As student-athletes, we have a platform of influence in the community, particularly with younger children. We hope that Bison Buddies can be a positive use of that platform to promote education and add value to the educational environment in White County.

“While we hope that we can help them learn math, grammar and other classroom lessons, we really hope that they know there is someone who knows their name and cares about their future,” Thomas said.

Xain’s dad, Michael Jones, said he likes the program and what it provides for his son.

“I think it’s a great idea. It helps him a lot, with speech, his math and stuff like that,” Jones said. “[Bison Buddies] randomly help them with a bunch of different things.”

Xain, though, just thinks they’re having a lot of fun.