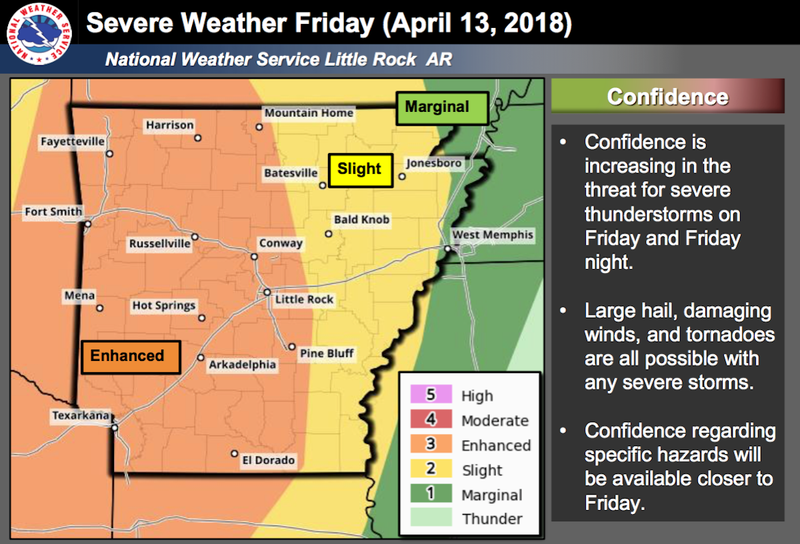 A system set to move through Arkansas on Friday and into Saturday will bring the potential for severe storms across the entire state, forecasters say.

Portions of western and central Arkansas, including Little Rock, face an enhanced risk for storms to turn severe, the National Weather Service said.

In those areas, the primary threats as of Wednesday will be large hail, damaging winds and possible tornadoes.

“Confidence regarding specific hazards will be available closer to Friday,” the weather service said.

The agency’s Shreveport office said that “potentially strong tornadoes” will be possible Friday in its coverage area, which includes southwest Arkansas.

Behind the system, cooler air will be in place — marking the third instance of warmer weather followed by tumbling temperatures in the past three weeks.

Near-freezing temperatures are forecast in Northwest Arkansas on Saturday morning. The remainder of the state will likely be in the upper 30s and low 40s.

At the start of next week, temperatures Monday will again be near freezing in northern and western Arkansas.

The weather service advised residents to take precautions and protect vegetation as well as pets from the cold.

In addition to the severe weather threat, the state’s southeast half could see up to 6 inches of rain between Friday morning and Saturday evening.

Arkansas’ capital city is forecast to receive up to 2 inches. Areas to its north and west will see up to 1 inch, the weather service said.