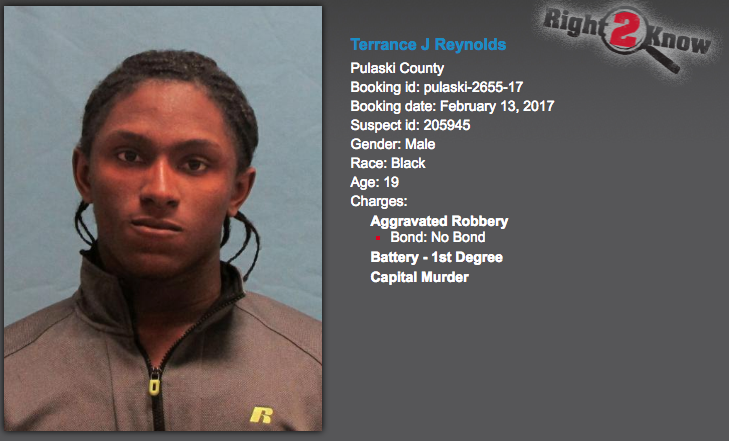 Alexander Powell "Alec" Reed was murdered when three robbers' plans to rob the 19-year-old Little Rock man of an ounce of marijuana, worth about $250, went wrong, the prosecution's only witness to the February 2017 slaying told a Pulaski County jury Wednesday.

Chaffin has pleaded guilty to first-degree murder as an accomplice to Reed's slaying at a residence in the Eagle Hill apartments on Par Drive in Little Rock last year. Three other people in the home were also shot during an exchange of gunfire involving at least three guns.

Linked to the slaying by his blood at the scene, Chaffin is cooperating with prosecutors in exchange for a 20-year sentence, which will require him to serve 14 years before he can qualify for parole.

Chaffin spent most of his time on the witness stand enduring the scornful questioning of defense attorney Gene McKissic during cross-examination.

McKissic questioned how jurors could believe him, given that he initially claimed to have also been a victim, blaming the shooting on two robbers who had suddenly burst into the residence and opened fire.

Repeatedly, McKissic recalled for jurors how Chaffin is cooperating to avoid a life sentence. He even got Chaffin to admit that he would lie to avoid spending the rest of his life in prison.

McKissic also questioned how, in Chaffin's version of events, out of the six people present when the shooting started, the only two who emerged unscathed were Reynolds -- who denies any involvement -- and Reynolds' older brother, who has never been charged.

"They just got lucky?" McKissic asked. "Or they just weren't there?"

[INTERACTIVE MAP: Search all killings in Little Rock in 2017]

Prosecutors have rested their case, with the defense scheduled to begin witness testimony at 9 a.m. today before special Circuit Judge Steven Porch. McKissic has said Reynolds' parents will testify that their son was home in Pine Bluff when Reed was killed.

The attorney did not say whether Reynolds will testify.

Court records show that Reynolds has previously been accused of armed robbery. In June 2015, when he was 16, he was charged with three counts of aggravated robbery over accusations that he and an unidentified accomplice held up three people for about $115 and an iPhone around East Greenway Drive in Pine Bluff about a week earlier. Reynolds was named as the gunman by one witness.

While awaiting trial, he was arrested again in March 2016 after a security officer at Pine Bluff High School, alerted that a teenager had a gun on the grounds and saw him with a pistol in his pocket, court filings show. Reynolds was arrested after police stopped a car Reynolds was riding in and found a pistol on the floorboard.

He pleaded no contest in August 2016 to misdemeanor theft stemming from the robbery allegations and possession of a firearm on school property, a felony, in exchange for a sentence of three years on probation.

Police say his 22-year-old brother, Kevonta Reynolds, was the third robber but that there's not enough evidence to charge him in Reed's death.

Testifying in an orange jail uniform and handcuffs, Chaffin told jurors that he lied to police at first. Questioned by deputy prosecutor Amanda Fields, he said he came clean only when he realized how much detective Chuck Ray had already figured out about what had really happened.

Chaffin said he had been with the Reynolds brothers and another man, known to him only as Jordan, in Pine Bluff when Terrance Reynolds connected with Reed in Little Rock through Snapchat, the photo-sharing cellphone application, and arranged to buy marijuana from him.

The men never intended to buy anything from Reed and intended from the beginning to rob him, Chaffin said. The robbery was not Terrance Reynolds' idea, Chaffin testified, but Chaffin was vague about who came up with the idea.

"The plan was, I was going to take the marijuana and they were going to back me up," Chaffin said.

Chaffin said the brothers were each armed with handguns while Jordan had an AK-47.

He said Reed -- joined by his friend Bobby Lane Carrell -- took them to the Eagle Hill home of roommates Quinn Chaplin Muller, 22, and Stephanie Waters, 21, to get the drugs. Neither Muller nor Waters were called as witnesses, although jurors have heard testimony that Waters sometimes sold marijuana.

Chaffin said he and the brothers went with Reed to the apartment while Jordan waited by the car with Carrell. Chaffin told jurors that he was unarmed.

He said the shooting began when one of the women in the apartment produced a gun and Kevonta Reynolds tried to take it from her.

Chaffin was shot in the left hand at that same instant, just as someone from across the room started shooting at him and the brothers, Chaffin testified.

The four drove back to Pine Bluff, and Jordan took Chaffin to the hospital, where police found him later that night, Chaffin said. Terrance Reynolds was arrested after another woman in the apartment, Rachael Benson, was able to identify him.