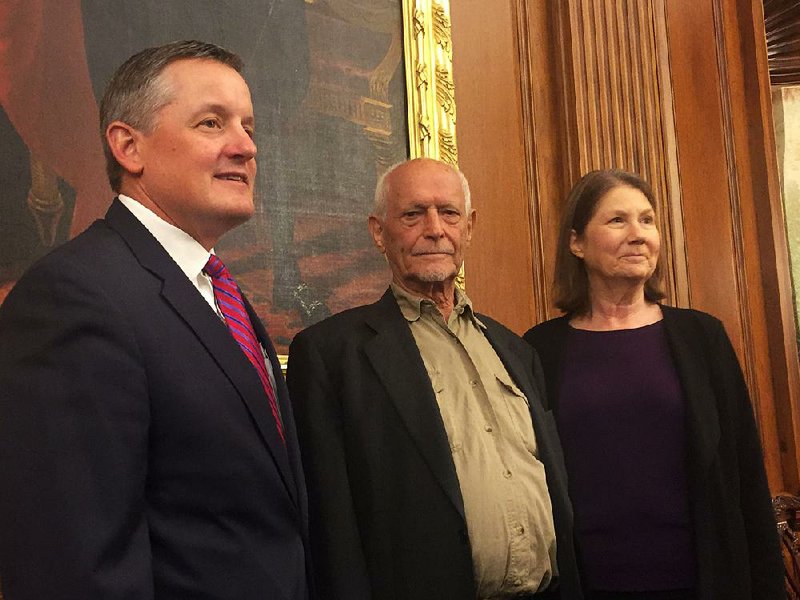 WASHINGTON -- In his poem, "World War II," New York author Edward Field described a "boy from Alabama" who sacrificed his own life while saving Field's in 1945.

But Field's rescuer was actually from Arkansas, an Internet sleuth recently discovered.

So Field, 93, has revised the half-century-old poem and is dedicating it to the memory of Sgt. Jack Coleman Cook of Hot Springs.

On Thursday, with the poet in the visitors gallery, U.S. Reps. Bruce Westerman of Arkansas and Jerrold Nadler of New York recounted Cook's heroism on the House floor.

In his speech, Westerman, a Republican from Hot Springs, called Cook "a true American hero."

Cook's selfless act occurred on Feb. 3, 1945, the day his B-17 Flying Fortress crashed into the North Sea.

Part of the 384th Bombardment Group, the plane was hit by flak during a bombing run over Berlin.

Heavily damaged and leaking fuel, the crippled plane turned around but crashed into the waters on its way back to England.

The crew members all made it off the plane, but they could get only one of the two rafts to properly inflate.

By the time Field got there, all of the seats were taken; there wasn't room for one more. So he clutched onto its side, shivering as his body temperature plummeted.

After 25 minutes, the poet wrote, "I was getting numb, I said I couldn't hold on anymore, and a skinny kid from Arkansas, the ball turret gunner, got out of the raft into the icy water in my place, and I got on the raft in his."

Cook eventually made it to the second, partially inflated raft, but by the time help arrived, he was dead.

The poem described Cook as "that boy who took my place in the water who died instead of me I don't remember his name even."

Field, the plane's navigator, said he'll never know why the Arkansan would make such a sacrifice.

"It was just an incredible thing he did. [I] don't understand it," he said in an interview.

Without Cook, "I would've been dead. No doubt," Field said. "It was ice water. It was February in the North Sea. You didn't see icebergs but it [felt] like that."

Field, an Academy Award-winning writer and the author of a dozen books of poetry, has received a variety of honors for his work.

The opening line of his poem, "World War II," was included in The Oxford Handbook of British and Irish War Poetry.

Field may not have known Cook's name but he never forgot Cook's generosity.

Not too long ago, he contacted a website, 384thbombgroup.com, and asked if there was any way his rescuer's sacrifice could be recognized.

"Edward actually wrote in ... and said, 'I'm 93 years old and I've been thinking about this boy that saved my life all these years and do you know of a way that I could have him honored?" said Cindy Bryan, an Ocala, Fla., woman who blogs and writes about World War II.

Bryan, whose father was a prisoner of war in World War II, agreed to tackle the task.

She was able to determine Cook's identity and to track down his hometown and the names of relatives -- all deceased.

Eventually, she was introduced to David Olive, a Washington lobbyist and former Fort Smith resident. He helped put her in touch with Westerman.

After hearing the story, the congressman agreed to help. Last month, Westerman placed a tribute to Cook in the Congressional Record.

On Thursday, with Field looking on, he paid homage again to the fallen soldier.

In an interview, Field said he is glad that Cook's sacrifice has been acknowledged. But he's disappointed that he's been unable to locate any of Cook's family.

"It's very strange that no relation has turned up. ... They're definitely out there. There's got to be people," Field said. "I hope this alerts them."