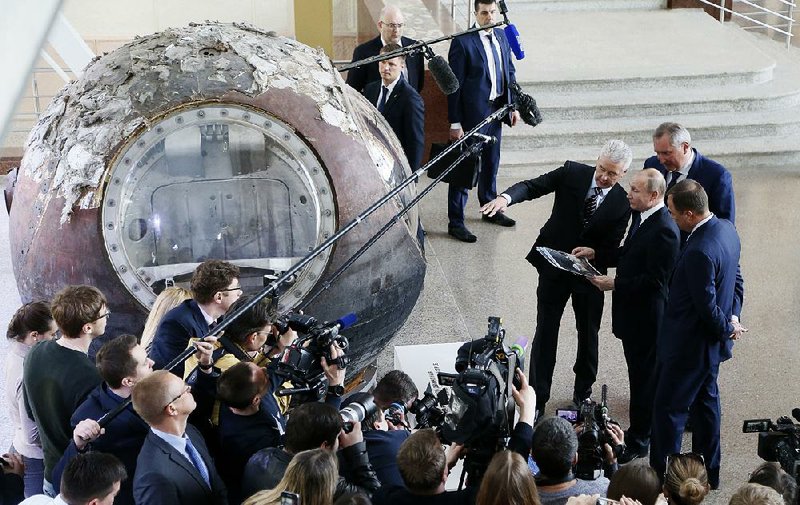 Russian President Vladimir Putin (center) is given a tour Thursday of the space pavilion at a Moscow exhibit on national economic achievements.

PHNOM PENH, Cambodia -- The U.S. Embassy in Cambodia has issued a security alert over an apparent plot to set off a bomb during the country's traditional New Year holiday, which runs from Thursday through Monday.

The alert advises U.S. personnel to exercise caution around Wat Phnom, a temple in Phnom Penh said by Cambodian officials and media to be the target of a plot by the Khmer National Liberation Front, an overseas anti-government group.

Prime Minister Hun Sen on Tuesday publicly warned of the alleged plot, saying strengthened security measures would ensure safety. He has repeatedly claimed before a general election in July that his political opponents seek to cause unrest, in what is generally seen as an effort to disrupt their ability to organize and function freely.

The alert was posted on the embassy's website and social media outlets.

Embassies for the U.S. and other Western nations tend to err on the side of caution in issuing such warnings.

CAIRO -- Egypt and Russia resumed direct flights Thursday, more than 2 ½ years after they were suspended in the wake of a bombing that took down a Russian passenger plane over the Sinai Peninsula.

EgyptAir said in a statement that its Moscow-bound flight took off Thursday from Cairo and that it will operate three such flights a week. Earlier, an Aeroflot flight from Moscow carrying 124 passengers arrived in Cairo.

The move comes after prolonged negotiations, multiple Egyptian airport inspections and the inking of security agreements to take Russian tourists back to Egypt to revive the country's reeling industry.

Moscow suspended flights after the 2015 attack, which killed all 224 people on board and was claimed by the extremist Islamic State militant group. Russian officials said then that a homemade explosive device was detonated on board the plane, which had taken off from the main Sinai resort city of Sharm el-Sheikh.

WARSAW, Poland -- Poland's government plans to spend up to $8.8 billion by 2028 on cleaner heating as part of its efforts to fight smog, the Polish prime minister said Thursday.

Mateusz Morawiecki spoke at a government committee in charge of fighting air pollution under a new "Stop Smog" program.

The World Health Organization says that 33 out of Europe's 50 most polluted cities are in Poland, including Krakow and cities in the southern Silesia coal mining region. Air pollution is highest in winter, when individual households use cheap coal and fuels or even trash for heating. Authorities release air quality reports for most cities, and some Poles wear masks when the smog level is high.

The government wants to co-finance household insulation and the purchase of cleaner heating systems, hoping that will significantly cut down the pollution.

MOSCOW -- Russia wants to continue international cooperation in space and won't break off programs with the U.S. in retaliation for its latest economic sanctions, President Vladimir Putin said.

"We aren't going to break off anything here or leave these programs," Putin said Thursday during a visit to a space exhibition center in Moscow to mark Cosmonauts' Day. "We have the technology and the desire" to take part in projects that Russia has with the U.S., European Union and Japanese partners to explore the moon and Mars, he said.

The U.S. relies on Russia's space agency, Roscosmos, to ferry astronauts and equipment to the International Space Station, paying $2.6 billion for the use of Soyuz rockets since the National Aeronautics and Space Administration retired its fleet of space shuttles in 2011.

Private companies including Elon Musk's Space Exploration Technologies Corp. and Boeing Co. plan to test manned craft later this year that could end the U.S. dependence on Russia by the time the agreement expires.