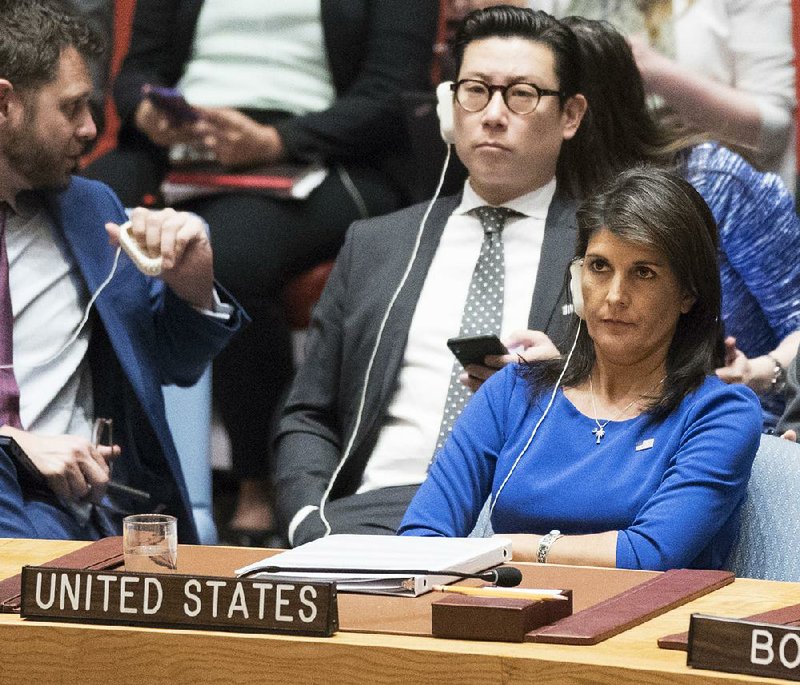 Nikki Haley, U.S. ambassador to the United Nations, listens Saturday at the U.N. headquarters as Syria’s representative Bashar Jaafari condemns the targeted strikes on his country.

WASHINGTON -- Defense Department officials said Saturday that U.S.-led strikes against Syria had taken out the "heart" of President Bashar Assad's chemical weapons program, but acknowledged that the Syrian government likely retains some ability to again attack its own people with chemical agents.

Warplanes and ships from the United States, Britain and France launched more than 100 missiles at three chemical weapons storage and research facilities near Damascus and Homs, the officials told reporters, in an operation that President Donald Trump and Pentagon leaders hailed as a success.

"A perfectly executed strike last night," Trump wrote Saturday on Twitter. "Thank you to France and the United Kingdom for their wisdom and the power of their fine Military. Could not have had a better result. Mission Accomplished!"

His choice of words recalled a similar claim associated with President George W. Bush after the U.S.-led invasion of Iraq. Bush addressed sailors aboard a Navy ship in May 2003 alongside a "Mission Accomplished" banner, just weeks before it became apparent that Iraqis had organized an insurgency that tied down U.S. forces for years.

The strikes before dawn Saturday in Syria -- which came in retaliation for a suspected chemical attack on civilians a week ago -- were the second time in just over a year that Trump has sent missiles crashing into Syrian military targets, adding U.S. firepower to a civil war that is one of the most complex and multisided conflicts in a generation.

Beyond the immediate question of whether the new strikes actually accomplished the stated goal of diminishing Syria's capacity to make and use chemical agents, the attack posed the risk of drawing the United States more deeply into a conflict in which Russia and Iran are more invested than ever in keeping Assad in power.

Ayatollah Ali Khamenei, the supreme leader of Iran, called the strikes "a crime" and the leaders of the United States, France and Britain "criminals."

The United Nations Security Council met Saturday to debate the strikes but rejected a Russian resolution calling for condemnation of the "aggression" by the three Western allies.

U.S. Ambassador Nikki Haley told the Security Council that Trump said the United States is "locked and loaded" to strike again if Assad is believed to renew his use of chemical weapons.

"We are confident that we have crippled Syria's chemical weapons program. We are prepared to sustain this pressure, if the Syrian regime is foolish enough to test our will," Haley said.

She said Russia had failed to abide by a 2013 promise to ensure that Syria got rid of its chemical weapons stockpiles.

"While Russia was busy protecting the regime, Assad took notice," she said. "The regime knew that it could act with impunity, and it did."

The Pentagon provided no immediate evidence that the sites that were struck were producing substances covered by the 2013 agreement between Russia and the United States to eliminate Syria's chemical arms.

Defense Secretary James Mattis said Friday that the U.S. government was confident that Syrian forces had used chlorine in the deadly attack on civilians April 7 in Douma, but he did not provide evidence.

The White House has cited photographs and videos from Douma to make the case and has dismissed alternative explanations from the Syrian and Russian governments. It said the nerve agent sarin may have been used in addition to chlorine.

A group from the Organization for the Prohibition of Chemical Weapons, which had announced a fact-finding mission to determine if chemical weapons were used in the Douma attack, arrived in Damascus on Saturday morning, the group said in a statement.

Meanwhile, more details began to emerge from the Pentagon on Saturday about the three targets.

The U.S.-led coalition hit the Barzah Research and Development Center outside Damascus with 76 missiles, destroying the facility and setting back Syrian chemical weapons capabilities "for years," the U.S. military said in an initial assessment.

"We deployed 105 weapons against three targets that will impact the Syrian regime's ability to develop, deploy and use chemical weapons in the future," Marine Corps Lt. Gen. Kenneth McKenzie Jr., director of the Joint Staff, said during a news conference Saturday morning. He described the facilities as "fundamental components of the regime's chemical warfare infrastructure."

A statement by the Syrian military said 110 missiles had been fired in the U.S.-led strike. Three people were injured in Homs, it said. Videos from Damascus showed Syrian air defense missiles launching into a dark night sky, and the Russian military said that at one Syrian air base, all 12 cruise missiles that targeted the site had been shot down.

Defense Department officials batted down those claims, saying that the entire U.S.-led operation was over, and the targets were destroyed before Syria launched any of the 40 missiles it fired into the air.

"Taken together, these attacks were able to overwhelm the Syrian air defense system," McKenzie said at a news conference. "None of our aircraft involved were successfully engaged by Syrian defense forces."

He added that the barrage of missiles had hit its targets within a couple of minutes at most. He said all three targets had been destroyed, and that all warplanes had returned safely to base.

But the strikes were limited, with an eye toward making sure they did not draw retaliation from Russia and Iran and set off a wider conflict. For that reason, Assad may still be able to use chemical agents in the future.

"I would say there's still a residual element of the Syrian program that's out there," McKenzie said. "I'm not going to say that they're going to be unable to continue to conduct a chemical attack in the future. I suspect, however, they'll think long and hard about it."

In a statement, the British government said Prime Minister Theresa May, President Emmanuel Macron of France and Trump had agreed in separate phone calls that the military strikes had been a success, "sending a clear message that the use of chemical weapons can never become normalized."

European Union foreign-policy chief Federica Mogherini said the bloc "supports all efforts aimed at the prevention of the use of chemical weapons." Still, the European Union's goal is to prevent an escalation of the conflict, Mogherini said, calling for an immediate cease-fire and a "genuine political transition" in Syria. She urged Russia and Iran to help prevent any further use of chemical weapons by Assad's regime.

Support from elsewhere in Europe was more muted, with Italian Prime Minister Paolo Gentiloni saying his country didn't provide its usual logistical support to Western military operations in the eastern Mediterranean. He described the attack as "measured."

Germany also did not take part, although Chancellor Angela Merkel issued a statement backing the action. Two U.S. planes from a base in Spain provided logistical support, the Spanish Defense Ministry said.

China's Foreign Ministry said it objected to the use of force and warned that it could complicate the situation in Syria.

Turkey, a NATO member with forces in northern Syria fighting Kurdish militants, welcomed the strikes and described them as a proper action against the Assad regime.

Israel Housing Minister Yoav Galant, a member of the coalition's Kulanu party, said on his Twitter page: "The American attack is an important signal to the axis of evil -- Iran, Syria and Hezbollah -- a signal that says the use of chemical weapons crosses the red line against humanity and will not be tolerated."

In a statement released Saturday, Republican Rep. French Hill of Little Rock said, "The multinational nature of the strikes, with American, British, and French forces engaged in this mission, demonstrates, combined with the targeted strike of April 2017, that the failed international approach of the previous six years is over."

Republican U.S. Sen. John Boozman of Rogers said in a statement Saturday that chemical attacks "must be met with aggressive action" and that the strikes "delivered that message in a very measured and direct manner."

Boozman also called on Russia and Iran to end their support of Assad.

But the limited nature of the strikes left other members of Congress and some observers underwhelmed.

"I fear that when the dust settles, this strike will be seen as a weak military response and Assad will have paid a small price for using chemical weapons yet again," Sen. Lindsey Graham, R-S.C., a member of the Armed Services Committee, said in a statement. "Assad has likely calculated a limited American strike is just the cost of doing business."

There were no signs of immediate retaliation, suggesting that Assad and his allies planned to weather the storm, perhaps in the belief that the United States was mostly concerned with avoiding deeper involvement.

"If I were Assad, I would be thinking, 'Let them get it out of their system. Things are still trending in the right direction today,'" said Faysal Itani, a senior fellow at the Atlantic Council. "Nothing that Trump said on television really touched on the Syrian conflict."

Randa Slim, an analyst at the Middle East Institute, tweeted: "If this is it, Assad should be relieved."

Sure enough, early Saturday morning, Assad's office posted a video that appeared to show him strolling into work as if nothing had happened.

The televised image of Assad walking toward his office, briefcase in hand, matched the rhetoric the Syrian government put out soon after the strike: The second U.S. attack in a year in response to suspected chemical weapons use has failed to rattle the regime, and the president is in control.

Hundreds of Syrians poured into the streets of Damascus on Saturday, dancing and chanting in defiance of what they called the West's "failure" to shake their nation's resolve with airstrikes.

The demonstrations in support of Assad were carried live on state TV, which also reported that Syrian air defenses had intercepted most of the missiles fired by the United States, Britain and France to punish Syria's purported use of chemical weapons. The broadcaster also urged people not to believe media reports that exaggerated the results of the airstrikes.

"We are not scared of America's missiles. We humiliated their missiles," said Mahmoud Ibrahim, who waved a Syrian flag as he hung out of his car window.

In announcing the strikes Friday night, Trump suggested that more U.S. action could be on the way. "We are prepared to sustain this response until the Syrian regime stops its use of prohibited chemical agents," Trump said. Other officials, however, said the United States and its allies are done for now.

Trump made it clear when announcing the strikes that he does not consider it the job of the United States to fix problems in the Middle East.