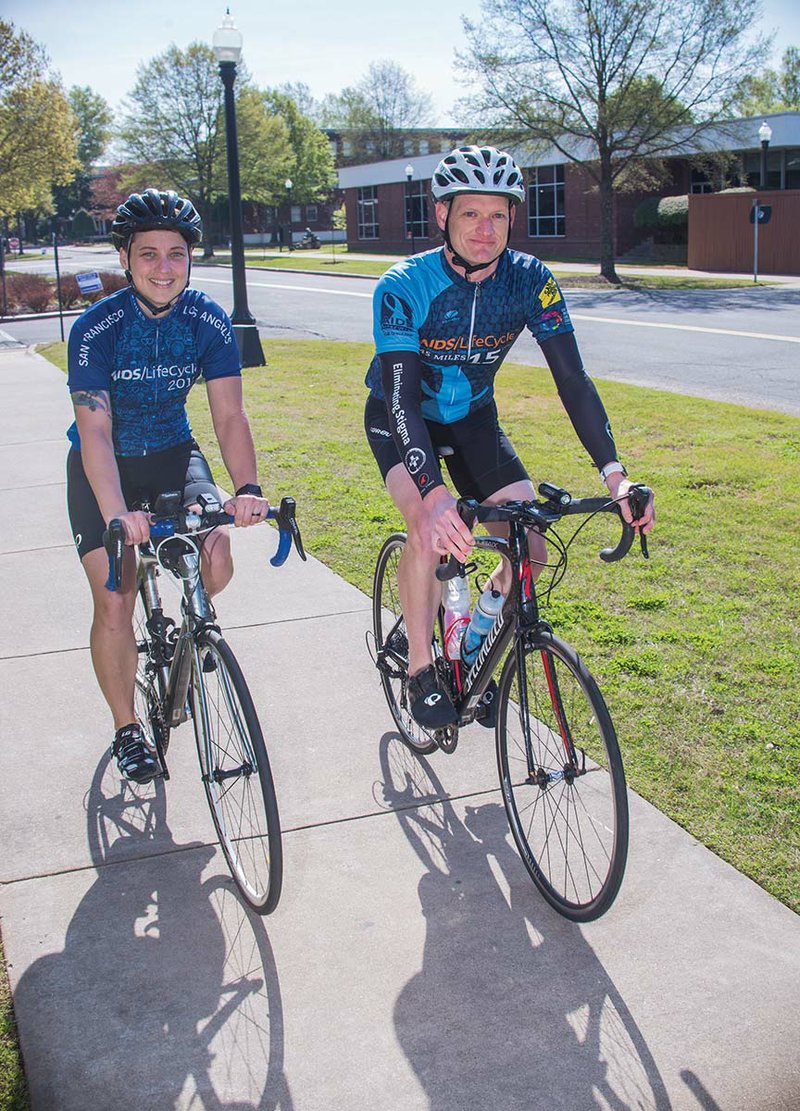 Sarah Garrett-Jones, left, and Jeremy Crabb, both of Conway, prepare to train for the 545-mile AIDS/LifeCycle ride, starting in San Francisco, California. Garrett-Jones, a University of Central Arkansas police officer, and Crabb, a full-time UCA student and former campus police officer, are raising money prior to the event. More information is available, and donations may be made at tiny.cc/jcrabb or tiny.cc/sarahalc.

Jeremy Crabb and Sarah Garrett-Jones rode 100 miles on their bicycles on a recent Saturday, but that’s nothing compared to the ride they’ve signed up for in June.

The Conway friends will again participate in the 545-mile AIDS/LifeCycle charity ride June 3-9 from San Francisco to Los Angeles. They each have a goal to raise $5,000 for the event.

This is the fourth time Crabb, 38, has made the challenging ride.

“Every year that I’ve done it, it’s become more special to me and more personal, just because of the connections I’ve made with people and the good that I’ve seen come from the work of the foundation and the center,” he said.

The AIDS/LifeCycle raises money and awareness for the San Francisco AIDS Foundation and the Los Angeles LGBT Center.

Crabb said the ride shows the importance of what those groups are doing is helping their local areas, as well as helping “HIV research, care and policy throughout our country.”

Garrett-Jones, 36, said she is participating with Crabb for the second consecutive year.

She is a sergeant in the University of Central Arkansas Police Department Patrol Services Division. Crabb was a UCA police officer for about 18 years before becoming a full-time student this fall.

Garrett-Jones said Crabb encouraged her to participate in the ride last year.

“So, last year it was more about the physical challenge. I’d never done anything before like that in my life; I wasn’t a cyclist,” she said.

She bought a road bike just a few months before the ride and started training with Crabb.

She said it was “eye-opening to see how many people are affected [by HIV/AIDS], but they just don’t talk about it.”

As Garrett-Jones was raising money for the ride last year, she found that people whom she’d known for years had been affected by HIV/Aids.

A friend in Arkansas whom she’d known for 10 years shared with her that he was HIV positive.

“I had no idea he was HIV positive. It’s not something he tells a lot of people because of the stigma attached,” she said. “A couple in church said their son passed away from the AIDS epidemic.”

Garrett-Jones and Crabb said the upbeat atmosphere and energy at the ride are hard to describe.

‘It’s really like nothing else I’ve experienced,” Crabb said.

“The purpose is so, so very personal, and the passion is so very palpable for so many people in that group in that community,” Crabb said.

“It’s like a moving city down the coast. At night, we will camp in tents. It takes about 1,700 tents to accommodate 2,500 riders” and the hundreds of volunteers, he said. “Mornings are cold, but most days, by afternoon, it heats up pretty warm.”

Garrett-Jones agreed that the ride is a unique experience.

“It’s hard to put into words,” she said. “The energy you get from all the people who are there to serve the same mission, to accomplish the same goal — it is overwhelming in a positive way.”

She said more than 3,000 people are at the event, including the riders and volunteers.

“All those people are there for the same reasons. You don’t ever meet a stranger,” she said. “Everybody’s your new best friend, even though you’ve never met them before in your life.

“It’s a huge physical task, but it was a lot easier than I expected it to be, not because it wasn’t physically challenging, but when you’re surrounded by that positivity, it pushes you to survive the ride.”

Garrett-Jones said that when she got to California and in the mix, she saw what the organization does, heard stories from other riders and saw firsthand how the money raised by the ride is helping all over the country, not just in California.

“I saw the work they do and how it does genuinely save lives,” she said. “It’s not just about the money, but it’s about the awareness it brings to the stigma around HIV.”

Crabb agreed with Garrett-Jones that the ride is life-changing.

“It just really grabs onto your heart and gives you — no matter what your background or how affected you may or may not be by HIV/AIDS — being around those people and part of that purpose for that week just locks onto your heart. You can’t help but do everything you can to spread the awareness and battle against the stigma people experience still.”

Crabb knows that feeling because he is gay. He is not HIV positive. However, he found support from his family and friends.

“The first year that I did the ride, I was pretty nervous about going out into the community here, even talking to people I know,” he said. “I thought part of what we’re trying to do here is overcome stigma and show there are enough people who care about the cause and people affected that we have to rise above it.

“I’m not ashamed at all to go out and be part of the effort to raise money for this cause.”

Donations may be made by going to tiny.cc/sarahalc.

Crabb said anyone who wants more information about the event can contact him at jcrabb.alc@gmail.com.

The bottom line, he said, is “hopefully, one day very soon, we will achieve the ultimate goal of a world with no more HIV infection [and an acceptance of others].”