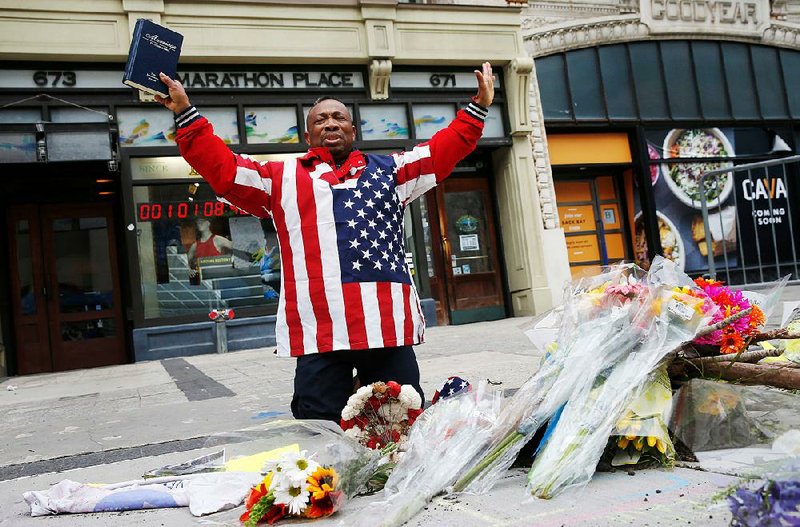 Cristopher Nzenwa, of Boston, prays at the site of the ﬁrst explosion during the 2013 Boston Marathon on Sunday. Today’s running of the Boston Mara-thon comes ﬁve years after the bombing.

BOSTON -- It was a day filled with service and commemorations in honor of victims and survivors of the deadly Boston Marathon bombings five years ago.

Boston began the fifth anniversary of the attacks Sunday with Mayor Marty Walsh and Gov. Charlie Baker laying wreaths early in the morning at the spots along downtown Boylston Street where two bombs killed three spectators and maimed more than 260 others on April 15, 2013.

Both addressed families and survivors at a private ceremony inside the Boston Public Library.

"On April 15, 2013, our city changed forever, but over the last five years we have reclaimed hope. We have reclaimed the finish line and Boston has emerged with a new strength, a resilience rooted in love," Walsh said.

Jane and Henry Richard, siblings of the youngest victim Martin Richard, and members of the family's foundation, also spoke.

Henry Richard urged those listening to follow Martin's message to "choose kindness and do more." The family's foundation was founded in 2014 to connect young people with opportunities for volunteerism and community engagement.

Victim Lu Lingzi's uncle, Sherman Yee, was present at the ceremony and private gathering. He said, "The family has been overwhelmed by love and support from all over the world." He called Lingzi an "extraordinary girl" who represented the youth that come to the U.S. from China to study.

"While she didn't realize her dreams, as her family we invest in the youths through our foundation to keep her memory going," he said.

The bombs also killed Krystle Campbell, 29, of Arlington. Massachusetts Institute of Technology police officer Sean Collier was killed in the line of duty during a confrontation with bomber Tamerlan Tzarneav.

Roxanne Simmonds was at commemorative ceremonies to honor her son, fallen Boston police officer Dennis Simmonds. Simmonds suffered a head injury on April 19, 2013, during a shootout with Dzhokhar and Tamerlan Tsarnaev as law enforcement officers closed in on them.

He suffered a fatal brain aneurysm a year later assessed to be the result of his injuries from the explosive device. Roxanne Simmonds said "DJ" was "brilliant and fearless -- he just loved Boston."

The youngest graduate of his class at Lasell College, Dennis Simmonds worked in Mattapan as an officer.

"It was important for him to be in a community with men and women who look like him," his mother said. "Individuals of color working hard to make sure their communities were safe." She praised Walsh, saying that it was obvious how significant the victims are to the mayor.

Arreen Andrew of Boston said she was in the crowd across the stand when the first bomb went off in 2013.

Five years later, while the day is still a reminder of some painful memories, she said it has also become a day about the relationships that have since been formed and "reformed and recreated our entire community."

At 2:49 p.m., the bells of Old South Church rang as Boston held a citywide moment of silence to mark the moment five years ago when the first bomb exploded. Sunday was "One Boston Day," devoted to blood drives and acts of kindness.

Security is tight for today's 122nd running of the iconic race. 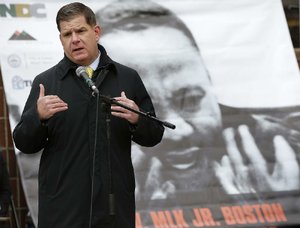