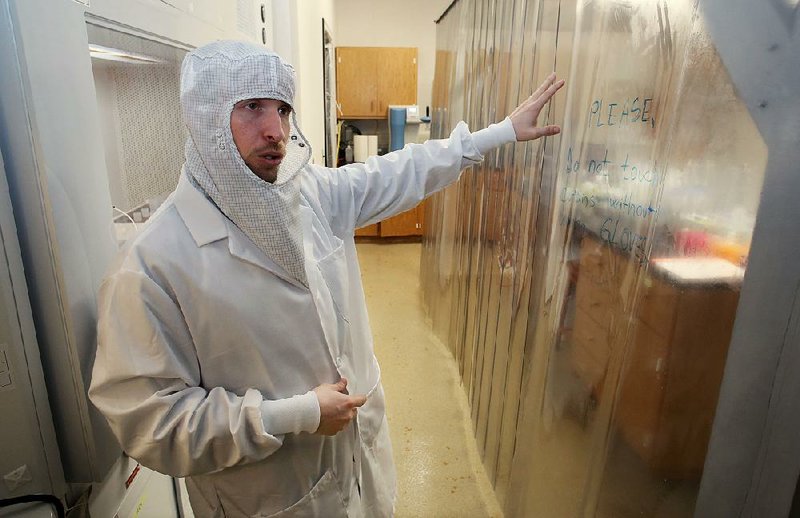 John Samuelsen describes the workings of the ultra-clean, metal-free radiogenic isotope laboratory at the University of Arkansas, Fayetteville’s Department of Geosciences, where he and other researchers will study bones found at the ancient Caddo Indian burial site.

John Samuelsen hopes to solve the mystery of Crenshaw.

The prehistoric Caddo village in southwest Arkansas has a burial ground that contains at least 114 human skulls and 238 additional jawbones.

Since its discovery in the 1960s, researchers have debated the meaning of the skull-and-mandible cemetery, as it has come to be known.

Many of them believe that it contains trophies of war -- heads and jawbones of enemies from far-away battlefields.

But in 2016, Samuelsen, a doctoral candidate at the University of Arkansas, Fayetteville, argued strongly for a different hypothesis.

He published a paper in the Journal of Archaeological Science saying the burial ground could contain the remains of people, or their relatives, who lived around Crenshaw, possibly farming the more rural areas. After they died, their skulls and jawbones could have been returned to the village for ceremonial burial, similar to the custom today of the deceased being returned to family plots or church cemeteries for burial.

Transporting only skulls and jawbones would have been easier than carrying back bodies or full skeletons, especially at a time before the Caddo had horses.

Crenshaw was a large ceremonial center from about A.D. 700 to 1400 along the Red River in Miller County. It also was a large village for most but not all of that time, Samuelsen said.

Around A.D. 900, the Fourche Maline culture at Crenshaw began to decline with the beginning of Caddo cultural traditions in the area, according to the Encyclopedia of Arkansas History & Culture.

"After about A.D. 1000 and for the next 400 years, the site is thought to have been used primarily as a ceremonial center, occupied by only a few Caddo elites and their families," D. Glen Akridge of the Arkansas Archeological Society wrote for the encyclopedia. "The dispersed Caddo population may have returned to Crenshaw at various times during the year to conduct ceremonies, to bury their dead among relatives at their ancestral homeland, and to mark special occasions."

"I guess you could draw an analogy with the big cathedral towns of medieval Europe," said George Sabo III, who is chairman of the board of trustees for the Caddo Heritage Museum in Binger, Okla.

Sabo is also director of the Arkansas Archeological Survey, part of the University of Arkansas System that studies and protects archaeological sites in the state. He's Samuelsen's boss and graduate adviser. Samuelsen has worked for the survey since 2004.

Samuelsen, 36, of Tampa, Fla., has developed a method of examining lead isotopes in tooth enamel that he believes will determine whether the remains in the skull-and-mandible burial ground belonged to locals. It will be employed in conjunction with a method that he has previously used to examine strontium isotopes in tooth enamel. Lead has six isotope ratios, compared with one for strontium, making it a better marker for the research.

If the remains of local people are buried in the burial site, the lead and strontium isotopes in their tooth enamel should correspond with those of non-migratory animals that lived in the same area at about the same time, Samuelsen said.

Lead and strontium are elements that occur naturally and would have been in the soil and plants. Humans and animals were both eating plants in the same areas, so it doesn't matter if they weren't eating the same plants, Samuelsen said.

"You're assessing the human's location based on the ratio of lead in animal teeth," he said.

The research will include tooth enamel from deer, rabbits, possums, raccoons and squirrels. Some of the enamel samples will come from as far away as Illinois.

The university in Fayetteville is one of the few places that has equipment capable of doing the research, said Samuelsen, referring to a Nu Plasma multicollector inductively coupled plasma mass spectrometer, which measures how much of each isotope is present in lead or strontium.

Samuelsen will work closely with Adriana Potra of the UA's Department of Geosciences because some of the isotopic work will be done in that department's metal-free radiogenic isotope laboratory. It's a "room inside a room" with HEPA-filtered air. Lead contamination is common now, so it's important to conduct the research in a clean-lab environment.

Other UA researchers who will be involved in the project include Erik Pollock and Barry Shaulis.

Samuelsen has received a $14,750 grant from the National Science Foundation to do the research, which he estimates will take a year and a half.

He did a pilot study involving five samples from the skull-and-mandible burial site, 13 burials at Crenshaw of entire bodies and samples of tooth enamel from 56 animals in southwest Arkansas.

Samuelsen said the pilot study verified that his method of analyzing biologically available lead works, but the full study will include 60 additional samples from the skull-and-mandible burial site and 80 more animals from Arkansas and primarily other states.

Samuelsen said the skull-and-mandible burial ground at Crenshaw is the largest site of its kind in the United States. There are a few smaller skull burial sites in the U.S. and Mesoamerica. He said researchers have generally believed the remains in those sites to be the victims of warfare.

Whether those buried at the skull-and-mandible burial ground are Caddo ancestors is important to the tribe, Sabo said.

"They need to know where the people buried at Crenshaw came from," he said. "If they came from within the region the Caddo inhabited in the past, it's very likely those are the remains of their own ancestors. ... That information is crucial to modern Caddo decisions about how and where to rebury them."

The Crenshaw site is on private property, and researchers try to keep its location a secret. It's not open to the public, but the Caddo Nation has given UA researchers permission to study the site.

The remains of the skull-and-mandible burial ground were uncovered due to farming practices in the 1960s. Then looters dug in the area for some time.

Crenshaw has long been known as an American Indian site. It was explored by Clarence Bloomfield Moore, an amateur archaeologist from Philadelphia, in 1912, according to the encyclopedia article by Akridge.

Arkansas archaeologists conducted official excavations of the Crenshaw site during much of the last half of the 20th century.

Samuelsen said there appear to be at least seven burial grounds at Crenshaw, but the others contain full skeletons.

Researchers unearthed another unique find at Crenshaw: a pile of antlers from at least 1,021 male white-tail deer. 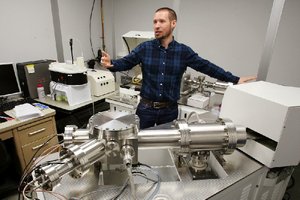 Photo by David Gottschalk
John Samuelsen displays the plasma mass spectrometer at the University of Arkansas, Fayetteville, that he will use in his study of remains at burial grounds around a prehistoric Caddo village in southwest Arkansas. 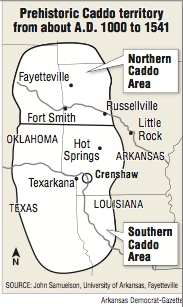